Are you still using your iPhone’s native camera app? If so, you could be missing out. In this article we’ll compare fourteen of the best camera apps for iPhone for you. Each offers something more than the native camera app, improved features or a more intuitive interface.

It’s slightly counter-intuitive – but the best camera app isn’t necessarily the native camera app that comes as standard with your smartphone. This is because photographers aren’t all the same, and don’t all need exactly the same set of camera features. The smartphone manufacturer has to create a single camera app with broad appeal, which is not too difficult to get to grips with. But once you get past taking snaps, you start to see the limitations of native camera apps, and yearn for more features and more control.

Before we look at the alternatives, let’s start out by looking at what the native iPhone camera app has to offer. It’s fair to say that the native camera app is pretty amazing – it has perhaps the most intuitive user interface, several advanced innovative features (Time-lapse, Slow Motion, Pano, Live photos, Portrait mode and Portrait Lighting), and has been developed by a team with full knowledge about the iPhone’s inner workings – meaning the camera app should be nothing short of brilliant. And it is brilliant. For most photographers, in most situations, it does everything very well indeed. However, in order to cater for everyone while still keeping the app simple to use, it has to make assumptions, and reduce the amount of customization available to the photographer.

This iPhone-only app has a clean, intuitive user interface and some neat features which firmly push it towards the Pro end of the spectrum. Most notable, for depth-capable dual-lens iPhones, is the ability to adjust the depth-of-field after taking the shot. The 3D Tiltmeter gives you precise information about how level your smartphone camera is. Anti-shake and low light capability make the most of your photography opportunities. 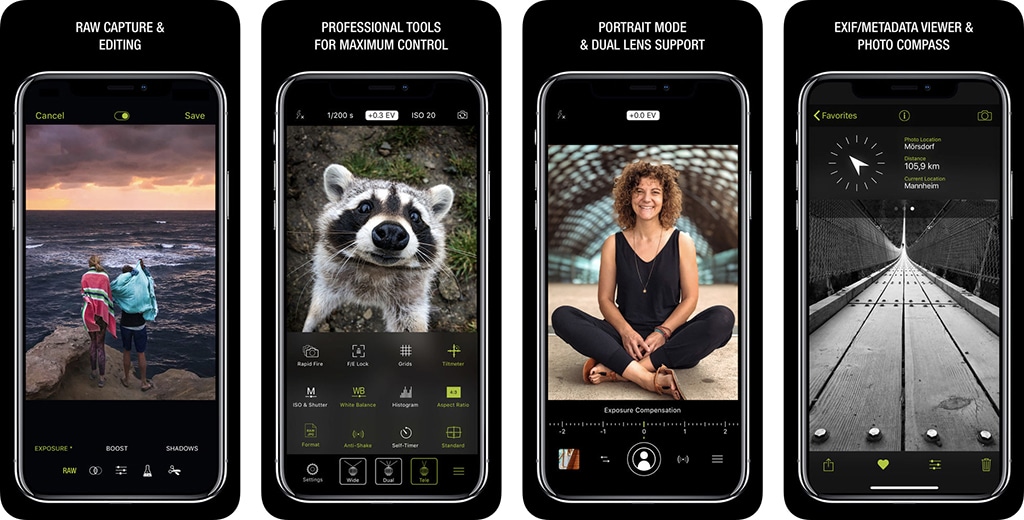 The ProPhoto app running on your iPhone can be controlled from your Apple Watch, as shown below.

Best known for their top-quality iPhone lenses and other accessories, Moment have produced an excellent iPhone camera app too. Now its third version, the Moment’s Pro Camera app gives you full manual control, RAW shooting and a live histogram.

The iPhone-only Blackie camera app is fairly unique in that it forces you to take black-and-white photos. This might sound strange, but this drastic ‘limitation’ is actually its biggest strength. As you compose your shot, you see the scene in black-and-white only, which allows you to concentrate on the light and shade, and indeed the composition.

With perhaps the most minimal user interface of all, the VSCO camera app may not be to everyone’s taste, however its fans are among the most passionate, as testified by the number of people who’ve subscribed to the VSCO Community – an Instagram-like social network. It’s not the most feature packed camera app, but it works well – and a nice feature is being able to select different regions of the scene to control exposure and focus. It features excellent presets for enhancing your images later, but most of these are only accessible via subscription to the VSCO X “Membership Experience.”

The original filter app, Hipstamatic, is still with us after all these years. It goes from strength to strength, and remains popular to this day, perhaps because of its novel approach to photography – with a choice of Classic and Pro camera interfaces, its analog-esque filters and excellent editing features. We love how you can select different lens, film and flash simulations, to get a wide variety of results.

With a distinctive minimalist user interface, the Filmborn camera app is all about the film simulations. However, this doesn’t stop the app being a very capable camera. It features all the usual tools you’d expect, from manual focus to exposure control. Aside from its great film simulations, a killer feature is the Custom Camera Kits, which lets you build your own camera interface to suit your photography.

The rather primitive Provoke Camera app is all about analog nostalgia – with film simulations and a classic interface which harks back film cameras of yesteryear. You can even switch between 126 and 35mm film formats! The film names will mean nothing to the uninitiated, but everything to those in the know. It has a large exposure adjustment slider and a distinctive, large red shutter button. Some have complained about glitches and the app crashing, but it works fine on my iPhone X. You can also import photos taken previously (regardless of which camera app you used) and apply the film simulations to them.

Another slightly quirky camera app is Focus [+]. Its user interface is very innovative, and puts the shutter button slider so that you can control the currently selected feature – zoom (in auto mode), or, in manual mode, exposure or focus, without removing your finger. However, you still have to remove your finger in order to tap the shutter button, so its merits are somewhat muted! In its defence, while you are sliding the shutter button the viewfinder zooms in, allowing you to see the effect of your change to the slider position. This is useful both for manual focus and for checking whether the brightest area of the scene is being properly exposed. You simply move your smartphone camera to ensure the area of interest is in the frame.

With one of the most intuitive and aesthetic interfaces, the Obscura 2 camera app is a joy to use and does everything well. The app layout has been carefully thought out and puts the right controls at your fingertips at the right time, depending on what you’re doing. It’s a fully-featured camera app with the addition of an attractive set of filters. No gimmicks, it’s just a well-designed app which is a pleasure to use.

Another great camera app is Halide which has a really professional feel, and produces professional-looking results. Its killer feature is probably its custom blur which gives a unique bokeh to your portrait images. And considering how many controls they’ve crammed into the user interface, Halide’s developers have done a great job of putting a lot of features within easy reach without compromising either the design or usability. Indeed, it’s very easy to use this app with just one hand.

While the interface isn’t as slick as many of the other camera apps listed here, Tadaa does actually work quite well. This is mainly down to how uncluttered the app is, with just the minimal controls on display. Its default filters are a little on the strong side, but you do have the option to tweak the filter strength, as well as creating masks to control which regions of an image the filter affects. Many more filters and several additional editing tools are available as in-app purchases, but it comes with everything you need.

Strictly speaking, Slow Shutter Cam isn’t a general purpose camera app, but we’ve included it in our list because it does long exposures so well. Extremely popular, highly configurable yet simple to use, it’s an essential app for slow-shutter speed or long exposure work. It works by letting you tell it how many sequential photos you want to take, and how long to wait inbetween shots. The resulting shots are automatically merged into a single photo, yielding amazing light trails, motion blur, light painting, or the ever-popular waterfall photo.

We’ve introduced you to many non-native camera apps – ranging from general purpose camera apps to more specialized ones – such as Blackie with its black-and-white-only approach, and Slow Shutter Cam with its long exposure capability. Each of these apps offer something unique or different to the native app, and while some of them might not be a perfect match for you, it’s likely that at least one will be more suitable for your photography than the native app. Hopefully this article has helped you choose which ones to try out.