Time-lapse photography is the process of taking many photos at regular intervals, usually over a long period of time, and chaining them together to create a video. Traditionally this is a time-consuming and complex task – but many smartphones offer the feature in their native camera app – and there are countless third-party apps available which offer even more control.

In this article we’ll look at iPhone time lapse photography and consider suitable time-lapse subjects, look at a few of these apps and share some tips for getting great time-lapse results.

What makes a good time-lapse subject?

Time-lapse can be thought of as the opposite of slow-motion photography. It speeds things up rather than slows them down. So it’s ideal for creating videos of subjects whose movement is too slow to be noticeable or attention-grabbing at normal speeds. By comparison, slow-motion photography slows down movement that would otherwise be too fast to comprehend or view in a meaningful way.

So, perfect subjects for time-lapse are those that move slowly – perhaps clouds moving across the sky, a sunrise or a sunset, a flower or plant reacting the sunlight, a slug or snail crawling around, snow falling, a snowman melting, ice cubes thawing, river water rising during or after heavy rainfall etc.

Below is my attempt at shooting a time-lapse of the clouds flying across a blue sky outside my house.

In the following example I set up some birthday cake candles in front of a reflective background and shot a timelapse of them melting down.

Slow-moving subjects aren’t the only suitable subject however. You can emphasize intense activity by making it appear faster than real-life – so a busy shopping precinct or traffic junction can look especially busy – even comical – when sped up using time-lapse photography.

Another example of time-lapse photography is stop-frame animation. This can be done in the same way as normal time-lapse photography but you’ll need to use a time-lapse app that lets you specify a suitable interval between shots (giving you enough time to adjust or move the subject or subjects in the frame) – or allows you to manually take each frame – preferably using your remote shutter release so you don’t move the camera accidentally whilst taking each shot. Such apps usually offer an ‘onion-skin’ feature which overlays a semi-transparent version of the previous shot onto your smartphone screen so you can make more precise, accurate adjustments to the subject before taking the next shot.

Here’s the end result made with the OSnap! app.

Time lapse photography usually requires a little bit of forethought. Sure you can just hit the record button but with some planning you can get really great results.

The most important thing to remember is that the resulting time lapse video footage will be much shorter than the duration of the timelapse photography session itself – i.e. from when you take the first frame to the last.  My iPhone gives me 20 seconds of timelapse footage from 5 minutes (300 seconds) of timelapse photography.  This is because video footage is played back at a certain number of frames (or images) per second – and usually far more frames per second than your timelapse app will capture per second. If your timelapse app captures 1 frame per second and video playback is 30 frames-per-second then shooting timelapse for 1 minute will give you just 2 seconds of timelapse video! This varies depending on which app you use and what settings you specify.

There are too many timelapse apps to list them all so I’ve only listed the ones I’ve used below:

This is possibly the simplest implementation timelapse with no customisation or settings at all – apart from the ability set your focus & exposure point (by tapping and holding on the screen) and to choose whether you use the front or rear-facing camera.  Simply press the big red shutter button and the timelapse recording begins. When you’ve finished, press it again to stop.  The video is automatically saved to your camera roll.

Without going into too much detail the frame rate is set dynamically. The longer the timelapse shooting session the less frequent the shots. So, the longer you shoot for the faster the subjects will appear to be moving in the resulting video.

Hyperlapse from Instagram is a nice, simple timelapse app with a great interface but limited customisation. It also features stabilisation. Once you’ve pressed the record button to start the timelapse the elapsed shooting time is displayed along with the length of the resulting video. This is really useful as you can just keep shooting until you reach the desired video length. Once you’ve stopped recording the resulting timelapse video loops over and over until you decide whether to discard or save the video. Before you do this however you have the opportunity to change the timelapse speed. It defaults to 6 times (6x) but you can alter this down to 1x (which is really just normal video) or up to 12x – and anywhere inbetween.

When you’ve saved the video you have the option of sharing to Instagram or Facebook.  It’s a really simple-to-use app with few frills but certainly gets the job done.

OSnap! is my go-to timelapse app. Its features are so extensive I can’t possibly cover them in any detail in this short article.  It’s probably not the best entry-point to timelapse as the interface is complex and the range of features and settings are quite daunting.  It’s fine if you’ve already spent some time making timelapse videos using the more user-friendly apps and are ready for some more control.

The main features that OSnap! offers are project management (so you can have multiple timelapse projects stored as work-in-progress), the ability to add or delete images from the timelapse sequence, advanced triggering options – including sound/noise (great for stop-motion where you can clap to trigger the next shot), onion-skinning (also great for stop-motion), ability to add music,  infinite loop playback, advanced scheduling (up to 48 hours interval) and the ability to access and export all or selected images.

2. Give your project a name, select the orientation and Front or Back facing camera. Tap Create.

3.    Next, tap ‘Adjust settings’ and make sure the following settings are selected.

4.    Set your focus and exposure in one go just by tapping on the screen. Generally speaking this will be on the brightest part of the scene to avoid overexposure. Now lock the focus, exposure and white-balance by clicking each of the three padlock icons at the bottom right of the screen. This will help you avoid flicker or extreme changes in exposure during the timelapse.

7.    When you’re done just tap the round, white stop button.

8.    Tap the down arrow to return to the home screen. Now you can create the timelapse video from the captured images by tapping the ‘Sharing’ icon (bottom left), then tap ‘Create Video’. 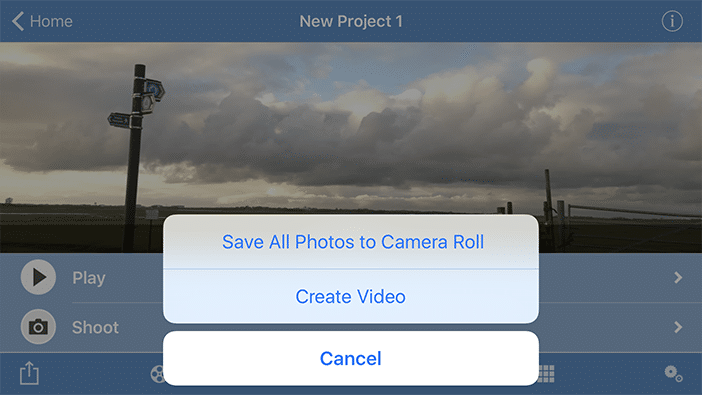 As I said, there’s a lot more to this app but the above steps will get you started.

Tips, tricks and things to consider

It’s likely that the amount of light available will change inbetween each shot you take for your timelapse project. This can result in an undesirable flickering effect in your video footage as the camera app tries to adjust the exposure to ensure the same amount of light is captured. Most timelapse apps allow you to set the exposure by tapping and holding on a suitable area of the screen. If you choose to tap somewhere dark the app will generally over-expose each image. If you choose a bright area the app will underexpose.  It’s a good idea to tap somewhere that is neither too dark or too light as this will give you some headroom either way if your scene becomes darker or lighter during the shoot – but as with regular photography it’s common practice to expose for the highlights to the rule-of-thumb is to select the area of the scene which is brightest.

Usually timelapse photography benefits from keeping your camera in the exact same position for each shot. This results in smooth video footage which is perhaps easier to watch. There are countless tripods from tiny pocket sized versions to full-blown professional equipment. However, you will get attention-grabbing results from hand-holding the camera too – and the Hyperlapse app includes very effective image stabilisation.

Whilst keeping the camera still is the most common way of tackling timelapse photography you can get really interesting results if you mount the camera on something which rotates slowly.  The most convenient way to do this is to use a cheap rotating cookery timer like the one pictured below. It rotates 360 degrees in one hour.

The timelapse video below of vehicles on a roundabout was created using the iPhone, Manfrotto TwistGrip adaptor, a quick-release plate and a cheap rotating cookery timer pictured above.

Why not try reversing your timelapse video so that, for example, a snowman appears to appear out of the ground, or a candle grows rather than burns down?

Timelapse apps rarely (if ever) include any of the original sound in the resulting timelapse video footage. If it did, it wouldn’t sound very meaningful. So why not add some suitable sounds afterwards? Perhaps a favourite song, or some sound effects, or just your voice reciting a favourite poem or quote – or describing the scene. OSnap! lets you do this and many video editing apps also make this possible.

If you’re shooting a timelapse outdoors then make sure you consider the effect of wind on your subjects.  In my cloud timelapse I needed some wind to help the clouds move across the sky but it also made the large tree in the foreground move around a lot.   Decide whether you’re happy with the effects of the wind on your subject and, if you’re not, frame your shots so troublesome subjects are excluded.

For longer timelapse sessions you may find your smartphone battery runs out before you’re finished. The best solution is to have your smartphone plugged into the mains supply using your usual power-supply adaptor / charger. However, if you’re not near a power source for your smartphone there are some things you can do to preserve battery life. The main one is to reduce your screen brightness but also consider closing apps you’re not using and switch of Bluetooth and Wifi connectivity. This might be the difference between a successful shoot and disappointment!

I hope this article has given you the confidence to try creating timelapse videos for yourself or, if you’ve already dipped a toe in the water, to try something more adventurous or challenging.