Five Ways to Add Interest to your Mobile Photography

There are several factors which help contribute to the makeup of a great photograph. Fundimentally though factors such as light, composition and subject matter are generally considered to be key ingredients. Photographer are faced with the challenge of blending these ingredients to create an image that will capture the interest of the viewer, draw them in and hopefully evoke an emotion. It takes a lot of practice and passion to become a master of this art and as Henri-Cartier Bresson once said “Your first 10,000 photographs are your worst”. So to help you on your way and hopefully inspire you, here are five ways that you can add interest into your photography.

One of the best ways to add interest into your photography is to look for lines and perspective in your surroundings. It has long been a common trick used by photographers, painters and artists since the dawn of time to help draw the viewer’s eye into an image. Perspective is an excellent way to add depth into a photograph and it’s one of the basic principles that aid good composition.

Fabio Morbec makes good use of perspective and lines with a series he produced which centres around a covered walkway in sunny conditions. The shadows provide strong lines of contrast that draw the eye to the distance.

Shadows and Lines #2 by Fabio Morbec

I couldn’t talk about the topic of lines and perspective without including an image from Mark T Simmons, a London based mobile photographer and columnist here on Mobiography. His work first caught my eye with his London Underground series. This series of images was based on quiet areas of the London underground and makes excellent use of the perspective provided by the long narrow platforms, stairways and escalators.

Lead Me To The Light by Mark T Simmons

Look for Shape in Things

Shape is another useful way to bring added focus and interest into a photograph. You can use the curves of paths of steps in the same way as with straight lines and perspective to draw the viewer into your composition.

Faithmichaels uses the curves of lines created by some steps against a simple backdrop to create an uncluttered image which draws the eye into and around the photography. The shadow created by the steps also helps to add interest to the image.

Consider going abstract and closely cropping into the smooth curves of contemporary buildings. Stephen Davis makes good use of this technique in his photograph ‘”We watched the sky move sideways…” Steven Wilson’. The dark background of the sky contrasts nicely with the smooth curves of the building which also features the reflections of light. 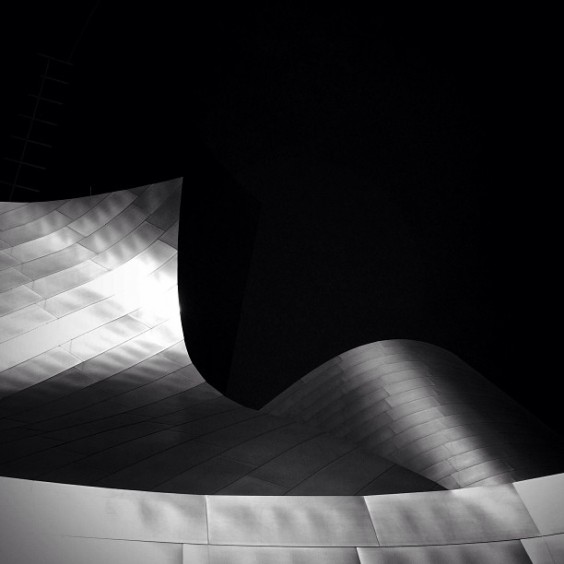 It seems that many people like to shoot in black and white these days. It is a medium which I am a fan of. Don’t forget about colour though especially if you are out in sunny and bright conditions where the colours around you are vibrant and the shadows paint abstract pictures against walls.

Louise Fryer produced a wonderful series of portraits set on the beach which make fantastic use of colour. In the photograph below Louise makes excellent use of the blue sky as a background and contrasts this nicely against the vibrant red of the dress and balloons. A soft filter focus gives added interest to the photograph.

Look for the Contrast in Things

The use of contrast is one of the best ways to give added interest to a photography especially if you are shooting in black and white. With clever use of light and shadow you can easily create a moody composition. This is a technique used widely in street photography.

When applied to other forms of photography such as portraiture it can be equally as powerful a technique such as in this portrait by William Reyes.

Contrast doesn’t have to be about light and dark though. When you are out and about, look for the out of the ordinary things. Those juxtapositions of everyday life can often be equally as powerful and sometimes funny. Comedy is an emothion that can grab everyones attention.

Changing the angle of your photograph also makes a big difference. Instead of shooting at eye level, get down low to the ground. It will give a whole new perspective to a subject. This photograph by Brendan illustrates this perfectly.

Alternatively you could take a high level view of a subject and shoot down. Again, because you are viewing life from an angle that no one really sees that often (if at all) a photograph will take on a whole new look.

These are just five examples of ways in which you can easily add an extra level of interest to your mobile photography. Let us know your tips and tricks on bringing added value to your photography.