Mobiography Photo Challenge: 15 Wonderful Smartphone Photos Of The World Around Me

The theme of last week’s Mobiography Photo Challenge was ‘The World Around Me’. For this challenge participants were asked to share their best photos that captured their surroundings as best they can. The photos submitted did a wonderful job of showcasing urban landscapes, nature and interior scenes. They all illustrate how different photographers have approached this subject.

This week, the theme for the photo challenge is ‘Curves’. For this challenge think about sharing your best mobile photos that capture the beauty of curves – Think arches, spirals, winding roads or pathways.

To enter the challenge simply start sharing your best images on the theme of ‘Curves’ that were taken and edited with a smartphone by using the hashtag #mobiography_50 on Instagram.

‘Les Demoiselles d’Avignon, Picasso‘ by @heidischellenberg – “This photo was taken at the Museum of Modern Art – MoMA, during my visit to New York in october 2018 and the painting is “Les Demoiselles d’Avignon” by Pablo Picasso, on view at the Museum. As I entered the room, I saw this scene, and it seemed to me that the five women in the painting were looking at the five people sitting on the bench watching the five women in the picture. That was what caught my attention and inspired me to make this image, taken with a Samsung S5 mobile and edited with Snapseed.“

Tell all the gang on 42nd Street…

‘Tell all the gang on 42nd Street…‘ by @eerstebabatjie – “Regardless of the time of day or year (in this case a gorgeous afternoon in early spring),Times Square is relentlessly garish and hard-edged and bathed in eerie artificial light. One of the city’s most iconic spaces is also among its least welcoming, and least frequented by people who call this city home. I thought of the old song, “Give my Regards to Broadway,” which says “Tell all the gang on 42nd Street that I will soon be there …” Was it otherwise in 1904, when the song was written and the area was named for the newspaper that had just built its headquarters there, and the street was bustling with horse-drawn carriages? Would there have been a gang of friends waiting in my favorite pub?

This photo was shot on iPhone 6s, and edited in the street on Snapseed and Instagram, and posted a few moments later. I thought the black and white edit accentuated the dystopian feeling.” 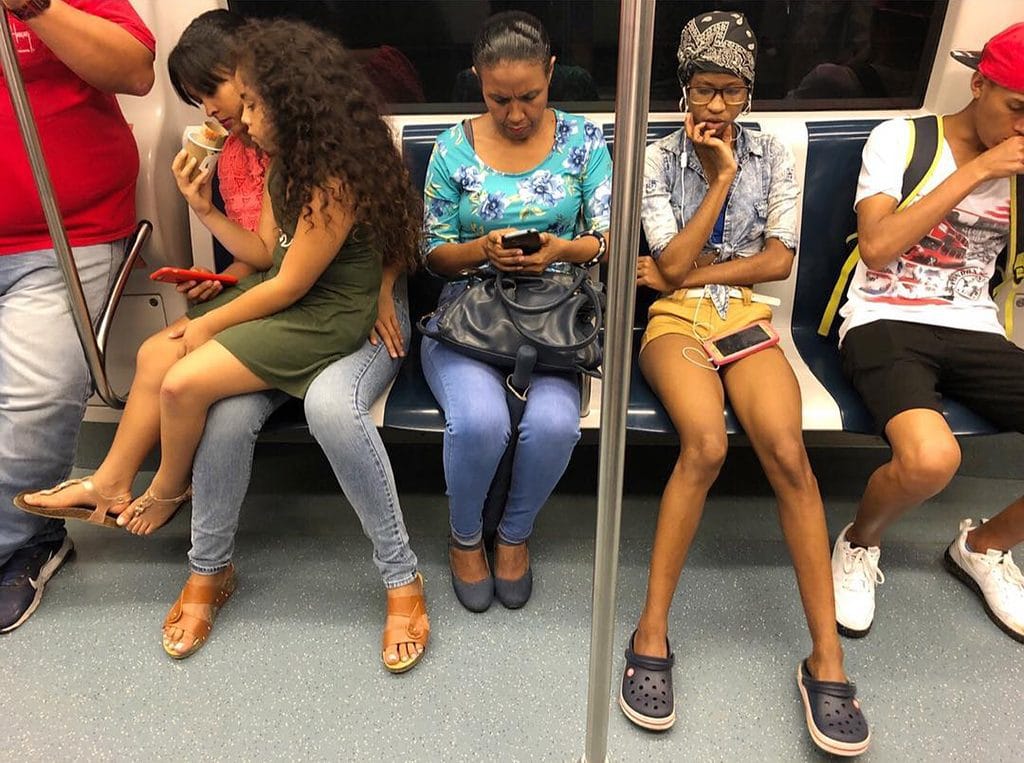 ‘On the Metro‘ by @dixonrayhamby – “This photo was taken of some people riding the metro in Panama. The photo was shot with Procamera, processed with Snapseed and Ultralight.”

‘Untitled‘ by Nadine Funke – “This photo was taken in Berlin Prenzlauer Berg and is one of the typical Berlin shots amongst Berlin Instagramers. Prenzlauer Berg is usually a very busy area and usually it’s hard to find this spot so empty. But last week on a Saturday at 11:30am I was lucky and found it completely empty. I took the photo with my iPhone X and edited it in Enlight and VSCO. “

‘Flat White‘ by @chasread – “The light changed by the minute that morning, filtered through soft mists floating past the tops of tall buildings, and then closer by, over the East River. Luckily for me, my friend Fiona was with me – or else I might have thought I only imagined this little dancer on a stage she had all to herself for a few precious minutes that day.

‘Untitled‘ by @aprilschmit – “I primarily use Snapseed to edit photos and had edited this one a few ways before settling on this image, the truest to the natural tone of the light provided that day in the stairwell. Though we explored and visited so much in the week I was in Germany, this everyday image will stick with me. This simple display in a window that lit the stairwell stirs for me the memory of visiting my friend (though it could be from anywhere.) We passed by this window daily as we walked up to her apartment where good food, conversation, warmth and rest awaited. Almost there, the plants beckon, only two more flights….”

A few more views of tonight’s horizon on fire… 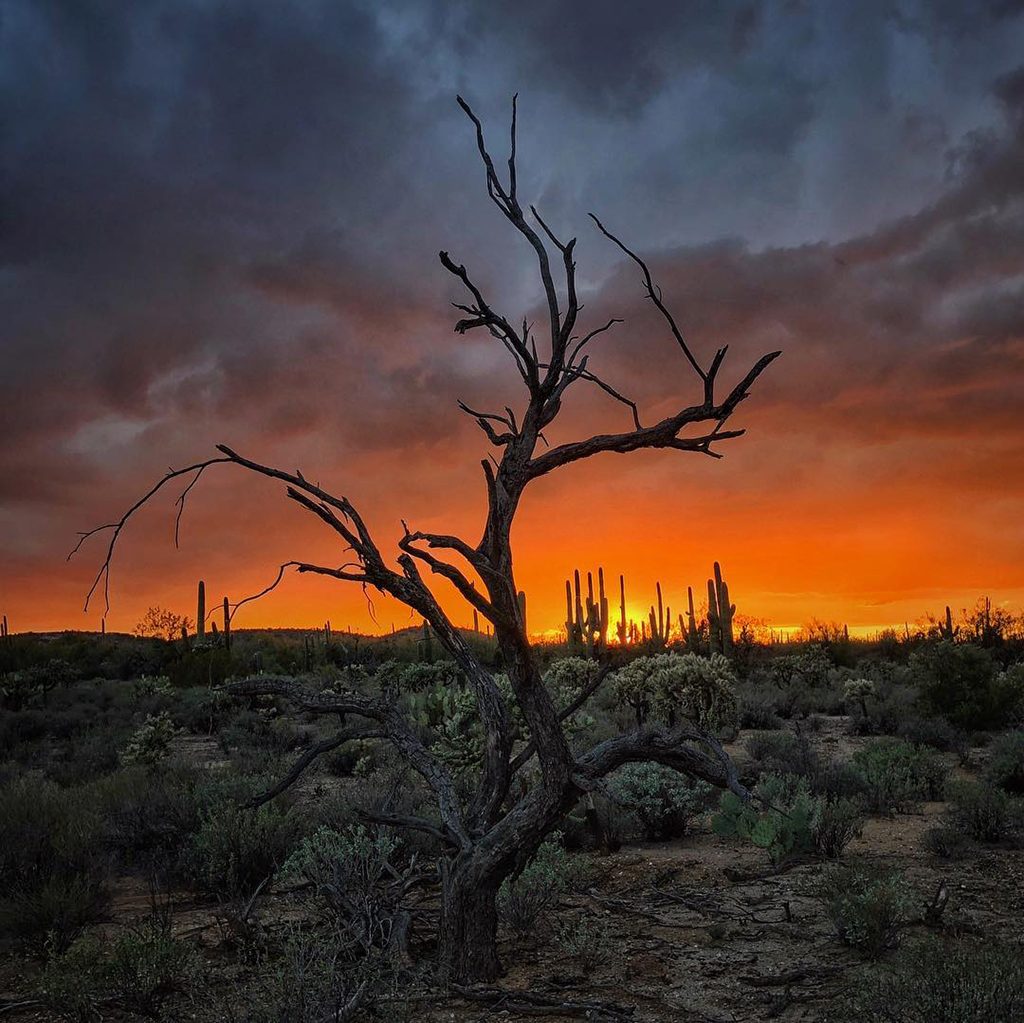 ‘A few more views of tonight’s horizon on fire…‘ by Joseph Cyr – “I almost always have my iPhone with me when I go for runs in the desert after work. There are certain spots where the sunset lines up with certain groupings of trees and cactus at certain times of year, and if the clouds are just right, if I time my run just right, and if I can end up at the right spot at the right time, magic happens. This particular mesquite skeleton has caught my eye for a few years now, and at the end of a recent cloudy day, I thought that the horizon just might light up at sunset. I’m glad I decided to run on this particular trail when I did.

I took this with my iPhoneX, using the native camera app, then used snapseed to brighten the foreground just a little bit so that the texture of the desert vegetation would be visible between the glowing sky and the still-standing remains of this mesquite tree.”

‘Half and half‘ by Ann Hecht – “The first thing we do in the morning is go for a walk. Usually early. This was taken with the rising sun at the end of the beach.
I removed the green dot with Retouch app. I moved on to Snapseed and desaturated, sharpened and tidied up. I like the metallic shine. A bit of gold and a bit of silver. My everyday!”

‘Untitled‘ by @jamove – “The picture was made last september in Rio de Janeiro; with my wife we were in Ipanema Beach having a great time; I saw the surfboarder and I remembered a great song of Antonio Carlos Jobim called surfboard. After then a few touches with the instagram tools and voilá”

‘Untitled‘ by @kaganbastimar – “As a streetphotographer, my eyes always look for interesting scenes on the streets. In Turkey, there are many cats on the streets and when you show them some love, they come back to you with bigger interest. In this photo I wanted to show how big a heart they have by playing with the perspective. By the way this photograph is one of the photos in my silhou’cat’tes series. You can find other cat silhouettes on my profile @kaganbastimar “

‘Golden Hour Serenity‘ by @kats_eye_phone – “While walking with my husband on the wetlands trail at Assateague National Seashore near sunset, the setting sun duffused the entire marsh with a soft and lovely light. The raised walkway allows you to look out over the marsh from a little bit above, and this is the spot where it descends to meet the land. We were the last people on the trail and I snapped this shot at our journey’s end.

The shot was taken with an iPhone 8Plus and processed with Hipstamatic.”

Morning walk in the fog

‘Morning walk in the fog‘ by @lizanderson48 – “One thing that will get me up early in the morning to shoot is fog. This was a particularly heavy fog about two weeks ago at Shollenberger Park, a favorite place for us to walk our dogs.  It is a preserved wetland area and sanctuary for hundreds of birds and water animals. It attracts birdwatchers, runners, hikers, photographers and people who just need a quiet moment.

I took this with my iPhone 7+ and edited it with the Hipstamatic app using the Foxy Lens and Liberty Film. “

‘Untitled‘ by @omertemeltr – “This photo was taken at Firat University in Turkey, and I think it is a powerful image. There is a strong communication faculty with its graph and light. People who added parallel lines and dynamism were caught in slow motion and edited using Lightroom. “

‘An absolutely magnificent day‘ by @reneetakespics

It was a moody kind of walk today on the path

‘It was a moody kind of walk today on the path‘ by @rosiekimages – “The fall morning I shot this image, I awoke to dense fog laying over the canyon behind my house. It was the perfect setting to capture images with moody filtered early morning light. There is a path that leads down into and through the canyon that is accessible only from my house. As the path is private, there is usually no one else on it. This morning, it seems my neighbors dog had found his way to the path… a pleasant surprise. The timing was just perfect for me to catch him walking up the path, therefor adding a special element to my image. I love how serendipitous life can be.”

This week, the theme for the photo challenge is ‘Curves’. For this challenge think about sharing your best mobile photos that capture the beauty of curves – Think arches, spirals, winding roads or pathways.

To enter the challenge simply start sharing your best images on the theme of ‘Curves’ that were taken and edited with a smartphone by using the hashtag #mobiography_50 on Instagram.