Due to the nature of social networking, the single image is increasingly becoming the norm for photo websites and users’ showcases, rather than a full series of work or ‘project’.

The ability to catch a moment on your mobile phone and instantly upload to a photo-sharing site demonstrates the way mobile photography can be a very powerful tool in areas such as photojournalism. However, this ‘instantaneous’ culture can lead to the need to upload photos on a constant, and sometimes daily, basis meaning the storytelling of a narrative sequence of images is lost.

While there are many photography showcases built around a single image, this feature aims to showcase a story built around the photographer and their subject.

Like most photographers, I am framing shots in my head all the time. I want to frame everything. Everything is a photographic opportunity. The locations I was in were simply amazing for street photography.

Asia is frenetic, chaotic. The momentum and surge of humanity you feel on the streets is powerful. You are swept up and swept along with it. Amidst this, I found moments of quiet; times when people, on their own, are lost in their thoughts, among the millions in big cities. I feel the images allow us to imagine the stories of those in the shots.

This was the first time for me to see the potential of the iPhone as a camera. I found myself on the streets of Hong Kong, Hanoi, Seoul, Busan, Kyoto and Tokyo overwhelmed by the photographic possibilities. I was lugging the big DSLR with me, but I found the iPhone was perfect for shooting street. It was small, it was discreet and it could get in close and capture those instants so much better than the intrusive DSLR.

That trip introduced me to mobile photography. When I came back I began to post regularly on my other Flickr account, the one I set up just for iPhone shots. I also began to become involved in Flickr groups for mobile images and I began to learn from other mobile street photographers. The iPhone is the best camera for street work. It takes great images. It gets you in close and there are some wonderful apps out there to enhance the images. In saying that, I mostly use Instagram, and from time to time, Snapseed. 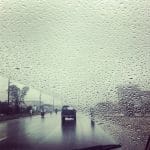