This week’s showcase of mobile photography features a selection of images from the Mobiography Flickr Group which look at the subject of reflection photography. All these photographs make good use of reflections to create interesting compositions from water, glass or on metal surfaces. From Marzia Bellini’s colourful photo from romantic Venice to Firery Broome’s Olloclip inspired macro shot of water droplets on a brightly coloured plant. I’m sure you’ll agree these images show that there is an interesting photo to be taken almost anywhere you are. You just need to look for it.

‘MoJoCon 2015 – Dublin – RTÉ – Walkabout Photography Session‘ by Micheal Mac Suibhne – “I am what some might call a dinosaur, I’m a cameraman/editor with a large camera and MacBook Pro 17. It works, it has for years and I can also go Live from the laptop if I have a nice past IP speed.

I am also a technophile. As a kid I used to rip stuff apart to try figure out how it works, at 46 I like to put stuff together and see if it will work!

As a Cameraman I took to mobile and filming with an iPhone from the moment my TV Station issued me with one but when it came to photography I still tended to go with my DSLR.

The ‘MoJoCon 2015 – Dublin – RTÉ – Walkabout Photography Session’ utterly changed my thinking about how I take photographs. Because my iPhone 5S is always in my pocket it has allowed me to take photographs where a DSLR would be impractical. In other words I can put my TV Camera down for 10 seconds, capture a photograph of very high quality and then get back to my day job. Our Online Desk loves receiving them as it ups our reach.

The photograph was taken on Misery Hill, the former location of the Dock-side gallows where many were executed. It is now a redeveloped part of Dublin with a Daniel Libeskind designed Theatre, a Five Star Hotel, beautifully designed offices and apartments.

Up is a direction people sometimes neglect to look for photographs. On the morning I took the photograph the weather was a mix of short rain showers and strong sunlight. The sky tried to go completely blue but clouds had to play a part. The Marker Hotel is on the left, the stage door side of the theatre on the right.

Having taken the initial photo’ I edited it in the native iPhone 5S filters. I found that the filter “Process” best punctuated the lines, reflections, colours and shades the best. The process took 30 seconds, I tweeted it and posted it on Flickr and moved on to the next image which would jump out in front of me!”

Fifteen years passed & it still feels like day one

‘Fifteen years passed & it still feels like day one‘ by Marzia Bellini – “This photo has been taken in Venice and the occasion was me and Marco Lamberto (marcolambertomobile on flickr) 15th anniversary. So instead of taking the usual photo of the two of us to celebrate the occasion, I decided to show two completely strangers. The reflection effect was obtained taking advantage of a puddle (which aren’t uncommon in Venice, even in a sunny day). I’ve edited it as usual with Photoshop – to generally enhance it and lower the noise – and then in VSCO cam, which is absolutely my favourite mobile editing app.”

Trees need to cheer the fuck up 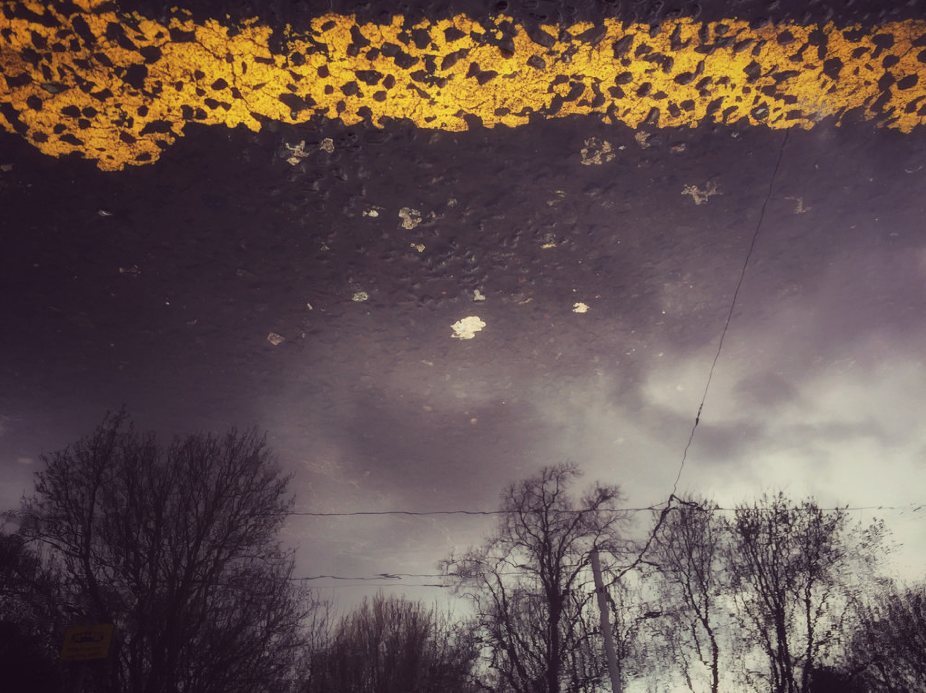 ‘Trees need to cheer the fuck up‘ by Brendan Ó Sé – “This was shot on iPhone 6 in Dublin. Reflections always get my attention, as do trees, and when the two combine it is great. The yellow street markings gave a nice border to the image and the little bit of oil that was in the water gives a nice fluid texture to the image.

Processing it, I used Snapseed to flip the image and I brought down the brightness and played a little with contrast, shadows and highlights. 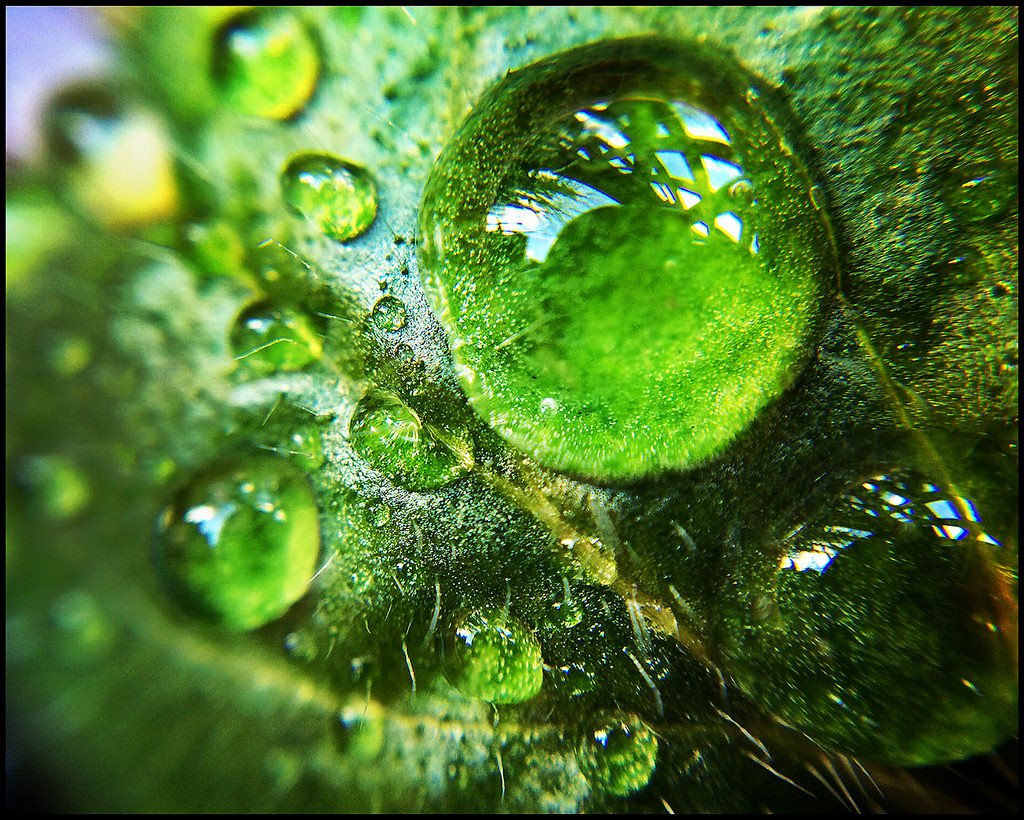 ‘Emerald Beads‘ by Firery Broome – “The image was captured in early January 2015 after a rain and ice storm. I used an iPhone 5s, the PureShot camera app and Olloclip Macro lens. Sorry, I can’t remember which one.

In this image a portion of the leaf was just above the frozen layers with a mix of un-thawed and lightly frozen drops of rainwater on them.
The blueish area in the top left corner is a bit of the ice.

The image was processed on an iPad 3 with the old version of Snapseed. I made some standard adjustments with brightness and contrast and some selective darkening in a few areas. Then I added a vintage texture layer and made adjustments to those settings. To finish it off I added some vignetting and a plain border.”

‘City hall‘ by Sina – “I was in downtown Toronto for an appointment at an office close by to Toronto City Hall, but I was there a bit early. I decided to walk around the City Hall and look around and kill some time and maybe do some photography. There is a fountain pool in front of the City Hall campus that is used as a skating rink in the winters. As I was looking at the reflection of the City Hall buildings in the pool when I noticed a pigeon drinking some water in the middle of the reflection. I took the shot with my iPhone 6 Plus and processed it using Snapseed.”

‘Solve for X‘ by Marco Lamberto – “I was walking during a lunch break when I entered this small arcade. I was aiming for a symmetrical shot and I’ve looked for a shop window for the purpose of a nice and (possibly) clean reflection. Then I just waited for someone walking and took few shots.

‘Little Shoes in Little Puddles‘ by Andy Butler – “Life has been pretty busy recently so I’ve not had many opportunities to get out and do some serious photography. On this occasion though I was playing with reflections while playing on the local park with my son. This shot was taken with ProCamera8 with an iPhone6 then imported into Snapseed.”

I Can Jump Puddles

‘I Can Jump Puddles‘ by Liz Traynor – “I took this photograph one Sunday afternoon a few weeks ago. We had gone for a ride on the beach and had stopped to have a look at the rock pools and a walk on the beach. My son was riding his bike around this big rock pool and I noticed his reflection in the water. I liked the way it looked so I asked him to keep riding around and doing a few wheelies so I could capture him and his reflection. I took heaps of photos but I think this one turned out the best. I took it in black and white with the iPhone 5s in-built camera app and processed it ever so slightly in Snapseed. ”