The theme of last week’s Mobiography Photo Challenge was ‘Blue’, a color that can evoke many emotions and feelings from the warmth of a vibrantly blue sea or sea to lighter tones which can be more calming and cool. The photos featured in this weeks showcase illustrate how different photographers have used the color blue to great effect.

This week the theme for the next photo challenge will be ‘Symmetry’. For this challenge think about sharing your best mobile symmetry inspired photos. Think about photos that use reflections, or compositions that create balance.

To enter the challenge simply start sharing your best images on the theme of ‘Symmetry’ that were taken and edited with a smartphone by using the hashtag #mobiography_challenge_46 on Instagram.

‘Going places‘ by @applewhite67 – “I captured this image about 10 years ago while on a flight back from El Paso where I was visiting my mom.  I was new at mobile photography.  I had no idea any of the images I took on that flight would be of any quality. While I think I understand the rules of composure, I find the big three difficult to master on the fly when using a mobile phone, but I guess that’s the fun and challenge of it all.”

‘B.l.u.e.‘ by @catchthemoment_nl – “I shot this hydrangea flower cause of its colour and beauty (and it’s my most favourite flower). I love to highlight the beauty of a flower in different angles. I shoot all my photos with my mobile phone a Samsung 9plus. I shot this one in the “pro mode” in which you can adjust the light perfectly. After that I edited it with Snapseed. “

‘On the Beach‘ by Charles Read – “Clear skies, the last bits of lingering light, and a long walk at dusk on an empty spit of sand that juts out into the Atlantic near my parents’ house in Rhode Island all added up to inspiration for a moody Hipstamatic edit using the Watts lens with StandUp film and RedEyeGel flash. I loved how this combo took everything even further in the blue direction than the natural conditions themselves already had. Camera at crab’s-eye level and low light conditions threw the foreground naturally out of focus. Shot on iPhone 6s and post-processed in Hipstamatic.” 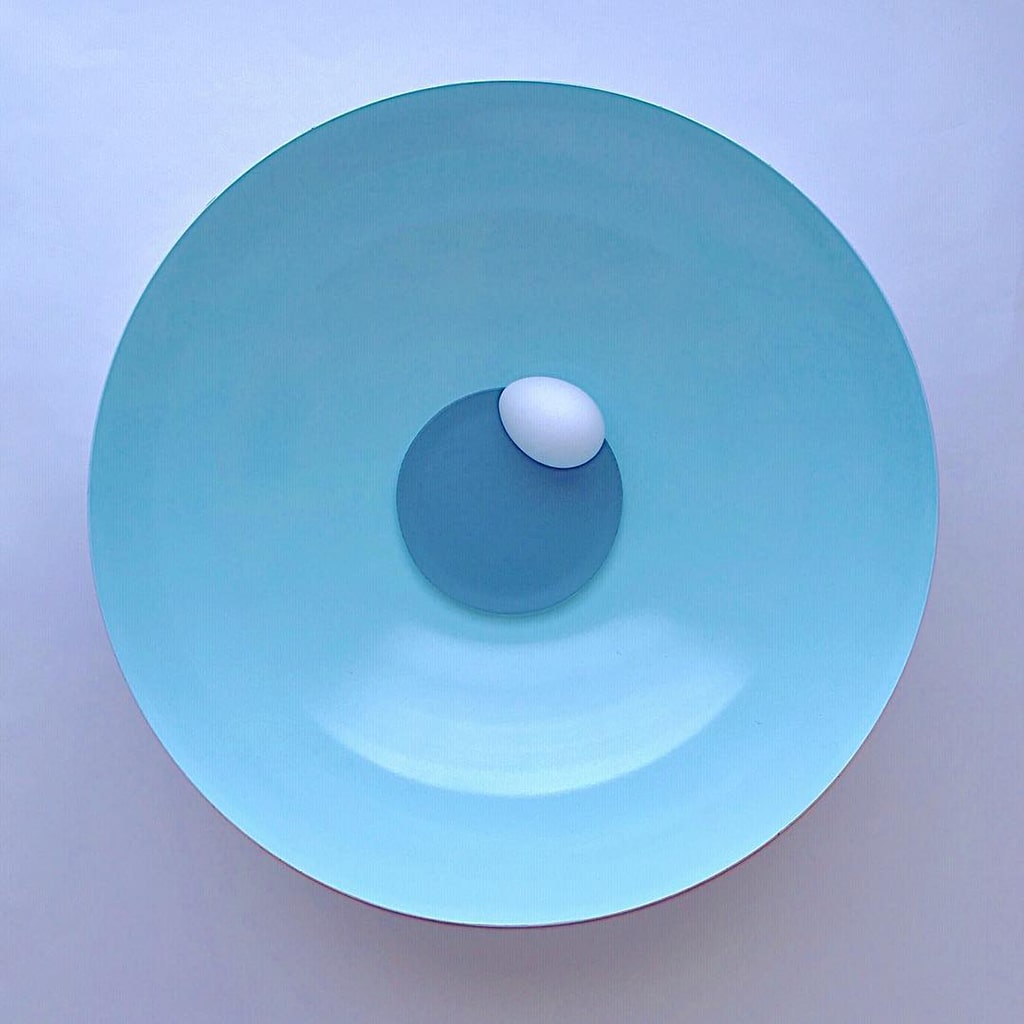 ‘Big Blue Krenit Bowl‘ by @goodcomma – “All my photographs are taken with my iPhone (currently an iPhone 6s), and almost all of them are taken on my kitchen table with beautiful California sunlight shining in from a north-facing window. In this picture, both the large light blue steel and enamel Danish bowl and the little dark blue French ceramic plate that I put inside the bowl were gifts from family members. I put them together on a white art-paper background on the table and when I put the white chicken egg in the center, it kept rolling to the side. I like to center objects in my images, but the egg just wouldn’t comply, so I went with the off-center egg. No photograph ever turns out the way I initially plan, but that seems to be part of the process. I’m always surprised how the light dances off the various surfaces and objects and changes during the seasons and time of day.”

‘Peek-a-boo‘ by John O’Donnell – “Every weekend as much as we can, my wife, our two gorgeous girls and I will get out for some much loved family time. I am usually snapping away as much as I can just trying to capture some candid moments.

On this occasion we were simply at local playground burning off some energy on a sunny morning. My youngest was playing on this equipment and was calling me through the hole. I actually wanted to get a picture of her smiling through the hole, just as I rose my iPhone she peeked through and I snapped the picture. Looking back through the pictures of that morning when we got home something just brought me back to this picture over and over again. It was her blue eyes between the blue of the playground equipment.

I shot this picture on my iPhone 7 Plus using the camera app Halide and slightly tweaked the contrast and brightness using Darkroom app. “

‘Untitled‘ by @lftygurl – “I enjoy taking pictures of every day items. This was a picture of my plumbago that is in my garden. My page consists solely of photos shot from my IPhone 6 and 7, using the ProCam app. Any editing is done using the SnapSeed app. Since my iPhone is with me 9 times out of 10; what better way to find the beauty in life….”

I say: hey, you with the red dress on… 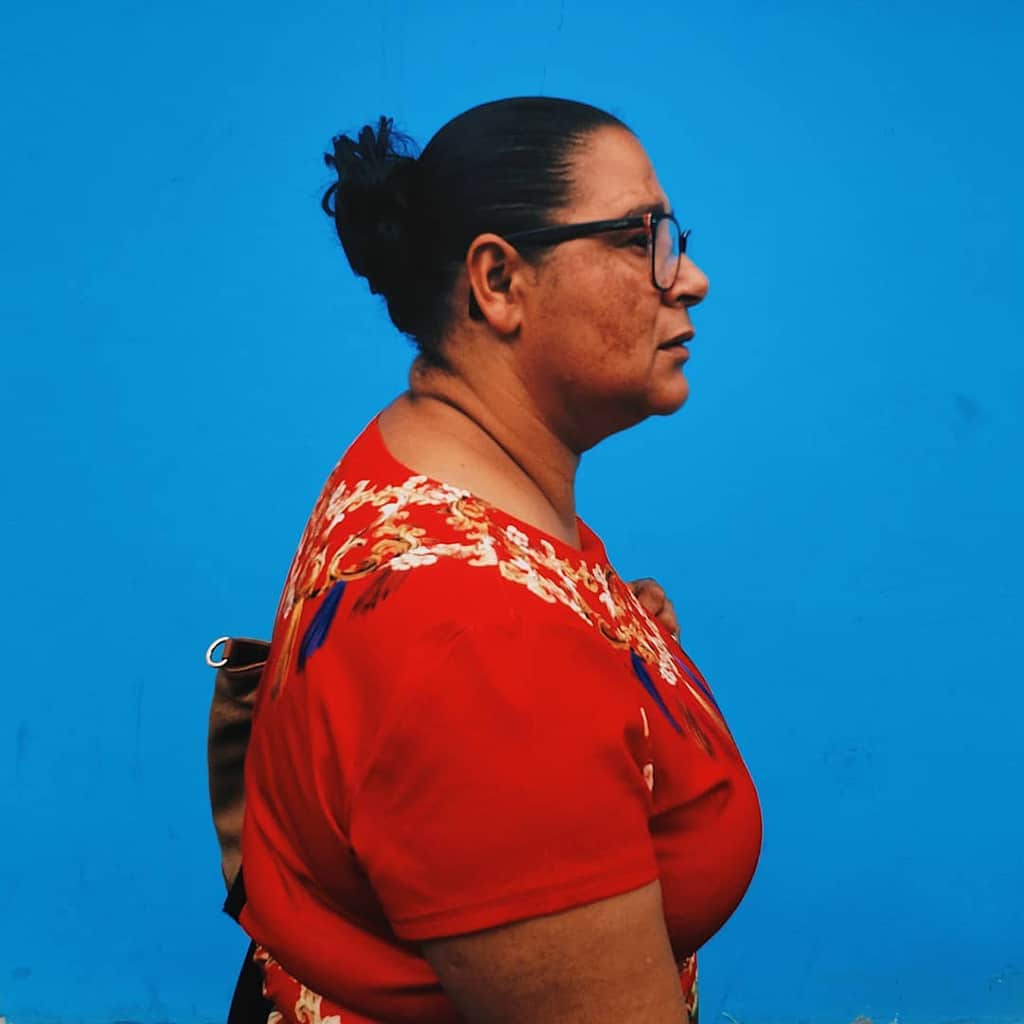 ‘I say: hey, you with the red dress on…‘ by Renato Baer – “This blue wall of a pharmacy has always caught my attention and it is part of my way from the subway to my house and again I have the opportunity to make a photography with a people with the wall in the background.I did the editing using the VSCO and Snapseed with the aim of bringing the contrast and structure of the colors.” 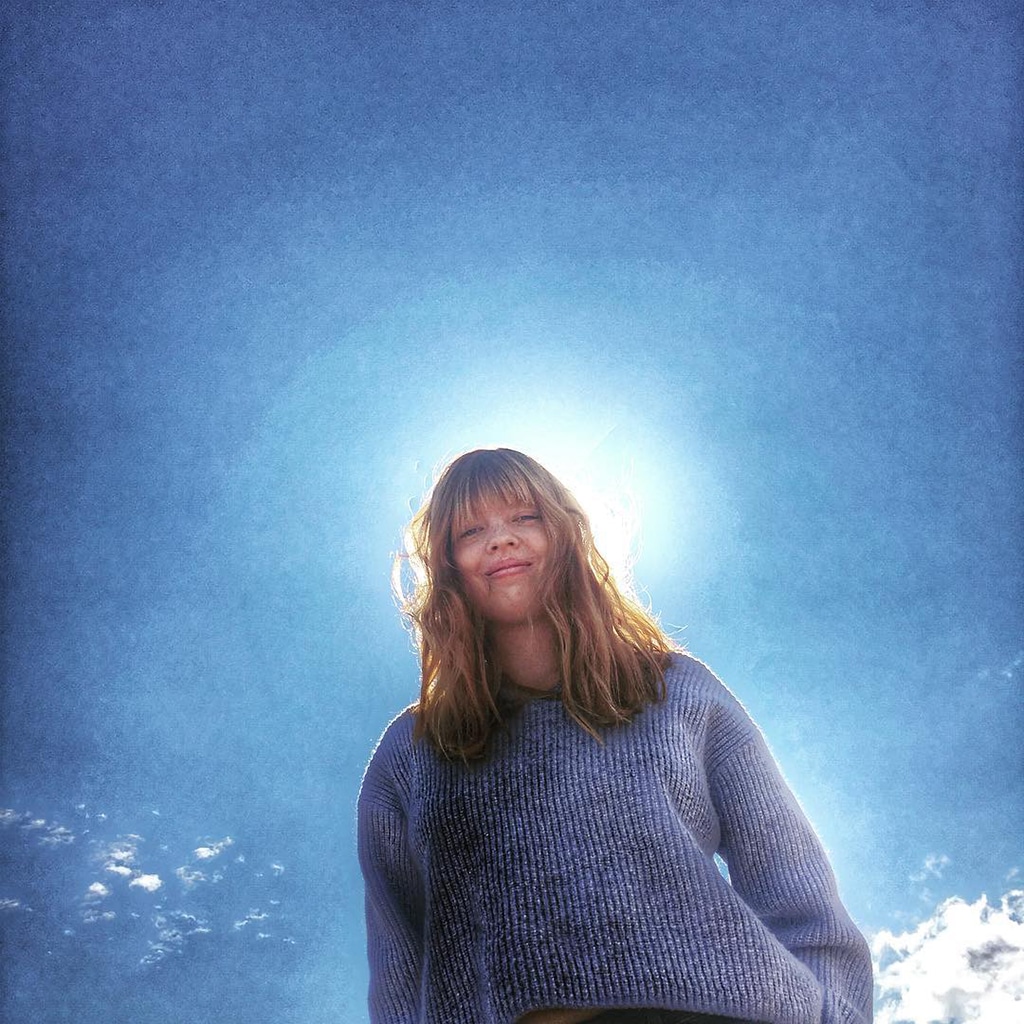 ‘Halo Josie‘ by Shirley Jones – “This image was taken on Tentsmuir Beach on the east coast of Scotland last September, as with all my work it was taken on my Iphone SE. It was a glorious day and our whole family were together walking on the beach. Josies jumper seemed to match the sky. I edited this in snapseed adding a little HDR. The colour was as it was on the day that gorgeous azure blue. Scotland has an unfair reputation as somewhere it never stops raining, so I wanted to show that amazing sky off to its best advantage. Scotland is in fact one of the most inspiring place to take photographs anywhere in the world!” 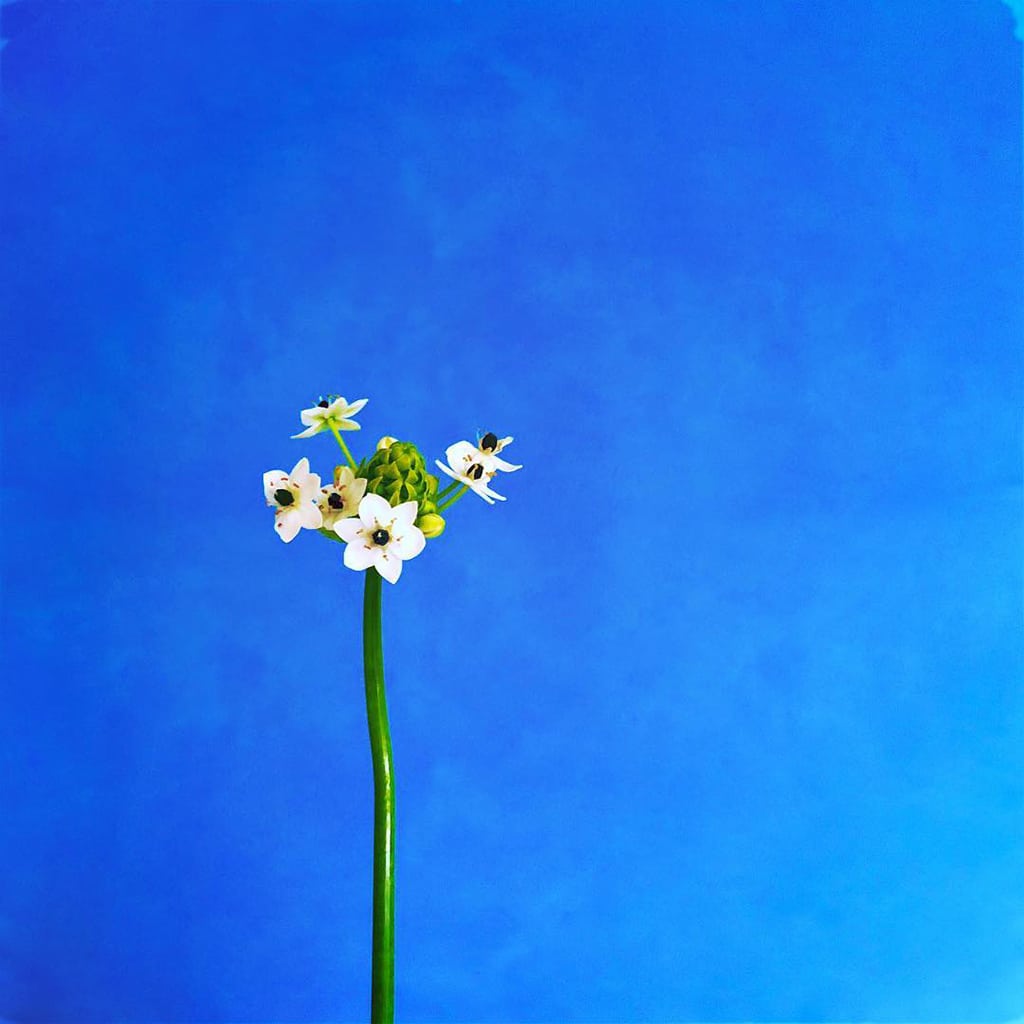 ‘Ornithogalums ~ Star of Bethlehem‘ by Elaine Taylor – “This is a flower called Ornithogalum – also known as  ‘Star of Bethlehem’. I love the cute quirky little white stars on this stem. As is usual for me, if I’m photographing flowers I like to place them against a plain colourful background so they can pop. This blue wall in my son’s bedroom has come in handy on many occasions.

This was shot with my iPhoneX through my beloved Hipstamatic app (Lincoln / Rasputin – no frame).”

‘JAWS‘ by @tonyferoo – “I like to see things from a different perspective. I enjoy discovering the world through an innovative and creative lens. Every day I wake up and observe the objects that surround me, and I think how to represent them in my reality, outside the everyday and its restrictions. One weekend at home, while watching the movie Tiburon, it occurred to me to represent this classic film with some common object.

The photograph consists of three images: the model, an iPad and an iron as well as a blue background painted with watercolors. I used the Photoshop app to composite the images.” 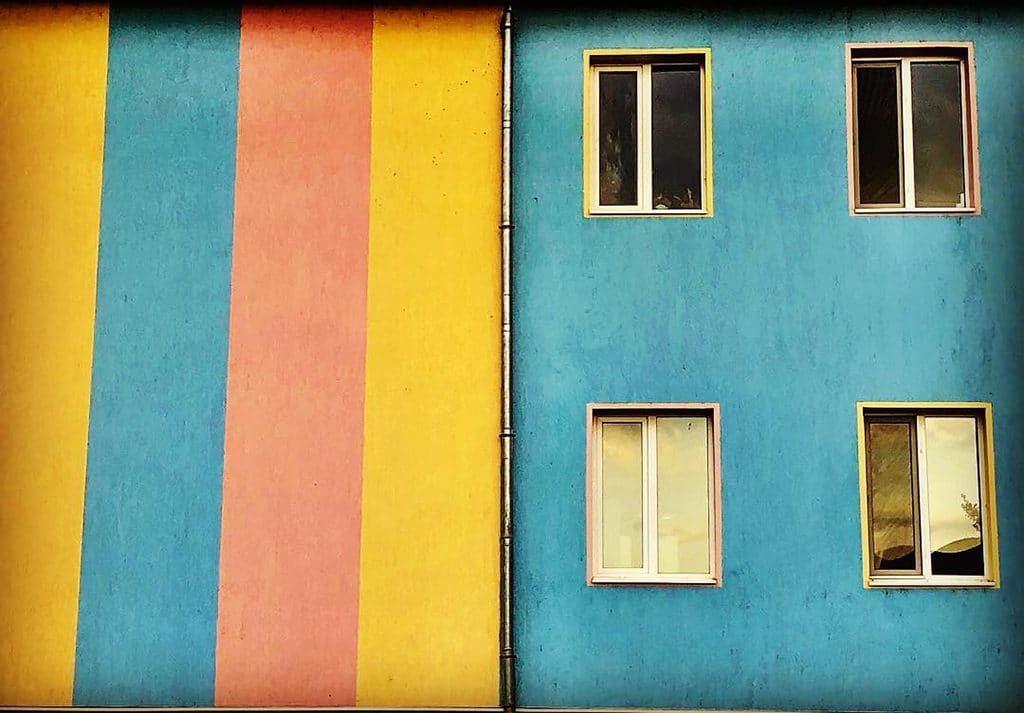 ‘The Nursery‘ by Clare Vattev – “I’ve been trying to get to grips with minimal photography which I really admire but have found very challenging – what is or isn’t minimal? On the lookout for geometric shapes with simple colours I came across this nursery in Bulgaria. I liked the way the drain pipe split the vertical coloured lines from the single colour with complimentary shapes, two for the price of one! I’m still not sure if this shot is minimal but I shall just keep exploring. Taken on iP8+ with Camera+, cropped and edited in Cam+2 (intensity 62%, vibrancy +9, Fashion filter.)” 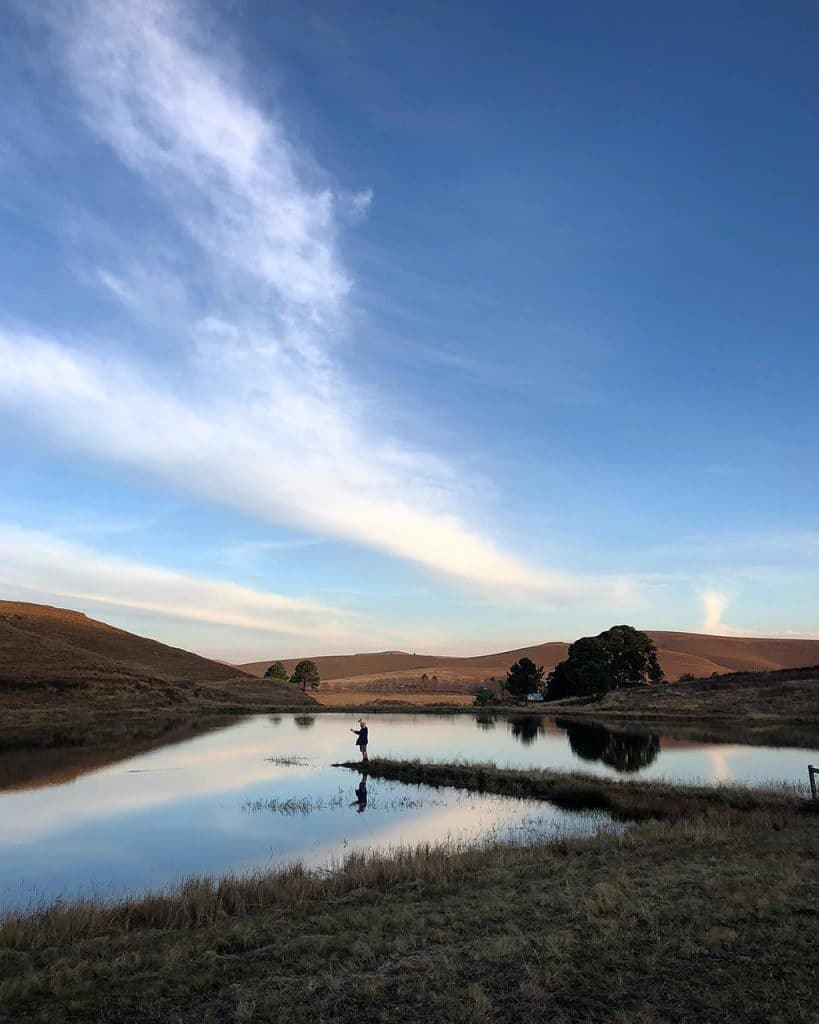 ‘Fishing‘ by Ann Hecht – “We like to go on road trips and this time we went to the Drakensberg in Kwazulu Natal. Very beautiful and famous for trout fishing. This is a trout dam just before sunset in the blue hour. There was no wind and gorgeous reflections. I walked back up the hill and this is the result. Tiny fisherman under the blue sky reflected in the the blue water. I
passed it through Snapseed app for some minor adjustments. No filters used.” 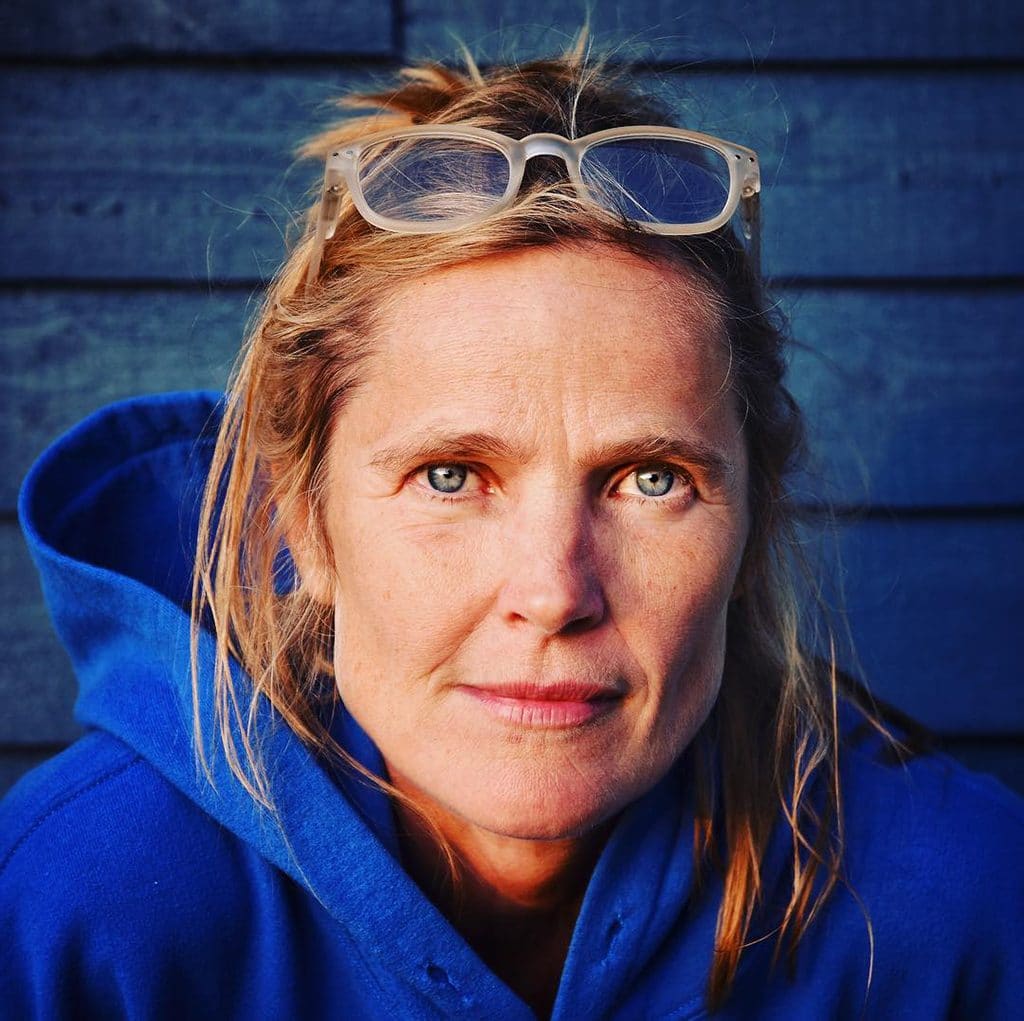 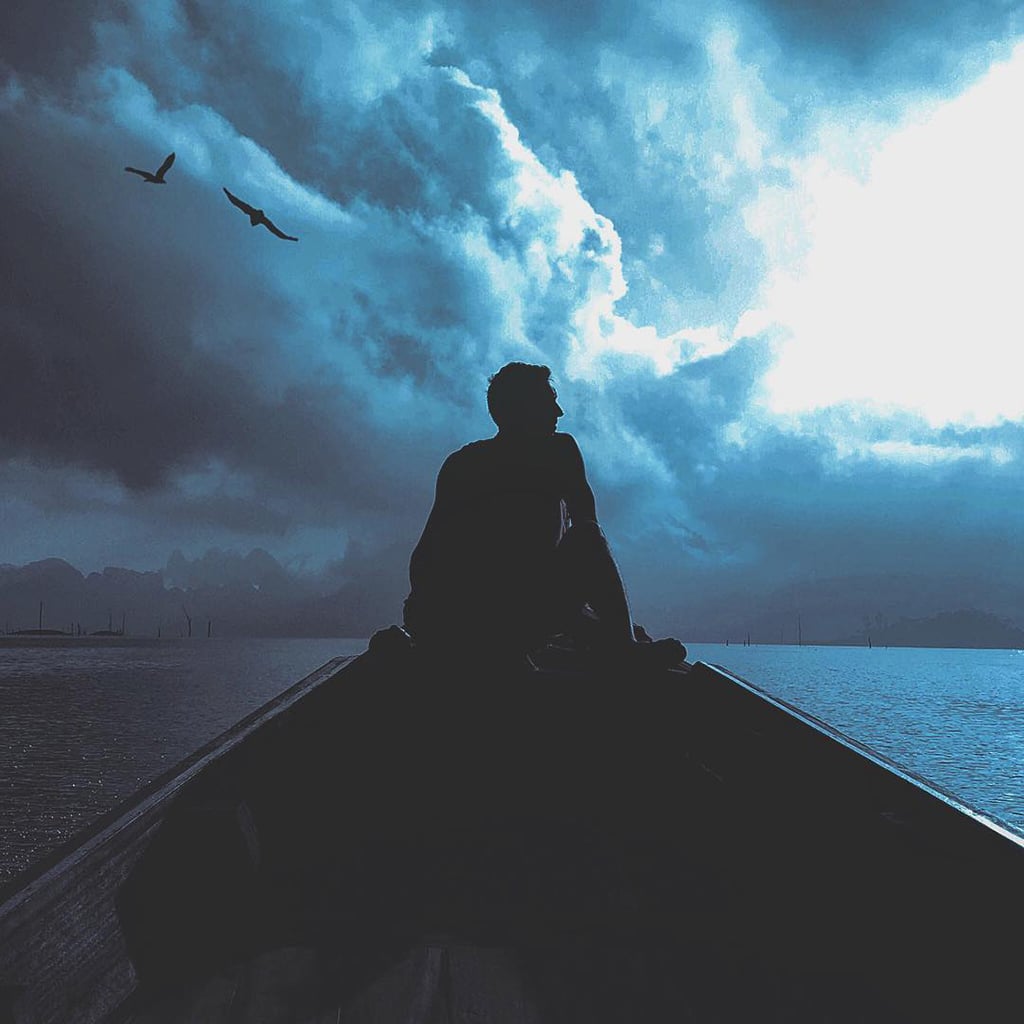 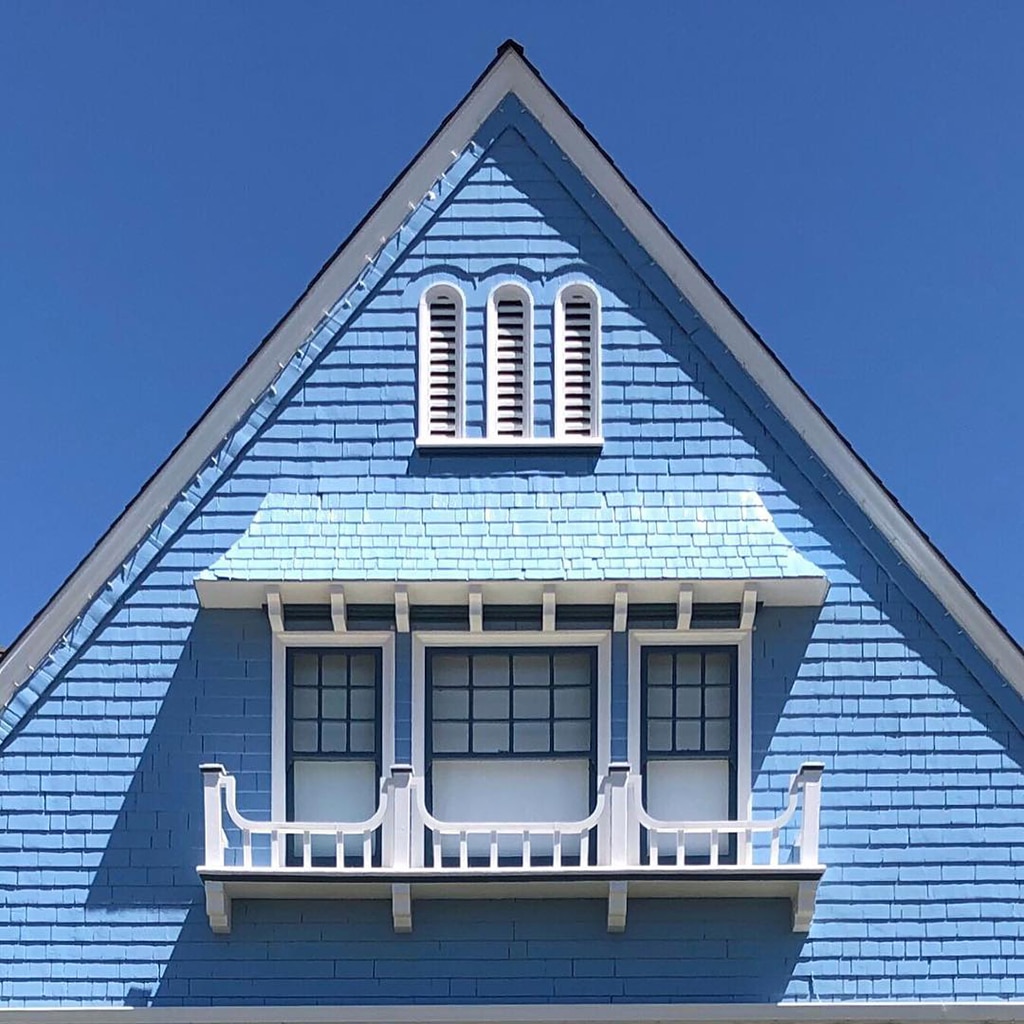 ‘Untitled‘ by Renee Clark – “This is a true “I pulled over for this” moment. I was racing to a meeting and drove by this house. I pulled over and snapped a shot or two then came back to find it again after the meeting. This sky had gotten even bluer by that time and I had a couple more minutes to line up my shot. Other than a bit of cropping and straightening, and the removal of a powerline, I didn’t need to make any other edits.” 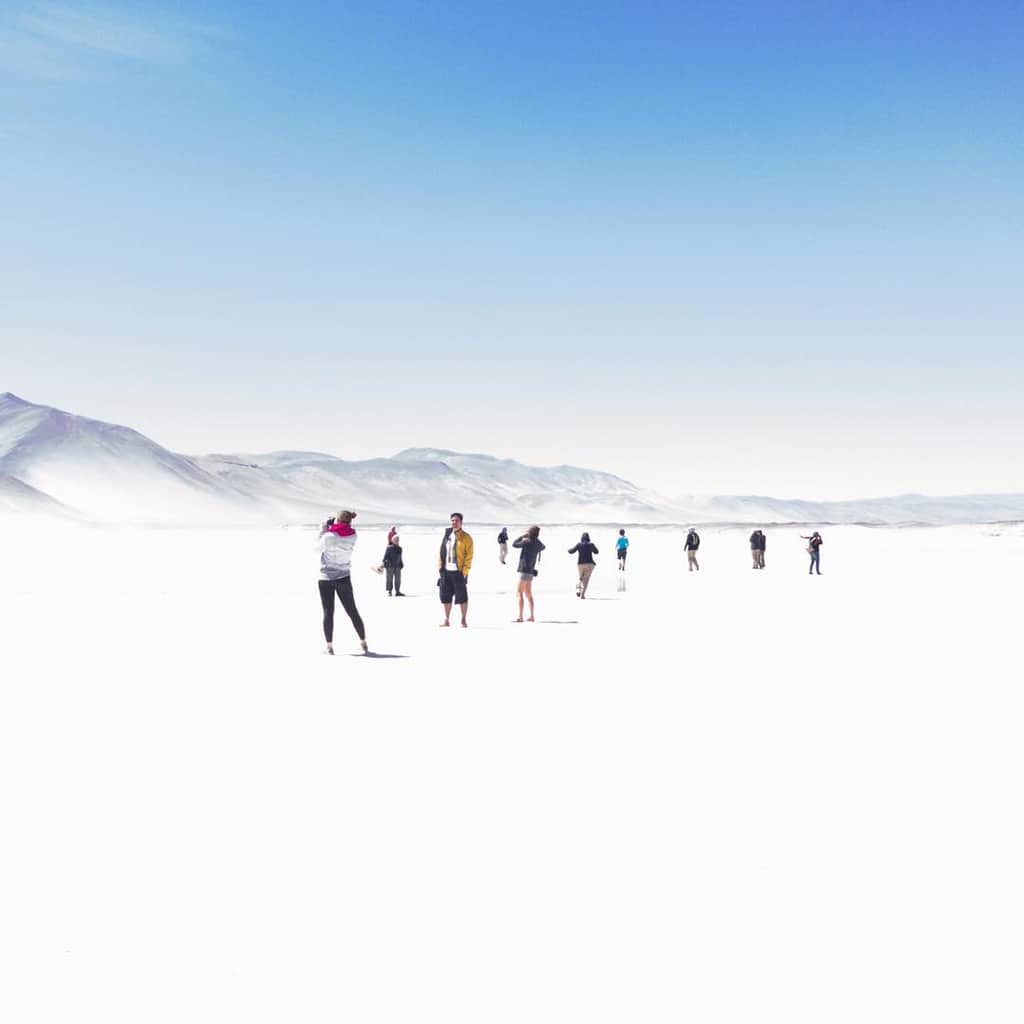 Flowers In The Wind 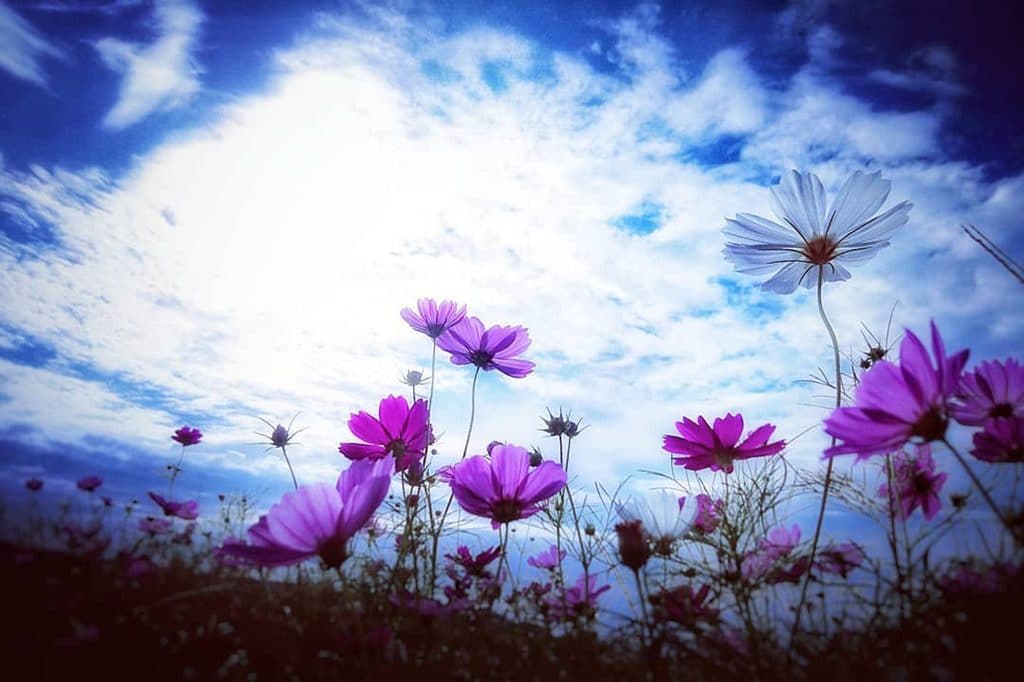 ‘Flowers In The Wind‘ by @mariyon_enoki – “I took it with Xperia SO – 03H. Everything is edited on a smartphone using Instagram and Snapseed.”

This week the theme for the next photo challenge will be ‘Symmetry’. For this challenge think about sharing your best mobile symmetry inspired photos. Think about photos that use reflections, or compositions that create balance.

To enter the challenge simply start sharing your best images on the theme of ‘Symmetry’ that were taken and edited with a smartphone by using the hashtag #mobiography_challenge_46 on Instagram.