The theme for the last Mobiography smartphone photo challenge was ‘Shadows & Silhouette’s’ and what an amazing response. There were so many fantastic images submitted to this challenge. For the challenge you were asked to think about images that show off the shapes and patterns created by shadows and the abstract compositions that can be created using shadows or the moodiness and atmosphere between harsh sunlight and shadows. Here is a selection of some of the photos submitted to the challenge.

To enter the challenge simply start sharing your best images on the theme of ‘Beautiful Landscapes’ that were taken and edited with a smartphone by using the hashtag #mobiography_challenge_155 on Instagram.

‘Untitled‘ by @_g.vale – “There are few gifts more wonderful than a beautiful sunny day after a few days of grey skies and pouring rain. This was shot on iPhone and edited in Snapseed.”

‘Untitled‘ by @joanampereira_photography – “I love my country, Portugal has some amazing places to visit and explore. This photo was taken when my boyfriend and I returned home after a day spent in Serra do Gerês. We were on the road and saw a sign indicating a sanctuary and decided to turn down it. In addition to the religious building, it had these huge stones, as if it were a natural viewpoint. This coupled with the fact that I like to photograph people in a natural way, without them realizing, was an ideal combination and the perfect moment.

The place, the light, the environment and the silhouette of the person make this photo. When editing, I just put a filter, in a very small percentage, that relates to the aesthetics of my photos.”

‘Centre of attraction‘ by @_lupo_solitario_ – “As a photographer, I try to freeze time in moments that I capture through the lens of my mobile camera. This photograph depicts my vision of the calm amidst the storm. Life comprises of many situations where we have to traverse the storms that come our way and we have to do this while maintaining our calm and composure. The picture showcases the transition between the dimensions of “Light” and “Shadow” and how they are interrelated. I took the photograph at Yamuna Ghat in Delhi where seagulls come to feed and inhabitants earn their living by offering boat rides. I hope the viewers could relate to the theme of Shadows and Silhouettes and how it gives rise to these dimensions that we dwell in.”

‘First climb the dune‘ by @alice1280 – “This is the first sand dune that we come to in the morning . Sometimes we climb it and on this morning the sun was still low in the sky. The dune was perfect so I lingered at the bottom to try and get exactly this shot. The footprints leading the eye to the top and the silhouette. The clouds were a bonus. As usual Snapseed was my go to for editing in Black and White. I should try it in colour.”

I have grown to love secrecy

‘I have grown to love secrecy‘ by @aniraz95 – “This photograph was taken during the Movement Control Order in Kuala Lumpur in January 2021. Dining at a restaurant was still allowed subject to a maximum of two persons per table. My sister and I had breakfast at a restaurant which we had almost all to ourselves. There was this particular table by the window having a great view and light and was occupied by a mother and daughter. As soon as they left, my sister posed for me at the now empty table by the window. Fortunately, the restaurant operator did not mind! I used iPhone 12 Pro Max and made slight edits to enhance the mood using Snapseed App.” 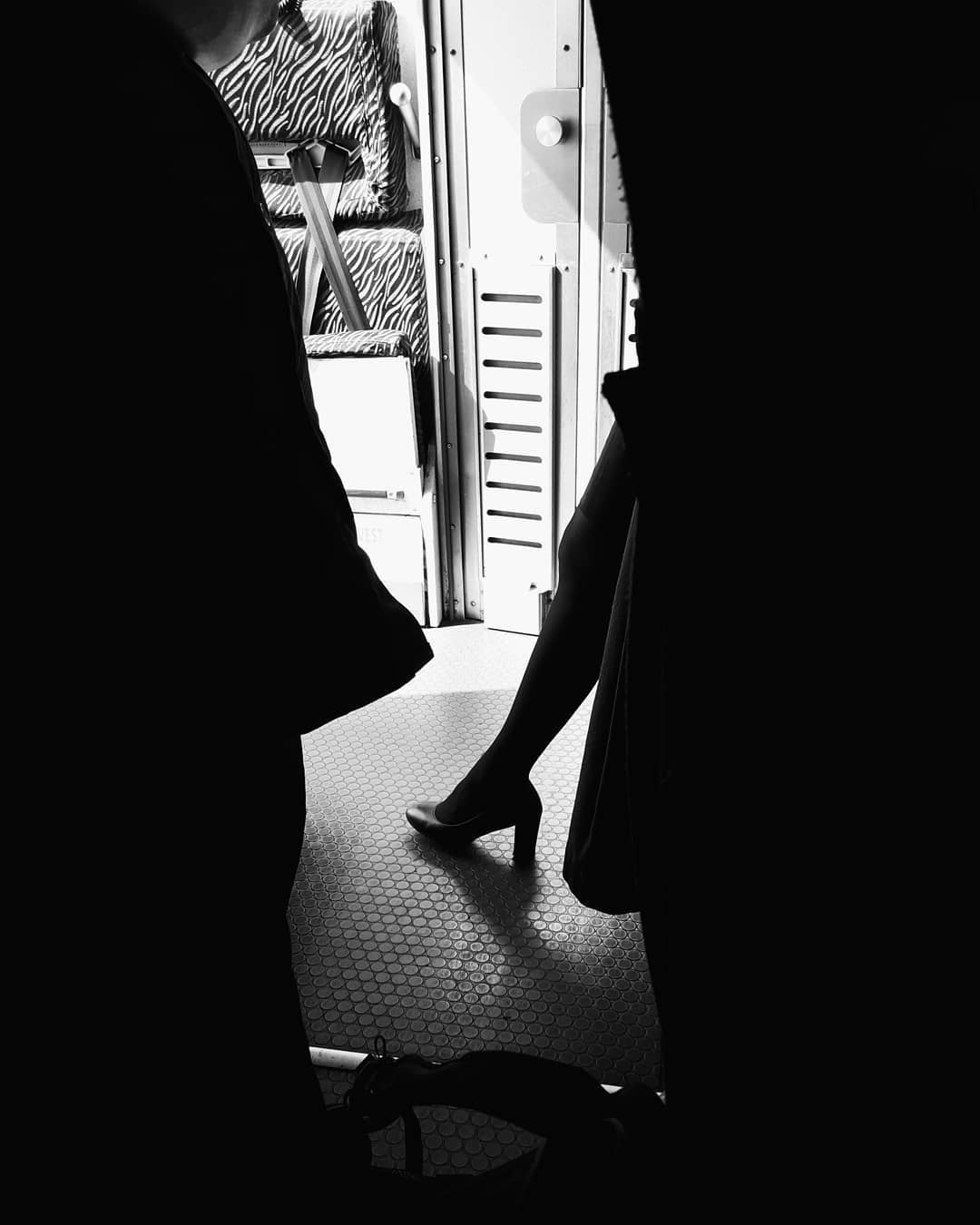 ‘Untitled‘ by @danielwencel – “The photo shows a flight attendant waiting for the passengers to get off the plane. It was taken with Samsung Galaxy xcover 4, edited in VSCO.”

‘on line‘ by @jawdoc2 – “Walking into the hotel at the Vancouver Convention Centre, I noticed the fabulous floor to ceiling windows displaying the ‘sails’ outside. There was a black glass table in the foyer which provided the perfect reflection of the window and the silhouettes in the foreground. I placed my iPhone XS Max on the glass table and took a few shots. I loved the symmetry and the leading lines of the ‘sails’ to the person on line.”

‘Puzzle in Black & White‘ by @jazzc.jc – “The idea of photography was to play with the puzzle idea. The engraving of the glass serves to understand the puzzle of what we are as people and what makes us as beings.

The edition (in Snapseed) enhances the play of light and the contrast of whites (especially careful) with black. It was important to have a clear shot of the glass (I took several photos with my Samsung G20 Ultra) to be able to give importance to the textures of the glass and in this way to be able to carry out an editing without excesses and care.” 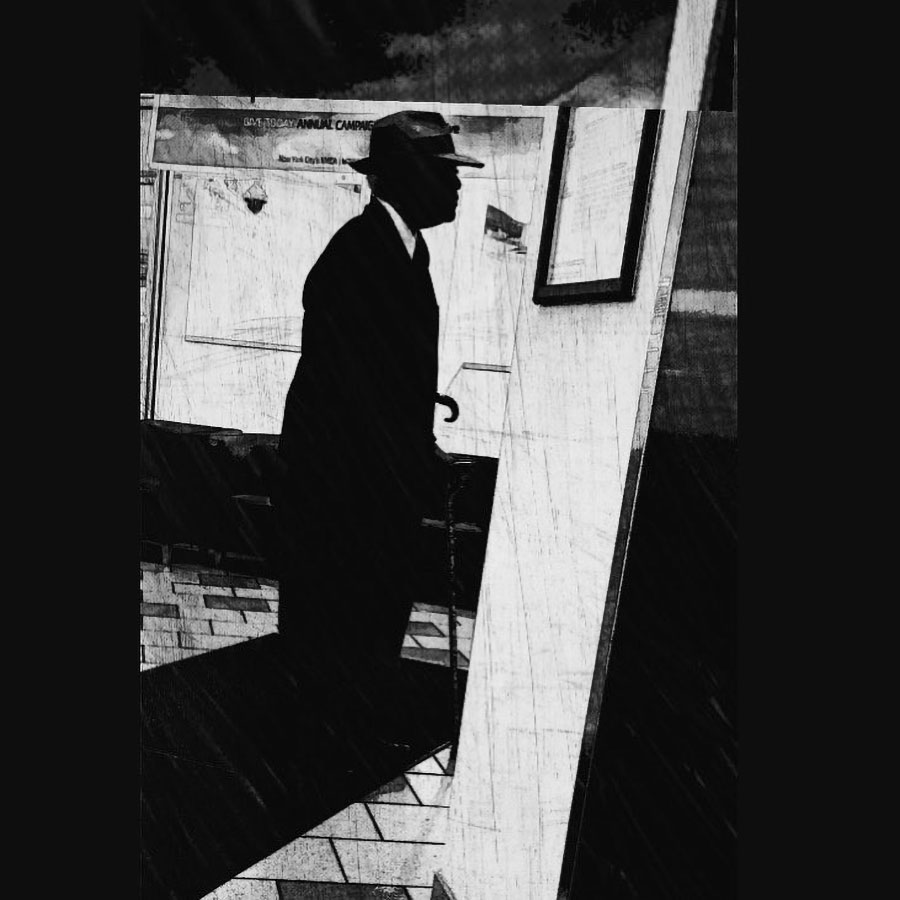 ‘NYC – 14th Street‘ by @juliacnyc – “The photo is of an elderly gentleman who is a familiar figure in Greenwich Village/NYC. A throwback to another era, he cuts a dapper figure on village streets, always dressed in suit, tie and fedora hat. ”

It’s all about perspective

‘It’s all about perspective‘ by @luiggi1905bn – “It’s a photo shot under the glass stairs of the Apple Store in Valencia, Spain.”

Magic is all around you, just open your eyes..

‘Magic is all around you, just open your eyes..‘ by @maarten_lisboa – “This was taken in February 2020, the ocean fog came into the river and when I saw this when I woke up so I quickly jumped in my car to get to the 25th of April bridge in Lisbon.

I have seen a few shots when this happened but never seen it myself. Some guys were taking pictures and I was lucky to capture one while he was getting into position. No idea who they were, I just captured the moment. The shot was taken with my Oneplus 6T at that time, I always shoot RAW in pro mode. Afterwards I can work with the file in Snapseed. ”

‘101 silhouettes‘ by @rachelli2 – “This image was taken of the remembrance tribute on the hill above the M40 at Aston Rowant. Although when seen from above the silhouettes looked over the busy traffic, from further down the hill the effect was very different and gave a quieter, more sombre feel. Being November the sky was full of rain and I wanted to use this to add atmosphere using it as a dominant feature in the rule of thirds. The edit was simple here – I used my iPhone photo editor to switch to black and white and increased the contrast before adding to Instagram. My hope is that this image evokes the emotions we feel honouring the lives of those humans who moved forward in the darkest of times. ”

‘Eddy‘ by @roblayton – “I use my iPhone every morning in the surf at Burleigh Heads on the Gold Coast, Australia, taking photos of our local surf community. This is Eddie, one of the nicest guys in the water and by far the most distinctive ‘fro in the line-up. As we are on the east coast, I shoot into the sun a lot, so I take a lot of silhouettes of the surfers. Positioning myself so Eddie is between me and the sun, his hair becomes magnificently backlit. This pic was three years ago, you should see his ‘fro now!”

‘The watchers‘ by @roypanphoto – “The photo was taken during one of my trips in 2020. It was a very sunny day and I was at the feet of a small hill. When I looked up against the sun, I saw people on the top of the hill with various poses, which reminded me of the watchers on the wall in Game of Thrones. I took a photo and named the photo as ‘The Watchers'”

‘Enigma‘ by @shabsmia – “To create the silhouette and bring intrigue and mystery to the image, I shot the subject behind the glass with natural backlight. Shot on iPhone, edited on Instagram only using the Inkwell filter and adjusting contrast, shadows and highlights. ”

A light at the end of the tunnel

‘A light at the end of the tunnel‘ by @mynotegallery

We are what we do

‘We are what we do‘ by @ihave_seen_things

To enter the challenge simply start sharing your best images on the theme of ‘Beautiful Landscapes’ that were taken and edited with a smartphone by using the hashtag #mobiography_challenge_155 on Instagram.