The theme of last week’s Mobiography Photo Challenge was ‘Autumn’, which was inspired by the current changing colours of the trees and surrounding landscape. The photos featured this week illustrate how different photographers have approached the subject. Leaves and the colours of yellows and browns feature prominently in this showcase. While some chose to capture the colours of the landscape, others decided to get close up to their subjects and capture the fine detail of the leaves.

The theme of this week’s photo challenge is ‘Framing’. For this challenge think about sharing your best mobile photos that capture interesting framing. Think about silhoutte’s in doors and windows, the arch of a tree, or the line of a dark shadow.

To enter the challenge simply start sharing your best images on the theme of ‘Framing’ that were taken and edited with a smartphone by using the hashtag #mobiography_challenge_139 on Instagram.

‘Untitled‘ by @paule_novemb – “Autumn leaves are one of my very favorites photo topics. I gather a few each day and then search for nice backgrounds to showcase them. I love when I can get into this nearby schoolyard and use its blue ground, perfect opposite colour to autumn tones.

I usually do only basic edition with iPhone Photo app, but this time, I wanted something different to distinguish from another leaf taken at the same place and posted lately. So I also used Snapseed to deepen the leaf’s hue and Instagram filter to add a light effect.” 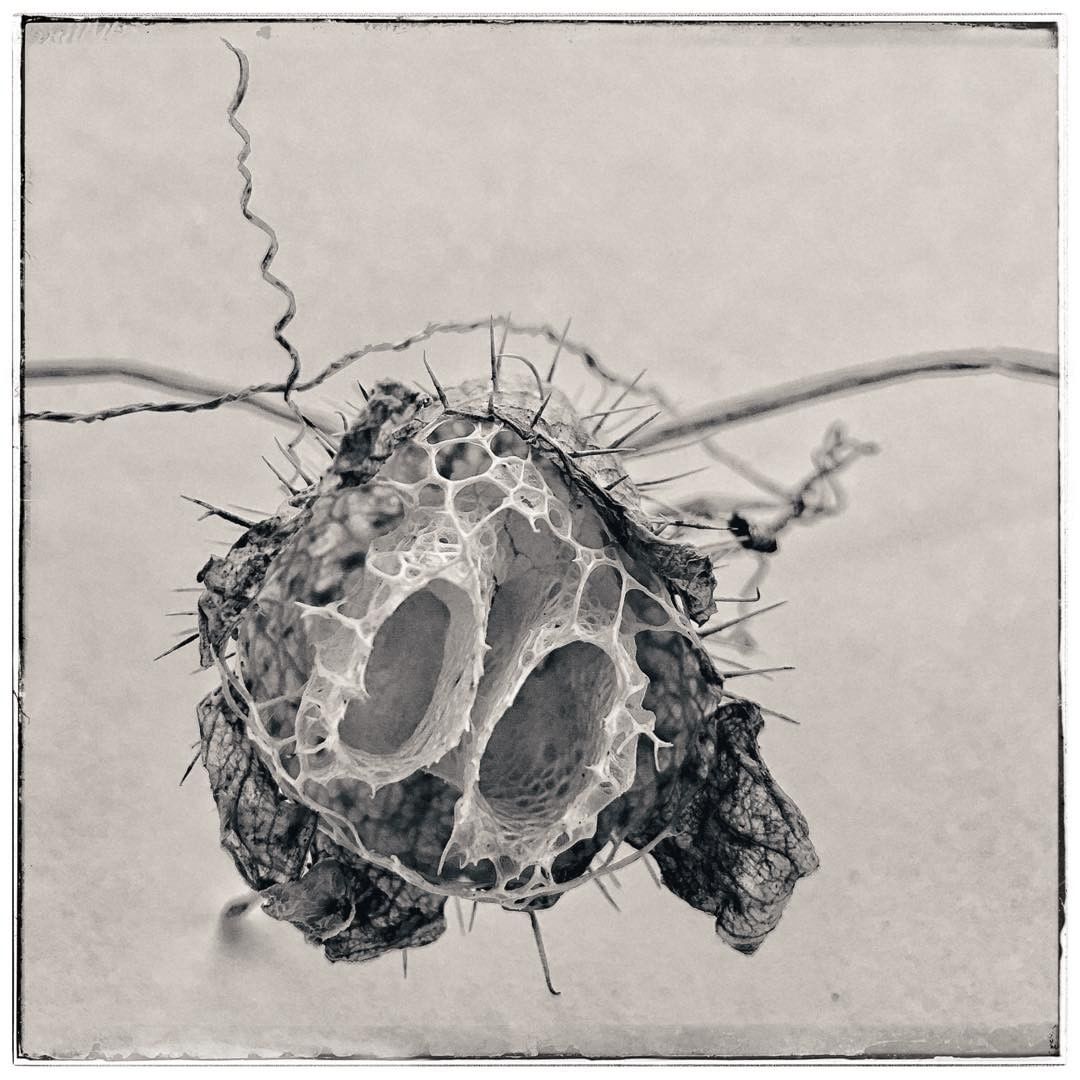 ‘Untitled‘ by @lucdigital – “As a fan of 19th century scientific illustration, “natural history” subjects have become a favorite of mine. Since I made the move to smartphone photography, I’m constantly amazed by the level of detail I can capture with a handheld device. This photo was taken when I was in rural New York State, and the subject is formally called ‘Echinocystis lobata’, more commonly known as ‘Wild Cucumber’. By late autumn, the green, egg-sized pods have turned brown, and when they dry out they open up and release two seeds from the chambers you can see in the photo. I gathered several of these pods on a walk in the woods and took photos with them arranged on a piece of white printer paper in front of a window, using only natural light. This photo was then edited in Snapseed, making use of its Noir filter. ”

‘Monochromatic photosynthesis‘ by @lupo_solitario_ – “The life cycle of a leaf is very interesting, from its inception as a shoot to it falling off a tree in Autumn. It’s truly blissful to observe a leaf up close, more so to click it with a camera when it has reached the pinnacle of its life span.

The Autumn leaf seen in the picture depicts the beauty nature projects, even when it’s seen through a monochromatic lens. I love monochrome and thus, the black and white edit. Autumn is an awesome season with plethora of scenic sights. When I saw this leaf on the ground, I knew I had to click it. I hope you could relate to the picture as it aims to symbolise the spirit of Autumn.”

Fantasy Dream of the Ranch 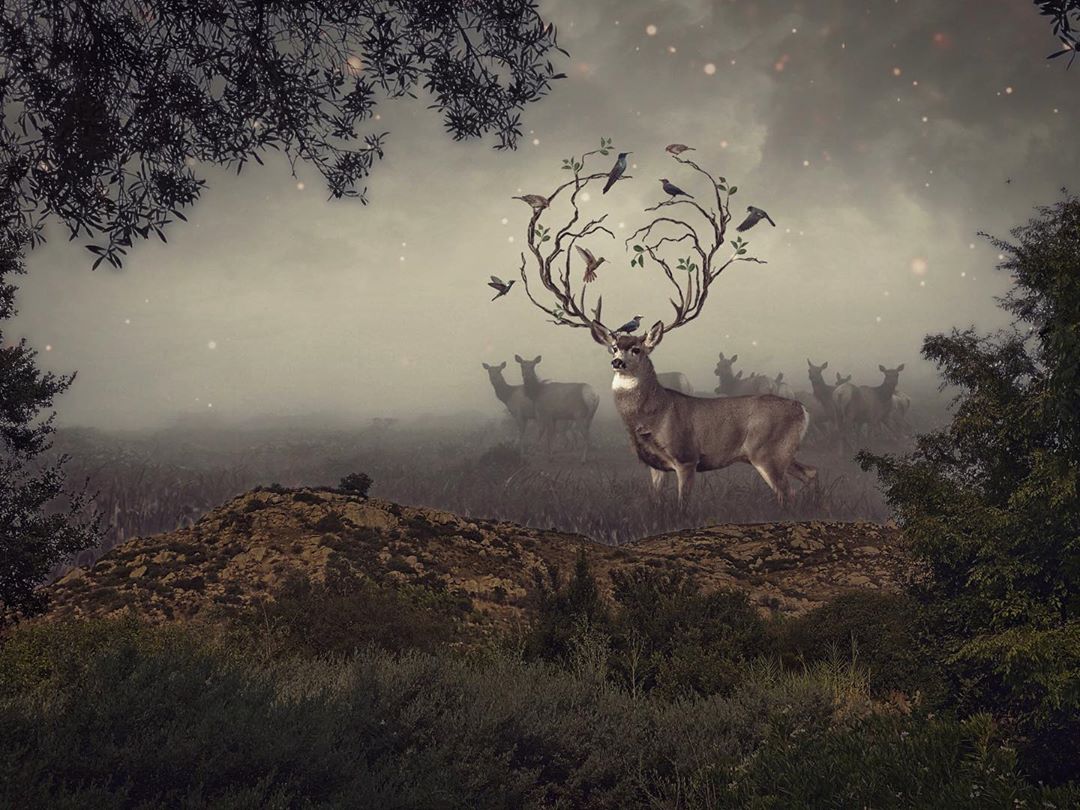 ‘Fantasy Dream of the Ranch‘ by @yonimayeri – “The original photograph was taken while I was presenting on iPhoneography at Rancho La Puerta in Tecate, Mexico, in September when they reopened. (I will be back there in November doing the same; I love presenting at that magical place!). I was on a hike in the evening and captured the image of the still landscape. It was edited in several apps, starting with the iPhone photo editor, then Photoshop Camera where the buck layer was added in one of the “lenses” , and finally touched up in Snapseed. I have had a lifelong fondness of deer (long story), their beauty fascinates me. Many live in my neighborhood, but I rarely see the huge bucks, they are very elusive compared to the doe and fawns. ” 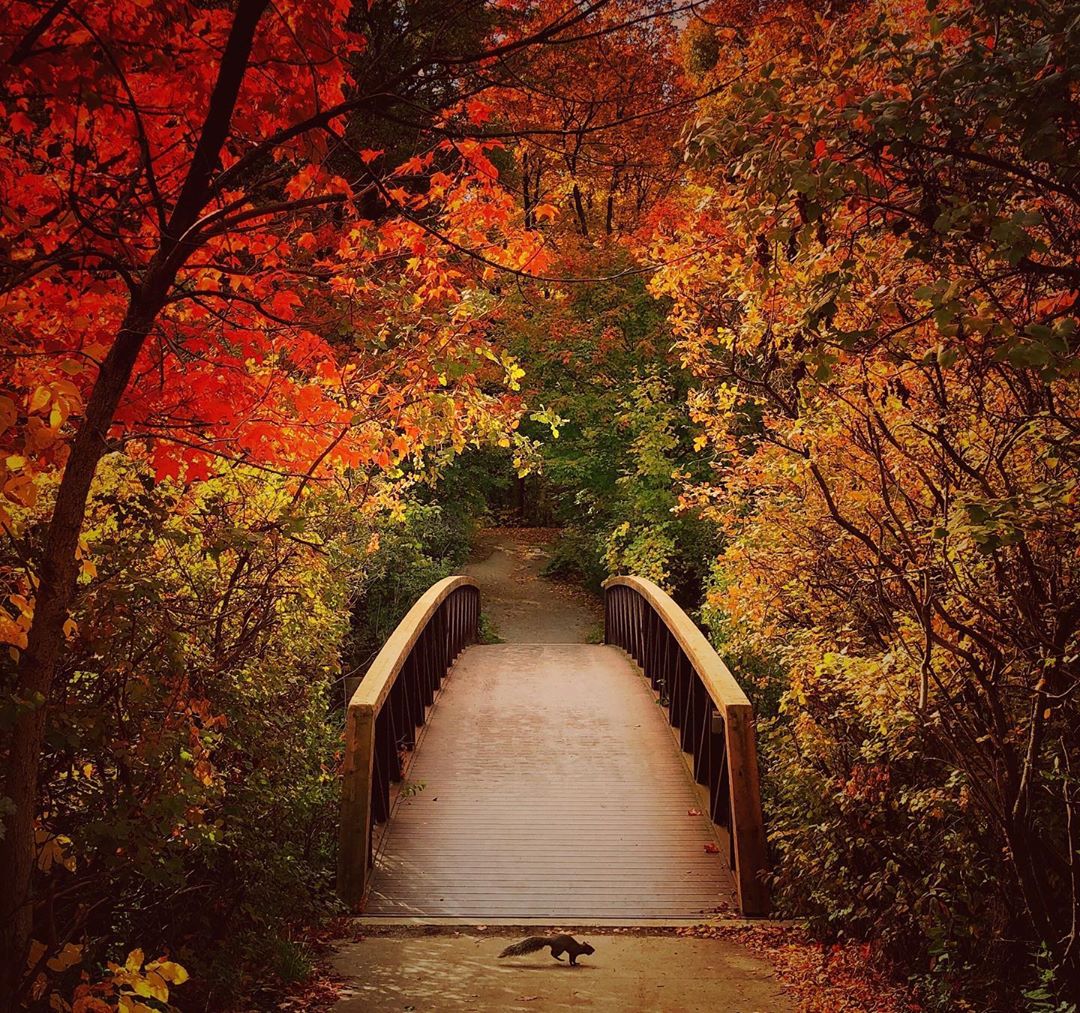 ‘Serendipity!‘ by @_enlivenus – “In trying to navigate through this very challenging time, I realized that I needed to experience life outside of my comfort zone, to search for and document the everyday things that I see in a more positive light. Fall always signified the oncoming of winter; cold, dreary, dark. But this year, I am looking at fall through a different lens. I often pass this bridge on the neighbourhood trails and this particular morning, I was struck by the light, the colours, the smell, and was compelled to stop. I had everything lined up the way I wanted and what luck! I caught the squirrel mid-leap. Serendipitous!

All of my images are shot on an iPhone X. This photo was highlighted in post using Mextures. ”

‘Rambutan‘ by @clicks_by_nidhiya – “Well it was for the first time in my life, that I had seen the different stages of a fruit, right from the flower blooming, developing to the green cover and evolving to this beautiful red beauty.

I was waiting for the fruits to be bright red, as it was said that more the colour, it would taste more sweet. And finally on seeing these beautiful red bunch, I was overexcited and even-though I was waiting to taste it, I wanted to freeze this special moment. So quickly took a snap and made it more appealing by editing in PicsArt and Lightroom in my smartphone. ”

‘Untitled‘ by @aishashebbo – “Autumn is my favorite season. It’s the color of the leaves in this season that always inspire me and gives me the motivation to take its pictures. So I had this idea to keep some of these fall leaves in books as a memory. And since books come from trees, I wanted to clarify through this picture that books and leaves are from the same source, which is nature.

This image is one of my favorites, it was taken by Huawei smartphone and I used Snapseed and 1998 Cam as editing apps.”

Colors of the day

‘Colors of the day‘ by @di.monheit19 – “Autumn is my favorite season! The colors are magnificent! While on a photo journey in the Eastern Sierras, I came upon this lake with these gorgeous reflections. It took my breath away. Using my iphone10 and a few minor edits in Snapseed, I captured this image.”

Another poppy from the garden

‘Another poppy from the garden‘ by @withflowersinherphone – “I take most of my floral images indoors on my coffee table, which is located next to a large, north facing window.

I love growing my own flowers and this was the first time I grew an orange coloured poppy, so I wanted to photograph it differently to my usual images. Instead of placing the flower on top of the coffee table, I put it inside the drawer underneath. Although this reduced the amount of light on my subject, the colour of the timber surrounding the flower added to the intensity of the orange, making it feel more like an Autumn image, even though it is Spring here in Australia. So I decided to process the image in Mextures, keeping with a dark and moody Autumn theme for all my friends in the northern hemisphere. The photo was taken using an iPhone 11 pro.”

‘Autumn, Singapore‘ by @chanarik – “This photo was shot during a recent outing with my students at Fort Canning in Singapore. As you may know, Singapore is a tropical country and we don’t have autumn here.

What attracted me to this was the colour and the lines on the leaf. As I was composing my shot, I noticed the cracked paintwork of the road arrow markings. I then used the cracked road markings as part of my shot as they look like veins or lifelines to me. Very similar to the leaf.

As it was shot with my XiaoMI 9, I then used Snapseed, my go to app for image editing. I increased the Saturation and Structure in Details before cropping it into a square format. ” 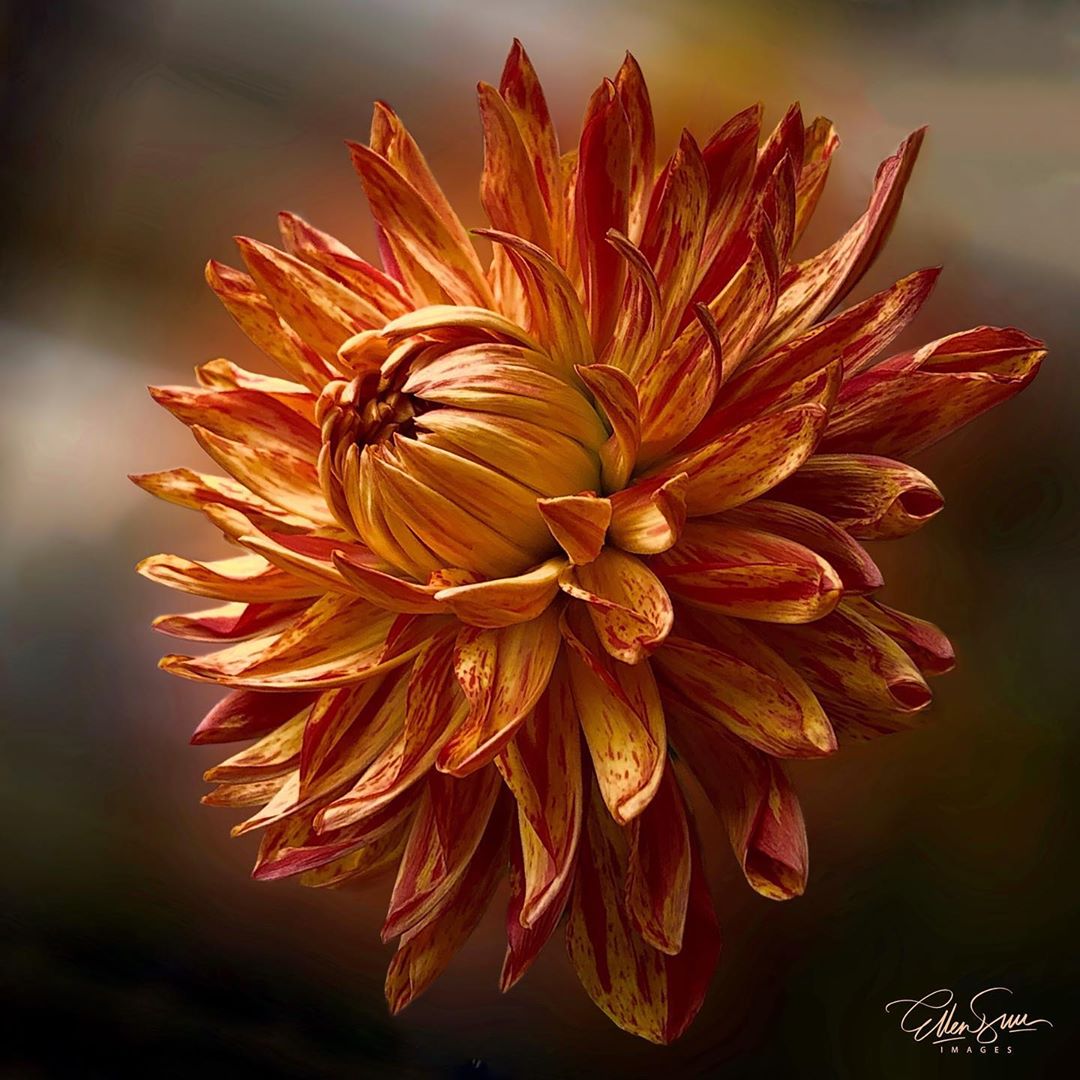 ‘The future belongs to those who believe in the beauty of their dreams‘ by @ellensuugh – “This Dahlia shot is special to me. It’s a combination of reality and background manipulation making it my own. I’ve always envied people who can transpose their vision of beauty. It’s an ability I’ve even longed for. Both my father and sister have great talent for drawing, but unfortunately not so much for me…

About a year ago I seriously started a course for mobile photography and just loved it. Flower and macro photography came very naturally to me and the world of beauty got even bigger. I’m currently working on an editing course.

This eye catching Dahlia with her autumn colours just asked to be captured but the bouquet was too distracting and not to her advantage.

Blurring the background, tuning and turning it around until I was satisfied, I realised that this might be the beginning of an old dream coming true, transposing my own vision of beauty… The first one of a long series I hope !

Shot on IPhoneXS with camera+2 app in macro mode. Edited (background blur) on iPad with Affinity ”

All aglow on its way back to the Earth

‘All aglow on its way back to the Earth‘ by @susiwhollywow

The theme of this week’s photo challenge is ‘Framing’. For this challenge think about sharing your best mobile photos that capture interesting framing. Think about silhoutte’s in doors and windows, the arch of a tree, or the line of a dark shadow.

To enter the challenge simply start sharing your best images on the theme of ‘Framing’ that were taken and edited with a smartphone by using the hashtag #mobiography_challenge_139 on Instagram.