This weeks (slightly delayed) showcase of mobile photography from the Mobiography Flickr Group looks at a selection of photographs taken during that special time of day commonly known as the golden hour.

Photographers tend to love these sunrise or sunset times of day as the light is often softer, the shadows longer and colours warmer. Part of the reason for this week’s delayed showcase has been that I have been away for a long family weekend (with very dodgy internet connection) during which I had the opportunity to take advantage of a couple of awesome sunrise moments myself, one of which I have included in this week’s selection.

‘Sunrise over Bowness’ by Andy Butler – “I recently enjoyed a long family weekend away to the Lake District, an area of outstanding natural beauty in the UK. For the time we were there, the weather was fantastic and on a couple of occasions I was able to go out during the golden hour as the sun was rising. On this particular morning I was heading back when I noticed this lovely view across a park. When I first noticed the scene I knew that the sun would be way to strong for my iPhone to capture what I felt at the time so I positioned myself so that the sun was masked behind the tree. This softened the intensity of the sunlight and created these lovely shadows, silhouettes and tones around the tree and across the park.”

‘Misty Morning Walk‘ by Mad Jeff – “I live on a boat, here on the Oxford Canal in Oxford. I take my dog for a walk in this lovely little nature reserve called Trap Grounds and take a lot of pictures there through the seasons of the trees and wetlands area.

I liked the reflections of the reeds in the water and I composed the picture so that the bare branch of the tree leads the eye into the frame.

I’ve always been a keen user of Hipstamatic, but since the launch of Hipstamatic 300, I’ve been using it almost exclusively. I like it that you can now select the aspect ratio that best suits the scene and that you have a suite of editing tools at your disposal within the app. I don’t tend to do a whole lot of editing though and I tend to stick to the same lens/film combo of Jane Lens/ Ina’s 1982 film.”

‘104/366‘ by Scott Simpson – “This image was taken in South Derbyshire near a place called Ticknall on my 30mile commute to work, spending so much time in the car I’m always on the look out for places to stop so i can capture the varied weather conditions. It forms part of my current 366 project and was taken using the regular iphone6 camera and tweaked using the tune function in Snapseed.”

‘Sunset in North Carolina Taken with my Samsung S5‘ by Tina Dean – “I was visiting relatives in Virginia Beach last summer. In true tourist fashion, I wanted to see as much as possible and photograph the area. We headed to Corolla in North Carolina. After spending a relaxing day enjoying the outer banks with its wild horses and white sand, the skies began to come alive as twilight approached. A spectacular sunset was about to take place. We detoured towards the sun in hopes of finding a good location and found ourselves at the Whalehead Lighthouse. As a photographer, you could not ask for anything more. What a perfect setting! The gazebo at the end of the wharf became beautifully silhouetted against the golden hues and dramatic clouds. The bounce of the sun’s rays as it said goodbye for the day, seemed to be a perfect end to a perfect day. I took this using the HD mode on my Samsung S5. The unedited photo uploaded directly to Flickr via its app.”

‘You put your right foot in…. (Paw!)‘ by Shona.74 – “I’d already taken a few images of the sun setting and didn’t want lots with the same scenery and of course the dogs always look great when they are having fun on the beach! Arthur pictured is one of my very loyal dogs. It’s not that often I get him in a picture but this one worked perfectly.

It was taken with the back camera of an iPhone 6plus and only edited slightly within the iOS 9 app. I lifted the shadows and added some contrast. It was already a very colourful evening. ” 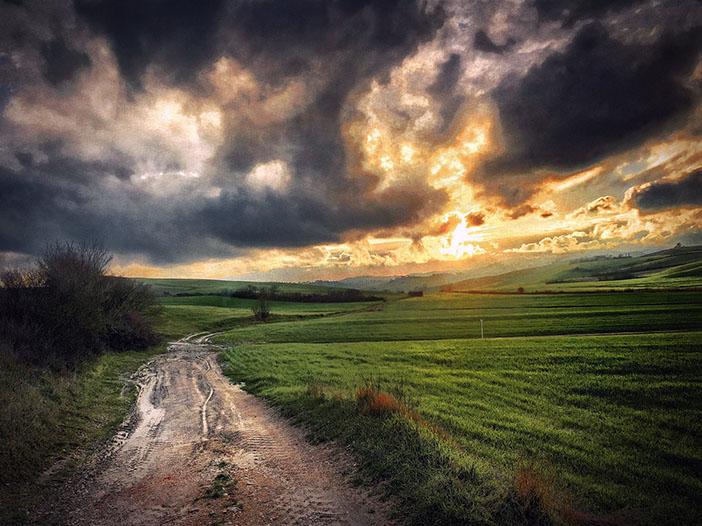 ‘Untitled‘ by Gianluca Ricoveri – “Tuscany, is a beautiful land! I took this photo at sunset along a road that runs in the middle of the lovely hills. I used VividHDR, Snapseed and Stackables for the editing.”

‘Ice Covered Landscape‘ by Greg McMillan – “In late March we had a couple days of freezing rain which turned the landscape into an ice covered wonderland. Some areas had the misfortune of power outages but for the most part, the ice made for some great photo opportunities. I was working some night shifts during that time and when I left work at 7 a.m. I knew I had to get a few shots before the sun melted the ice.

I drove around for a few minutes and found some fences along a farmers property that offered the best chance for a photo. I stopped at a couple of places for a few shots with my iPhone 6s and it was very cold, so unfortunately, my phone kept shutting off.

For “Ice Covered Landscape”, I was actually sitting in the car just off the road in an access path to the field with my phone plugged in to keep it going. With the window down I took a couple of frames of the scene using vividHDR (set to Lively) so I was sure to get some detail in the bails of hay. This was the last photo I took that morning before heading home.”

‘Time is relative‘ by Kostas Pilot