For this week’s showcase of mobile photography from the Mobiography Flickr Group, the theme is emotional photography. The ability to tell a story or convey a mood in a photograph is powerful skill to have. It is also a very difficult one to execute and capture in a fleeting moment. This weeks showcase features a selection of mobile photography that does just this. Featured photographers include Keisuke Takahashi, Kestas Venzlauskas, Ross Mannion, Unaisa Momoitio, Susan Rennie, Eraddatz Photo, Tayfun öztürk and Nick Kenrick .

Let us know if you have a favourite and your top tips for creating an emotionally charged photograph in the comments section at the bottom of the page. 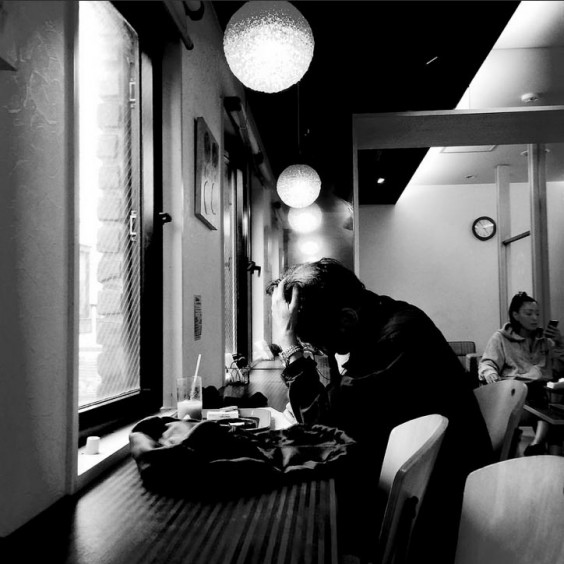 ‘Think‘ by Keisuke Takahashi – “This photo was taken on a cafe in the bakery of my town. I used to go there because there is a smokers seat. What I feel happy about with this photo is the hand of the man. There are nice elements like the window, lamps etc but I feel myself the hand determines the mood of the whole. The photo was taken with Hipstamatic (Watts lens and BlacKeys Extra Fine). ”

‘She was waiting..‘ by Kestas Venzlauskas – “The Shot was made in a very quick way, and my hands were shaking a bit, because she was staring at me, and it was the first time I taken a picture without permission. After that I was passing by – she threw a gaze, but it was too late -“I Shot The Sheriff”

Snapseed was the main editing app, which includes tilt-shift, Superimpose app for delivering the women’s silhouette to foreground out of the background blur, Mextures – for some lights improvements, VSCO for the B&W, after that Snapseed for more drama for lightening.

That’s it. Lovely picture of that special moment, which lasted for a few seconds.”

‘Bad News‘ by Ross Mannion – “Bad News was shot last week while I was visiting someone in hospital. I was waiting outside the ward when this man came out of the coronary care unit and was visibly upset. I wondered if I should take the picture but went ahead anyway. I could really empathize with this man because my father spent a large portion of his last years in hospitals and I was in this mans shoes more than once.

I took it with Hipstamatic (Jane & BlacKeys EF), straightened it a little with Filterstorm Neue and underexposed it with my favourite B&W filter in VSCO. ”

Where Would I Be Without You?

I usually prefer candid street shots but asking permission and getting a pose certainly has its place also. The man was more than happy for me to snap away and he put her through her paces showing off her swimming skills and as this shot shows, how she would dance for a treat.

He also told us how he came to rescue the dog. Her previous owners left her to die tied to something on a small island just off the coast. He heard her barking and went out to see she had chewed through the rope and was in bad condition. He brought her back with the hope of finding her a new home but most people don’t seem to want older, tatty and slightly eccentric dogs so he kept her himself and was very happy he did. It was most definitely a mutually beneficial relationship, one that I get as I have dogs myself. They are not called mans best friend for nothing!

This photo was taken with ProCamera 7, straightened, cropped square, scaled and flipped in Filterstorm Neue. I then opened it in VSCO where I used a BW filter and saved an underexposed version and an overexposed version. I used Blender then and to get the desired effect of having him exposed properly and everything else underexposed. Finally I used Tadaa SLR to get a shallow depth of field.”

‘Larga Espera‘ by unaisa momoitio – “The photograph is taken at a tram stop in Bilbao, as expected. The application used was Snapseed, I blurred it the background and the foreground, along with vignetting to focus on the man.

Another day at the hospital

‘Another day at the hospital‘ by Eraddatz Photo – “Having spent a number of days in the hospital after my wife’s surgery I was sitting near the nurses station and saw this gentleman. He seemed to be feeling as I was. The photo was taken using an iPhone 5 and edited in Snapseed.”

‘Isb?d?n/Ba?p?nar-Kayseri‘ by Tayfun öztürk – “She is live in Isb?d?n village. Isp?d?n is one historical village of Kayseri City from Turkey. She is traditional Turkish woman from village. I used iPhone 5 and Hipstamatic app for this photo. Blanko c 16 film with JohnS Lens.”

Indian boy in the desert

‘Indian boy in the desert‘ by Nick Kenrick – “This image was taken in the Thar desert in Rajasthan in the border area with Pakistan. He is sitting against a mud walled hut which is typical of the region.
It is a tribal region and foreign travelers venture out here to go on camel safaris, on overnight treks across the desert. I noticed his expression and only got one photo before he got up and walked away .. ”