Capturing the Moment in April – Edition 4

To end another great week and kick start a new one, here is a showcase of five choice submissions to the Mobiography Flickr Group from this last week. This week’s showcase features photography from Maktub77 – Street dog, Suz4nne, Richieboy__, Gusbano and eyephoneographer.

If you are an active user of Flickr, then head over to the Mobiography Flickr Group and click join. The best and most eye catching submissions will be featured here. Also the cream of the crop will be featured in the new iPad magazine.

Insomnia And the Hole in the Universe

‘Insomnia And the Hole in the Universe’ by Maktub77 – Street dog – “I live in a small village in Belgium with 80 inhabitants where it is not possible to do street photography. So every Saturday I go to the next town Aachen in Germany.

It’s very important to know the characteristics of a city, what are the best places to photograph, when and how the sun shines… In this case I took the bus and I´m always looking for the best seat with the most possibilities to shoot.

When this woman had sat down across from me, i knew this was a stroke of luck. She was totally bleary-eyed, could barely keep her eyes open and only straed vacantly into space.

For this shot I used the Pure app, a fantastic camera replacement app. For the edit, BigLens, Camera+ and Snapseed.”

‘Untitled’ by Richieboy__ – “I don’t know the precise location this photograph was taken but it’s in London not far from St. Paul’s. I was taking a photo of the street and waited for this guy to walk into shot, it’s my sneaky way of getting candids.” 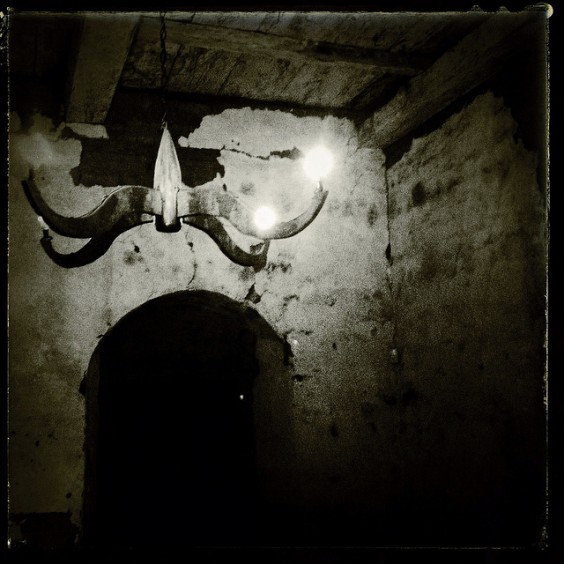 ‘ghost town (5)’ by Suz4nne – “I took this photo and the others titled Ghost Town (Had the Specials running through my head while working on these photos) while making a quick stop at one of California’s historic Missions to stretch my legs from a long road trip. This photo was taken in a cellar San Miguel Arcangel near Paso Robles. I used Hipstamatic (GSQUAD lens, BlacKeys SuperGrain film) and really did minimal contrast adjustments in Snapseed.”

‘Street Message’ by eyephoneographer – “This man is a permanent feature of Neal Street near Covent Garden in London. He’s there most days, drawing on the ground, talking to tourists. If you check my stream, you’ll find that he already features among my photographs. On that day, I spotted the inscription “The Witch is dead” on the phonebooth behind it and decided I wanted a shot of that in the background. At the same time, 2 policewomen approached the man asking him to remove his inscription about marijuana – He kept repeating “This is a joke” but the policewomen were having none of it. I snapped a few shots, and left – I am not sure what happened next – But the man with the hat is still there…
This is what I love about streetphotography – the unexpected, the details in the frame and the people.”

‘Who is there?’ by Gusbano