Capturing the Moment in December: Edition 3

Today’s ‘Capturing the Moment’ showcase is most likely going to be the last one of 2013 before I take a break for Christmas. In this weeks showcase we have mobile photography from Wayne Greer, CJ Hawkins, Anthony Foster, Micha? Koralewski, Sheldon Serkin and Josh St.Germain.

I would like to thank everyone who has contributed to these showcases and to the Mobiography Flickr Group through the course of 2013.

‘Dirt Road In Snowfall‘ by Josh St.Germain – “‘Dirt Road In Snowfall’ was the result of my day job. The company I work for has a Christmas tree farm and we travel there to cut trees for sale at the shop. We had finished our haul for the day, I was sitting in my truck on the side of the road, and thinking about how the work season was coming to a close. Just then, the snow started falling steadily. As I looked out my passenger’s side window, I noticed this dirt road and felt it was a perfectly fitting scene for what I had just been thinking about. Shot and edited with my Nokia Lumia 1020. I turned the flash ON to illuminate the snowflakes that were out of focus and nearer to my phone. I used the Nokia Pro cam app to shoot and the Nokia Creative Studio to process. It was mostly temperature adjustment and clarity. All in all, a very simple edit.”

‘Tradition‘ by Mark T Simmons – “‘Tradition’ was shot in Santa Fiora, a small town in the Tuscany region of Italy. It is part of a 10-image series I captured during a few days spent there in late October this year. The region has amazing light and colour so it is very rare to find photographers who want to capture it in black and white, however the traditional winding lanes of these old towns seems perfectly suited to Hipstamatic and my favourite combination of Jane Lens and BlacKeys SuperGrain film.”

‘The Watcher‘ by Micha? Koralewski – “I’m a founder of “Mobilni” – mobile photography group from Poland. We plan our second exhibition in january, and we decided to make a video trailer for the exhibition. One day we met on 6th floor of a shopping mall parking and started to record the video trailer. Than I noticed a huge puddle on the other side of the parking. I asked my friend to approach to the barrier at the end of the parking, and I took a photo of him and his reflection in the water. At the beginning I didn’t notice the bird was there. I saw it later, when I started to edit this photo. The photo was edited in Snapseed and Mattebox.” 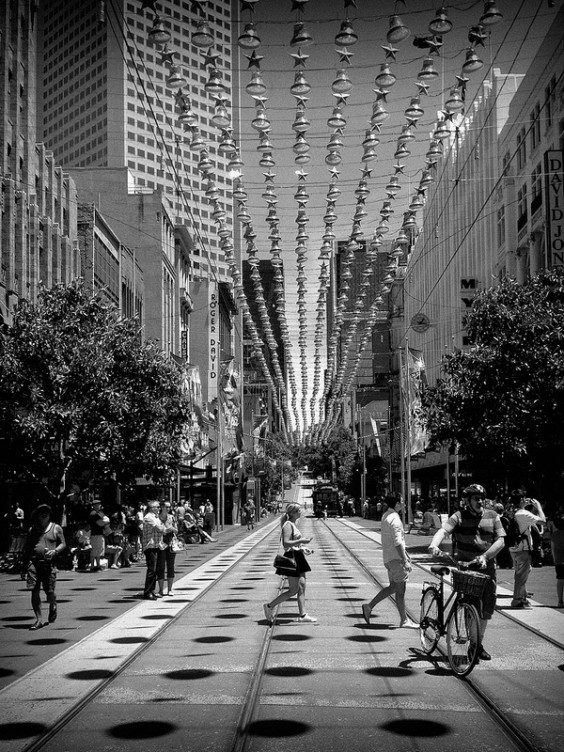 ‘Bejewelled‘ by Anthony Foster – “This image was captured in the Bourke Street Mall area in Melbourne while out doing some Christmas shopping. It was a really hot and sunny day and just loved the shadows coming off the decorations lining the street. I love taking photos in the harsh Australian sun and this day was no different. I used ProCamera on the iPhone, some slight cropping and adjustments in Snapseed and B&W conversion using Tri-X filter in Alt Photo. The decorations reminded me of the iPhone game Bejeweled hence the title. ”

I Can’t Control Myself 1

‘I Can’t Control Myself 1‘ by CJ Hawkins – “The shot was taken at the Beaufort Street Festival held in my home city of Perth, Western Australia in mid-November. I came across a group of street performers who were doing the motionless thing, so I decided to get right in their faces and shoot. A couple of seconds later, they all went berserk, trapping the woman in the foreground amongst them.

I’d accidentally left the iPhone camera on the “Process” setting and I was shooting into the sun too, so the image I started with was not ideal.

I cropped the image in Snapseed and played with the ambience and contrast settings in an attempt to reduce the haze in the original image.

I then took the cropped image into BlurFX and apply a median blur and a motion blur. The resulting image is then painted upon with a variety of different brush strokes in Photo Viva.

Next, the original cropped image is layered with the first Snapseed image, using Superimpose. I masked out all the distracting elements in the image, leaving just the performers and the woman. The image was all about their expressions and movement and I felt that the amused onlookers made the image too cluttered and reduced the impact of the performers in the image. I felt the distortion of the space around the performers added something to the feel of the image.

Then, back to Snapseed for some final tonal adjustments. I really wasn’t happy with the final color tones in the image, so I took it into Oggl and used my favourite lens+film combo, John S + D-Type Plate.”