Paul Brown runs the fantastic Skipology blog where he details the step by step process he follows to produce this amazing painterly style still life and street photography images. During the course of this year I have had the pleasure of getting to know Paul and have interviewed him in the Talking iPhone Photography series as well as for We Are Juxt. For Paul’s contribution to this festive advent calendar series, he tells an incredible story which started with the photographing of a lone figure on the streets of his home town which resulted in the start of a friendship and an interesting collaborative project. 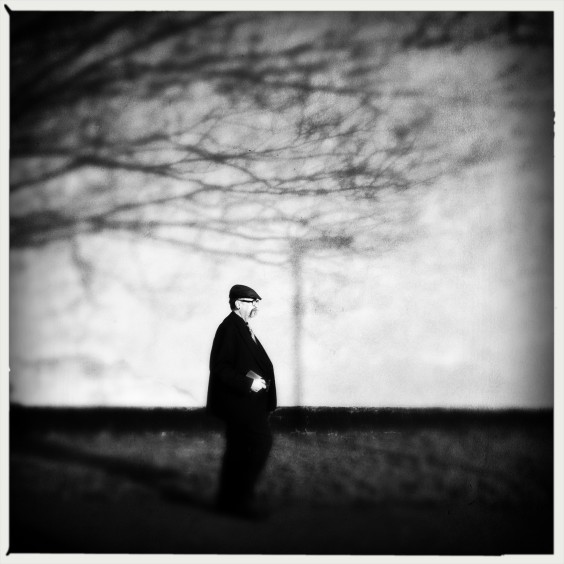 Firstly I’d just like to wish everyone a Merry Christmas!

My story is based around a candid street shot I captured in Hipstamatic. It is one of my favourite images from 2013. I exhibited it as part of a small collection of images in Lincoln, my home town, this summer in a collaborative exhibition with a local mobile photography group I help manage called The InstaChimps.

What makes this image special for me is that whilst the exhibition was running I saw the gentleman in the image and approached him to explain that he was in an exhibition which he then visited. Since then Jamie and I have become friends, met up a few times for coffee and are now talking about ways we may be able to work together.

This image is about Jamie, so without further ado I will let Jamie tell you about our story from his perspective…

Thinking back it’s quite possible that I was aware of somebody taking a photo with (probably) a phone camera but then that happens all the time and I had no reason to think that I was involved or included in the frame.

Sometime later (I have no idea how long, but the photo had been printed and framed and was on a wall in an exhibition in Lincoln library) Paul stopped me in the street very near to the location of the photo. He told me about the exhibition and explained a little about how the photo had come about. That he had noticed the shadows of the trees on the wall and was considering a photo and that I’d walked into the shot (not sure I’m using the right words with ‘shot’ and ‘photo’ and ‘frame’). He seemed pleased that I was so happy about being in the photo, maybe relieved. He also offered to give me the print when the exhibition finished. Something about the way he talked about it made me feel at ease with the idea I was in this photo and wasn’t at all apprehensive about seeing it.

The next day I went to the exhibition with my mum. Searching for ‘my’ photo added an extra dimension to an already enjoyable exhibition. What was great from the start was to see that a group of people had contributed to an exhibition, agreeing to a standard size and framed in the same way, but that the styles were so different. It was interesting and clever and often funny.

For me that’s one of the things I like most about Paul’s photos of people. I definitely get a sense of wanting to know more about the person and the situation. I also know that that particular moment is the one I’m looking at. Not a single moment before or after.

The idea that I could imagine a ‘story’ with all the photos but my own was quite important to me and it was one of the things I most wanted to share with Paul when we met for a coffee the next week.

I’ve written a lot of instrumental music, mainly for piano. This includes music for independent films and for exhibitions. I think both Paul and I are now thinking about the possibility of collaborating; maybe a slide show with specially written music.

As I learnt more about iPhoneography and other phone camera photography I wanted to know more. There is a community of people, inclusive, and interested in sharing. And the sharing is not only about sharing the images, but goes as far as sharing processes and techniques. Not least, of course, Paul’s own Skipology blog which I’ve since followed via Facebook. I’ve enjoyed reading through the processes and seeing the stages the images pass through on their way to the finished photo. I find this sharing to be exciting and inspiring.

My impression of the music world is that it’s blighted by a redundant notion of competition. I don’t think I need to do more than point out that there are charts in music. I wonder who’s this week’s #1 in painting or sculpture? We just don’t think in that way about these arts.

So, getting to my point, I wanted to believe that a similar community existed for portable music. Not necessarily just smart phones, but other portable, battery operated devices. Looking online was a bit disappointing. The instruments were seen to be superseded by the next new device and the most common thing to find was people demonstrating the potential of the next new thing.

Paul and I talked about this and I now really want to start to draw people together with an inclusive approach to making and sharing music. Perhaps the time is right, and perhaps I’m the person to start it.

Paul: It is so rare to get to know a random person because of a random tap on an iPhone, especially if you don’t have a discussion at the time. Maybe this will be a unique experience for me. More than the image itself the story of the person behind the image makes this meaningful to me. The fact Jamie has a talent for a different art form but draws inspiration from our world of mobile photography fills me with pride about our amazing, talented and passionate community.