Matthew Wylie is an iPhone street photographer who grew up in Texas. He studied literature and writing in university and taught at that level before I emigrated to Canada where he currently lives and teaches. Because of his background in literatire he is very interested in the relationship between writing, photography, and storytelling.

Matthew has had a selection of his work exhibited at places such as the MPA Shadow Stories exhibit at the Soho Art House in New York, the MOPLA event in L.A. He has been featured in Street Photography Magazine, Snap Magazine, and The Inspired Eye Magazine, and will be included in Street Expose 2, a book of street photography that includes artists and photographers from all over the world.

He has some portfolios and Hipstamatic combo studies on the Hipstography website, and earlier this year was awarded Creative Portfolio of the Year and Best Abstract Photo of the year via the site and its jury panel.

How were you first introduced to iPhone photography?

Well, I got my first iPhone in 2012 and was introduced to the Hipstamatic app by a close friend. I immediately fell in love with it and was attracted to the analog approach and the idea of having lenses and films.

From there, I joined a few Facebook groups, like Hipstamatic Slovenia and Hipstamatic Sardinia, that were dedicated to hosting weekly themed photo shoots. In terms of the iPhone, I really owe a lot to these groups and the members in them because they allowed me to witness and explore what the Hipstamatic app could do as a camera, and the same can be said of Hipstography’s daily publications. Over time, I branched out to places like Instagram and Flickr, which has just allowed the evolution of production and sharing, connecting with others, and learning, to continue.

How do you approach your iPhone street photography and the images you capture?

I just get out there. Sometimes I’m looking for an image that was inspired by a novel or story I’ve read; sometimes I’m looking for an image to inspire something I want to write. And sometimes none of these. Always though, I’m just out there and I let my eye guide me. I’m not thinking very much when I am shooting. I just get into a zone and the world slows down for me and I try to capture something worth looking at, and perhaps remembering.

I usually am simply moving with the flow of things, shooting from the hip. If I am not shooting on the way to and from my job, then I am aimlessly moving. Regardless, the phone is always in my hand, out, and ready. The Hipstamatic app is perfect for this due to the proximity between the thumb, the palming of the phone, and the trigger button.

I follow my eyes and my eyes are not something I’m acutely conscious of when I’m out there. I quickly identify components of a scene, whether light, a backdrop, or a subject, and anticipate how they could all come together, then I click. Most often, the elements don’t come together. But sometimes they do. You have to let your eye anticipate things. Seeing multiple things at once is key, at least for me. Often, it’s easy for us to predict moments or endings in films, stories, etc. It’s the same thing when you’re out shooting on the streets. You observe, process, and predict – and this, at least for me, has to occur quickly, within seconds.

Yes, sometimes there is something about the setting – a backdrop or sliver of light – and then I may hang around a bit to see what passes by. But I don’t usually do this due to time constraints and… something about it feels inauthentic to me… but yes, it does happen. Sometimes your anticipation of the scene takes a bit longer to occur. And so you wait.

What apps do you use and is there a process or methodology that you apply to your post production editing?

Like I said, Hipstamatic is usually my go to app, well, at least for black and white, which I guess is what I shoot the most in. For colour, I use VSCO. I try not to dabble too much with post production. With Hipstamatic, it’s usually what you see is what you get. With VSCO, you have a wonderful colour palette to choose from and some cropping / framing options, which contributes to the aesthetic I aim for. Once in a while, I’ll catch an image that lends itself more to a… I don’t know… “painterly” style and something that’s more obviously post-processed – and so Mextures is good for that sometimes.

What are your favourite Hipstamatic Film/Lens Combos?

The G2 / Black Keys Super Grain combo is simply ideal for black and white iPhone street photography on sunny days. It’s so clean. The US1776 film is my favourite film though – something about it is so very imperfect, yet nostalgic and beautiful and I just love that. It’s nice to combine with G2 on darker days and the Lowy lens on bright days. The Lowy lens is probably my favourite. Hipstamatic has far too many fluff lenses / combos that just will not stand the test of time. The Lowy lens is the most straightforward lens to work with. 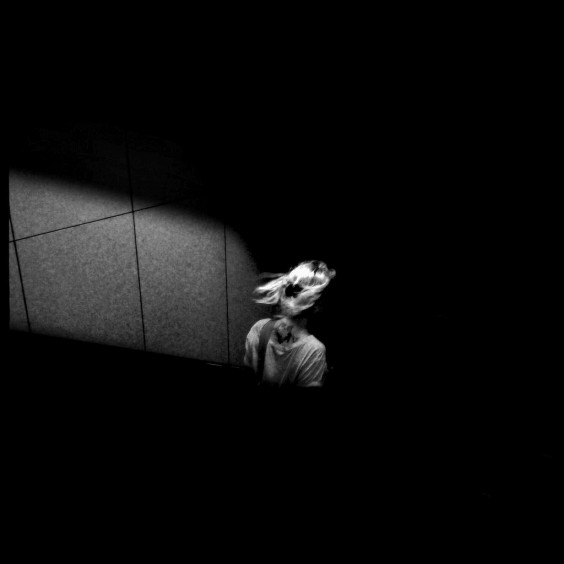 Are there any photographers that have been a big influence or inspiration to you?

Bresson, Saul Leiter, Vivian Maier, Dan Cristea – too many to name! I guess more than anything though, my friends and the communities on Facebook and Instagram / Flickr continue to inspire me on a daily basis. It’s a true blessing to have not just these new tools – like a camera that’s also a phone that’s also a stereo that’s also a movie maker, but to be able to connect with others in terms of sharing and learning… just engaging in dialogue with the talented artists that are out there, even if the dialogue is purely visual – that’s just such an amazing thing to me.

What would be your top tips or words of wisdom for people looking to improve their mobile photographers?

Shoot every day. Study light constantly – even when it’s dark. Study your own work and push yourself to evolve. Believe that you have something to say with your camera!

Tell us about a few of your favourite photos and the story behind them?

There’s a photo I have of a woman walking near a wall that has this giant image of an arm on the wall and the arm is hovering above this woman. It was taken in the dead of a brutally cold and long winter for us here in Canada. It was so hard to get out that winter to shoot and just… everyone was so down due to the constant grey and cold. It was hard to keep your spirits up. Seeing this woman though in that moment – her posture, the hand on the wall – it spoke to me of struggle and it spoke to me of the human spirit. I read it as something existentially positive.

There’s this other photo that is a high angle shot of man who looks to be standing before a gulf of shadows. When I shot this, he was actually walking quite briskly and this shot was just one of about 7 I fired off. I like this photo because it is just another reminder of how the camera can help us see things, capture moments, that the eye simply cannot. I just find that so beautiful about photography.