Ryan Vaarsi is an iPhone photographer from who was born and raised in New Jersey, and now currently living in Culver City, California. His photography has been featured in several ‘Capturing the Moment Showcases’ as well as Mark T Simmons ‘The Photo I am Most Proud of‘ as well as being part of last years 24 Mobile Photographers til Christmas series.

As a cancer survivor, now closing in on 25 years in remission, Ryan has spent most of his professional life in the publishing business, primarily as an editor, with occasional forays into journalism. He has gained many notable credits to his name including being a member of Grryo (formerly WeAreJuxt) and spent a year curating our 1000 Words Flickr Showcase, now in the capable hands of Dilshad Corleone (@italianbrother). Ryan’s work has been featured in LA Weekly, Lys Foto Magazine, Discover LA (the Los Angeles Tourism & Convention Board’s website), FYI Magazine, the LAist, the App Whisperer, the National Geographic Daily Dozen, LifeInLoFi, the Atlantic’s “What America Looks Like” series as well as Mobiography. He has also had his work featured in the Bye-Bye Exhibition at C/O gallery in Berlin and the JOINT Exhibition at La Tentacion in Tijuana.

How were you first introduced to iPhone photography?

That’s a tough one. I don’t think there was a “Eureka!” moment for me. I’ve been interested in photography for a long time and I’d already been exploring digital photography with an Olympus point-and-shoot for a year or two when I got my first iPhone (a refurbished 1st gen). I used it more like a toy at first. The resolution was so low and the selection of apps so meager that it didn’t feel like a real camera at that point. As the hardware improved and Apple’s app ecosystem exploded, the iPhone gradually replaced the point-and-shoot.

How would you describe your photographic style?

I’m an absolute freak for photojournalism, documentary photography and representational photography in general and those are the kind of images I love to create. I’ve adored it since I was too young to really understand why but I’ve come to understand that I love telling stories or being a conduit for other peoples’ stories. I was a reporter for a hot minute when I first got out of college and the story-telling aspect of the job was a big part of the draw for me. When it comes to photography I’m not as strong a storyteller as I intend to become. I’m taking a class on story-telling with photography this summer.

How do you approach your photography and the images you capture?

I suppose my approach is dictated by the subject. When it comes to photographing people my natural instinct is to be a fly on the wall; to capture people acting naturally whenever possible. That said, I’m very interested in doing much more portraiture, both formal and informal. In those instances in which I’m photographing events, I recently photographed an animal rights protest in LA, my goal is to find a perspective another photographer might not see. That perspective may be a physical angle or a selective focus or any number of things, but my goal is always to create an image that is somehow unique to me.

Now she walks through her sunken dream

What apps do you use and is there a process or methodology that you apply to your post production editing?

I generally keep my editing simple. I like my photos to be crisp and bold, whether in color or black and white. My go-to apps are Snapseed and VSCO, with occasional forays into Colorsplash and Mextures. Adjusting to the light in Southern California has been an unexpected challenge. Here in the LA Basin we have high noon light for something like 12 hours every day and learning to deal with that has been a serious challenge.

How has being apart of the Grryo community helped and inspired you in your photography?

Ye gods, how to answer this in less than a couple of thousand words? Being part of Juxt/GRRYO has opened up so much for me creatively. I’ve been exposed to art and artists I might never have encountered otherwise. In particular assembling the 1000 Words Flickr showcase was a wonderful experience in that I was always trying to highlight a broad variety of styles. Those styles have informed my own approach to photography both overtly and as a matter of creative osmosis. Being a Juxter has also driven me to become a better photographer. There’s a sort of latent competitiveness that I feel. Not a need to one-up anyone so much as a desire to be worthy of having my work seen adjacent to theirs.

If you could spend the day with any photographer or artist, past or present, dead or alive, who would it be and why?

Yikes, just one? That’s tough. Probably James Nachtwey, the photojournalist and Magnum photographer. He’s taken some of the most memorable, shocking, informative, wrenching, beautifully-composed photos I’ve ever seen. He spends much of his time in some of the world’s most dangerous spots, documenting some truly grim events, and I suspect that 24 hours is about all I could withstand.

What would be your top tips or words of wisdom for aspiring mobile photographers or artists?

Have fun! Play, experiment, be your own biggest fan. It’s not about how many Likes you can accumulate or how many followers you have, it’s about creating something that you can feel proud of and enjoying the creative process. There is so much talent out there, connect with other photographers and share your work, your ideas and your struggles. Inspiration is contagious, go catch it!

Tell us about a few of your favourite photos and the story behind them? 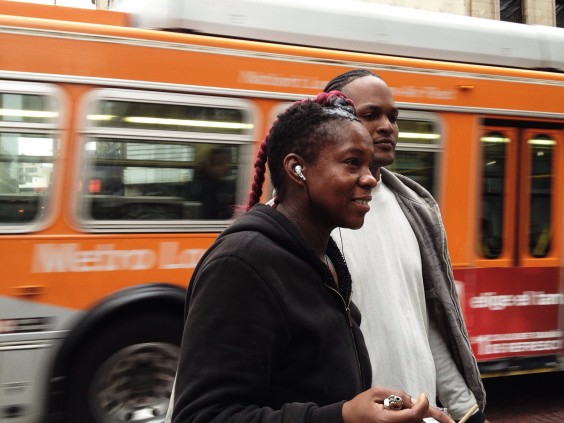 Last year I attended a workshop put together by the founders of the 24-Hour Project, Sam Smotherman (@whittiersam) and Renzo Grande (@aliveinnyc). We met in Downtown Los Angeles bright and early, Pershing Square is interesting at 7 a.m. and paired off with some working photographers and artists. My group spent the morning exploring the neighborhood with Robert Stacey (@visualwhiplash) a fantastic photojournalist who was kind enough to pass some of his wisdom along to us. We came across these two folks during the course of our stroll. She approached us and asked for a buck or a light or both. She told us that nearly everything she owned had been stolen the night before. I made the assumption that she was homeless, which I probably shouldn’t have. Not everyone who walks the streets downtown is homeless, though many of them have some tough stories to tell.

Fear Factory live at the Whiskey a Go-Go

True confession, I used to be That Guy at the concert who spends far too much time taking photos (“music photographer” is another of my dream jobs). I’ve managed to get a grip on myself these days, but I still snap a shot or two, especially in a smaller venue if I’m nice and close to the stage. Smartphones aren’t known for the dexterity with which they handle odd lighting situations, so with this photo I stepped outside my comfort zone and applied some blur and texture to get a sense of depth and jiggered around with the color a bit. The band did the rest.

I’ve Got A Bad Case Of Neko

Despite some neglect over the years, LA’s theater district is still the largest concentration of historic movie theaters in the US. Some of them, like the Orpheum, have been beautifully restored and are still active entertainment spaces. They make a wonderful, color-filled backdrop for the odd bit of street photography. The show didn’t suck either!

I suppose I shouldn’t take photos out of my car window, but in my defense I was at a stop light and just look at that street art! LA is one of the most thoroughly decorated cities I’ve ever seen and some of the art is just breathtaking.