The theme of this week’s showcase of mobile photography from the Mobiography Flickr group is silhouette’s. All the photos featured this week illustrate how silhouettes can be creatively used to add interest to a photograph. From Montse Abad’s abstract photo-art image titled ‘Lejos quad la infancia’, to Lee Atwell’s high vantage point street scene and Elaine Taylor’s striking image which combines the warm tones of an evening sunset with the high contrast silhouette in the foreground.

She Knelt To Take A Photo 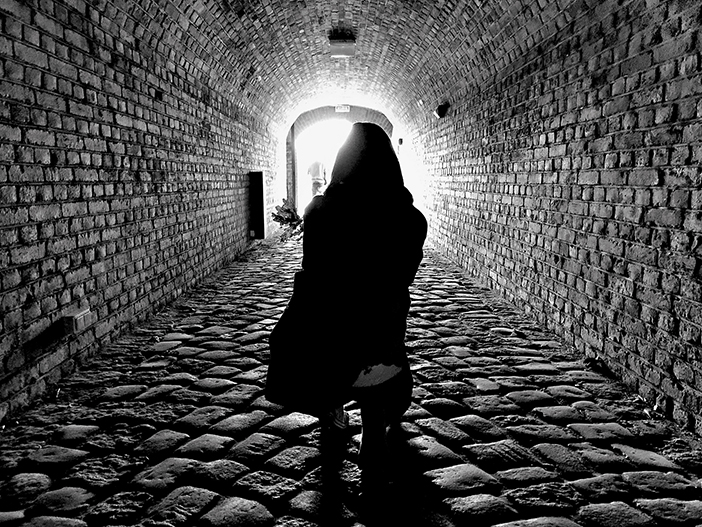 ‘She Knelt To Take A Photo‘ by Dariusz Sobiecki – “I took the photo while exploring an old military place in Gda?sk, Poland. The important part of it are tunnels, so I took the opportunity to frame my companions’ silhouettes, light and shadow play and all the symbolic potential it presents. In post editing, I did the basics with Snapseed with a slight HDR filter enhancement. With my own formula based on a few moves in Pixlr, I turned it to black and white. The final touch with Ansel gave it the desired look.”

the intensity of light

‘the intensity of light‘ by Lee Atwell – “The intensity of the late afternoon sun, the movement of the child, and the lens used helped to create this effect of both blurring and whiting out the features while intensifying the shadow. I used the Hipstamatic / Oggl app (Tinto Lens and US 1776 Film) without any post editing.”

‘Universal Fountain of Love‘ by Paul Yan – “The photo was taken at the fountain in the frontal plaza of the Hyatt Hotel, Beijing which was pretty close to the Royal Palace/Forbidden City/Tian-An-Men Square. The fountain is lit from inside the rim in the evening around which people like to take selfies or pictures of their family and friends. The plaza is usually swarming with people in the evening and it can be hard to take a clean photograph of the fountain most of the time if that’s what the photographer desires.

The girl in the frame had just finished posing for her friend’s smartphone standing on the rim of the fountain and was bowing down to pick up her purse, getting ready to leave when this photo was taken. By that moment, I had already screwed on the Manfrotto KLYP+ wideangle add-on lens to my iPhone, and manually set the focus and dialed in the shutter speed, ISO value and white balance in the ProCamera app that I’ve been shooting with literally all the time after purchasing it a few weeks ago. The Snapseed app was then used to enhance the highlights and darken the shadow areas even more, and to render the photo black-and-white.

Let us all be ever-luminous fountains of compassion and love!”

‘La vie devant soi‘ by Nicolas Xanthos – “This summer I visited my family in Switzerland. It was a heat wave and we were looking for ways to cool off. That day, there was a thunderstorm in the late afternoon. Towards dusk, we went to the beach; usually it is very busy but at that time it was almost empty. The twilight, also following the storm, was beautiful and the overall atmosphere was very peaceful and serene. I walked along the shore, and at one point, I saw this silhouette just by the lake.

I took the photo with Oggl (John S + Blanko BL4). With Snapseed, I straightened the photo, I edited tones with HDR filters and Drama and I darkened the road and the silhouette for a better contrast to the bright atmosphere. With Handy Photo, I put away some buoys so the lake is without objects. With iColorama, I made a version with the “simplify” option and I mixed this version and the previous with Superimpose to obtain a final version sharper and more sober.”

Billy. Dancing on the rooftops 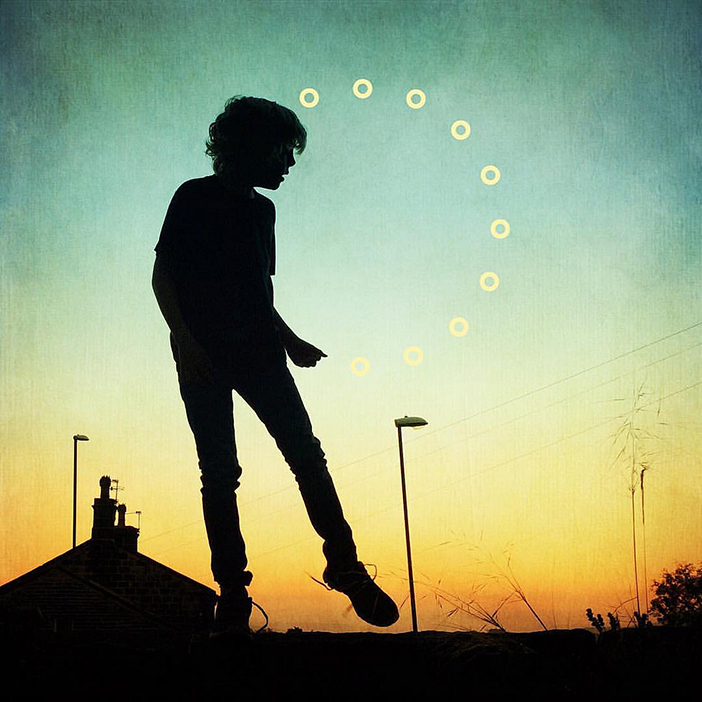 ‘Billy. Dancing on the rooftops.‘ by Elaine Taylor – “This was taken early evening while Billy and his older brother, Charlie, were playing and jumping around in the garden. We were on our way out for tea and running a bit late. As I was locking the front door and shouting at them to get to the car, I noticed the light as they stood on the garden wall. I thought I’d be able to capture a decent silhouette shot so I stopped shouting and quickly took a few shots before they noticed me (which didn’t take long as I was crouched down low on the ground).

I chose to share this particular image as I really like the movement in it, especially in his shoe laces (which I’m always telling him to fasten).

I shot it with ProCamera on my iPhone5s, cropped it and made a few tuning adjustments in Snapseed then added texture using Stackables. I’m lucky enough to be a beta tester for Pixite, and used their latest app, Assembly, to add the circles.”

And the boy who knew nothing at all

‘And the boy who knew nothing at all‘ by drzzz1977 – “I took the photo at The National Art Center in Roppongi, Tokyo. All week it’d been bright and sunny and I’d been itching to take some sunny photos. However, on my day off the weather changed to this dull, cloudy, uninspiring weather so I decided to visit some galleries. When I arrived at the National Art Center I was immediately struck by these amazing lit up, striped backdrops that are on every floor. In fact, the whole building is really beautifully designed. Anyhow, it was just a matter of patience and waiting for the right people to step into frame. A few minutes later I saw these two boys playing and waited until they passed by. After that I tweaked the image (particularly the contrast) in Snapseed.”

‘Secret‘ by Alejandro Cendan Rodriguez – “To create shadows is always good to look for an interesting background and the best position when taking the photo, and often takes several photos before arriving to take the best. That happened in this which was taken with Hipstamatic 300 using Lowy lens and BlacKeysXF film, was not necessary to make much editing, just a few settings to enhance the shade and was very pleased with the result.”