This weeks Mobiography Flickr Group showcases a selection of painterly styled iPhone photos. From the vibrant colour of Vivi Hanson’s ‘A breathtaking sea of red’ to the dark shadows, high contrast and texture in Giancarlo Beltrame’s ‘Shadows 5’, this week’s selection beautifully illustrates that the humble mobile photographer can take an ordinary photograph and with a small selection of app’s, vision and skill produce a piece of artwork that wouldn’t look out of place on the walls of an art gallery.

‘The tortoise always wins the race! / Story Book Series‘ by Tuba – “This image belongs to my “Story Book” series which I try to interpret well known fables and children stories with todays changing moral values.
About my workflow; I composed multiple images on Leonardo app and finally ran through Pic Grunger to create a feeling that we are looking at a page from a worn out story book.”

A breathtaking sea of red

‘A breathtaking sea of red‘ by Vivi Hanson – “The major art installation Blood Swept Lands and Seas of Red at the Tower of London, marking one hundred years since the first full day of Britain’s involvement in the First World War. Created by ceramic artist Paul Cummins, with setting by stage designer Tom Piper, 888,246 ceramic poppies will progressively fill the Tower’s famous moat over the summer. Each poppy represents a British military fatality during the war.

The poppies will encircle the iconic landmark, creating not only a spectacular display visible from all around the Tower but also a location for personal reflection. The scale of the installation intends to reflect the magnitude of such an important centenary creating a powerful visual commemoration.

We are hoping to sell all of the poppies that make up the installation and, in doing so, raise millions of pounds which will be shared equally amongst six service charities”

I filled out a form to volunteer planting these beautiful ceramic poppies. I was so lucky to be accepted and on Friday 10th October I joined 150 volunteers for our afternoon shift. We were so lucky, weather was beautiful. We spent 4 hours assembling and planting poppies and were allowed to go wandering around the moat to take as many photos as we wanted. Being down there in a sea of red was breathtaking and incredibly touching! An amazing experience and I am so grateful I was chosen as a volunteer.

I took the photo with VividHDR then ran it through Glaze and applied one of the filters. I blended the original photo with the Glaze one using Blender and finished editing with DistressedFX.”

‘Solo Flight‘ by Andrew Lucchesi – “I was waiting in my car at a stoplight when a flock of grackles swooped overhead. The black birds looked striking against the white clouds. I shot several photos through the windshield, hoping to capture a good shot of a group of birds in flight. But when I looked through the photos later, this solo flier jumped out at me. I cropped the image in Filterstorm and then added color and texture using Distressed FX. ”

‘Shadows 5‘ by Giancarlo Beltrame – “More and more I am looking for my art to be condensed around a few strong themes. After the eye, masks, ghosts cinematographic and of Francesca Woodman, now is the time of the shadows. Maybe because in the shadows, like behind the masks, hiding my true self.

I’ve always been drawn to the shadows, and when I was teaching at the University semiotics of cinema i was showing the students how, especially in the film noir classic, they were the bearers of great significance and have a great aesthetic power.

This image belongs to a new series in black and white, which began with a visit to an exhibition of art that took place in my hometown, Art Verona. Visiting the stands I was struck by some artworks that created special effects of shadow, which I tried to capture with my iPhone 5.

This particular one was inspired by the initial work consists of multiple layers of glass overlapping forming a human silhouette to the view. However, being transparent, created a strange effect with the surrounding artwork. Especially a large portrait of a head that was right behind the space where there should have been his head.
I shot with Hipstamatic, Foxy lens, film C-Type Plate.

With TouchRetouch I cleaned everything that was unnecessary in the background, including the frame of the picture with his head. With TouchPro I set the Emboss effect to get the grit from the wall. With SuperImpose I superimposed the writing. And finally, I set the black and white with Photocopier.
And the shadow in my mind took shape.”

‘the Gaze ll‘ by Riel Noir – “Gaze 2 evolved from thoughts regarding how we examine our physical presence/appearance in a mirror, rearranging the pose, staring with intent to enter this being, whilst loosely referring to Lacan’s theory regarding the Gaze.

Arranging ones self on the iPhone screen might be thought to be reflective of this process.

I did a lot of hopping around from one app to another intuitively chasing the look I was after. This at times became quite hectic, and as such I cannot remember the precise route taken.

It would include Art Studio, Snapseed, Grunge, Distressed FX, PixlrExpress and Photo Copier.” 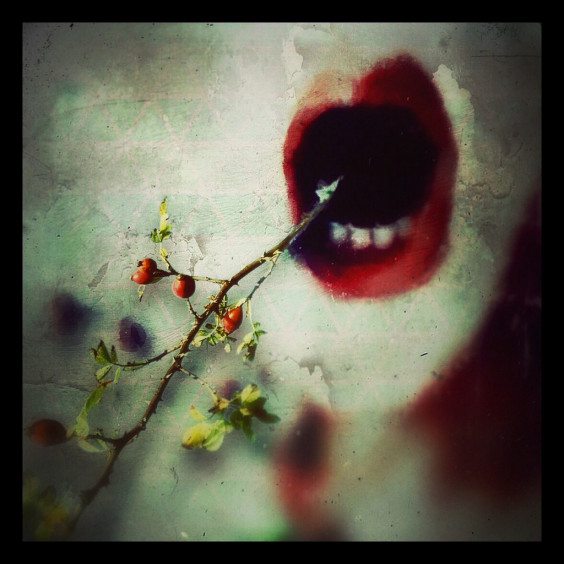 ‘Keep and Eat‘ by Cattis C

‘Dikewatch‘ by tania_konnerth – “I always wanted to take a good photo from a sheep on a dike and a got my chance on short trip to the North Sea (in Germany). There they were: lots and lots of sheep! But they were pretty shy so it took me some time to find a real brave one, which could stand me crouching in front of him in order to get my picture slightly from the bottom up against the sky. I used Hipstamatic (Sergio + Blanko1) and added some rougher texture with Iris in order to express the harsh climate in this region.”

‘2014 Flickr Image – 267‘ by bob eddings – “Devil’s Elbow is an unlikely name for this beautiful and intimate bay situated to the south, below the Heceta Head Light on the rugged coast of central Oregon. Summer was just giving way to Fall, but not before managing a heroic last gasp as I headed back up the coast toward Portland after visiting a dear friend in Florence. I can never resist stopping at this beach for the many wonderful treats here, including capturing the backdrop of the Cape Creek Bridge. But the beach this day was also calm and inviting and I succeeded in a number of satisfying photographs with an iPhone camera, which I later processed on an iPad to achieve the texturized treatment. That drive turned into a whole series of images recently posted, including one at the same beach featuring a pair of red “Dorothy” shoes some little girl had inexplicably left behind and, as if by fate, posed perfectly for me to find. For all its beauty, the beach was nearly deserted. Luckily for me there was this gent who stopped for a quick beach outing with his best friend.”

‘One Fall Day‘ by Mike Bowers

Windows Stare through me, Maybe you’ll see the world Or maybe my soul. Who Knows, We’re all just windows. (Jordan Anderson)

‘Windows Stare through me, Maybe you’ll see the world Or maybe my soul. Who Knows, We’re all just windows. (Jordan Anderson)‘ by kawol1