The theme of last week’s Mobiography Photo Challenge was ‘Abstract’. The photos featured in this showcase all illustrate how different photographers have approached this topic and as a result have created some interesting abstract images. Close cropping into patterns and detail, are popular ways in which you can create an image that has a wonderful abstract quality to it.

This week, the theme for the photo challenge is ‘The World Around Me’. For this challenge think about sharing your best mobile photos that capture the world around you. It’s a fairly open ended topic and could encompass street and urban locations, stunning landscpes, animals and nature or your home.

To enter the challenge simply start sharing your best images on the theme of ‘The World Around Me’ that were taken and edited with a smartphone by using the hashtag #mobiography_49 on Instagram.

‘Afterglow‘ by @di.monheit19 – “While out on a photowalk at the local university, I sat down to catch my breath in front of a building. As I looked up, I was intrigued with the balconies jutting out! I snapped the image with my iphoneX. When editing I used Hipstamatic to put a different spin on the image.”

Excuse me, where is the exit?

‘Excuse me, where is the exit?‘ by @ferzbow23 – “I took this photo about a month ago or so. My sister and I were attending a concert at this new venue, which has been open for a little more than a year, now. It was the first time we had gone to the venue, and I was amazed by its design. I remember walking into the lobby of the place and being completely absorbed by the architecture of the building. The place felt huge for a moment, way bigger than it really is, so bright, inviting, i don’t know. A feeling i don’t get very often, I guess. I got my phone out of my pocket and started shooting the roof and the stairs of the hobby. I remember thinking “Dang, this is a great place for abstract shots” and kept taking photos.

I use a Motorola moto e4 plus, and Camera FV-5 to have more control on exposure levels. In regards to the editing process, I used Snapseed, my go-to editing app. I didn’t do much to this photo, really. Reduced the color, increased the contrast, highlits, and shadows using the Tune Image option. After that, I just added a Grainy Film filter, L2 I believe, and that was it.”

Why I always look up 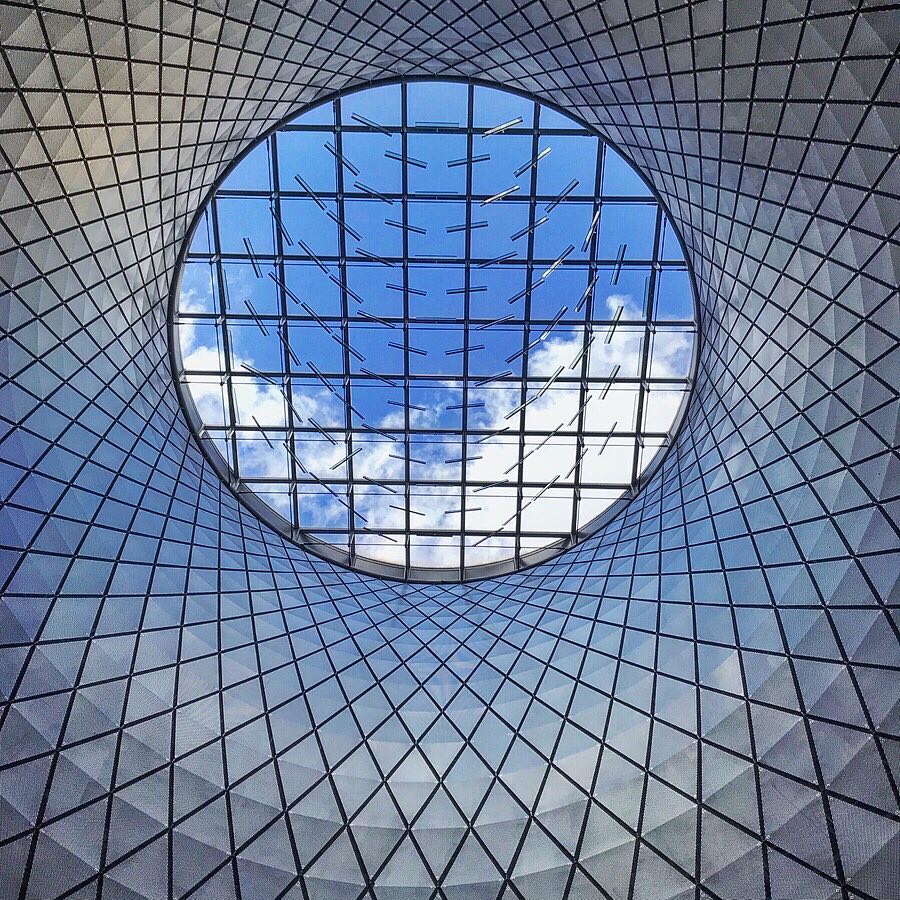 ‘Why I always look up‘ by Barbara Frish @iphonecameragirl – “This image was shot with my iPhone 7plus. It’s the ceiling of the lobby of the Fulton Street Subway station in NYC. It’s quite an amazing building. Looking up to the skylight, the sky was blue and it reflected off the rest of the ceiling…it was amazing. The only edits were a crop and a few areas darkened using the selective tool in Snapseed. “

‘Liquid marbles‘ by Jill Lian – “Playing around with liquids of differing viscosity, I created this abstract of tiny bubbles with milk, oil and paint. It’s very mesmerizing to watch the bubbles come up to the surface and explode. The whole area of this photo would fit on a dime.

I shot this on my iPhone 7Plus, with an olloclip macro attachment, through the Hipstamatic app. I used the Valparaíso pak with no other adjustments needed. ”

‘Geometrical‘ by Joseph Cyr – “As downtown Los Angeles continues to evolve into a more pedestrian-friendly place, The Broad Museum has quickly become one of its most photographed buildings. I took this shot with an iPhone6s, then used snapseed to straighten the angles for perspective, desaturate the color, and add some grain. By isolating this corner of the façade and including just a bit of the neighboring building, and excluding the sidewalk level, I ended up with this minimal cityscape – an abstraction of lines and shapes.”

Looking up through dome at MIT

‘Looking up through dome at MIT‘ by @rawsdeb – “This photo was taken at MIT in Cambridge, MA. We were standing in the room with the dome and I was struck by the view looking straight up through the dome. It was taken on an iphone7+ and edited in Snapseed.”

Welcome to the Warp Zone

‘Welcome to the Warp Zone‘ by @rural_exposure – “The capture was taken in a construction site while walking my dog. As I walked passed and noticed how many pipes were lined up I thought this could be edited into something cool. The edit was done by making it black and white then switching to a negative exposure. ”

Standing in the light of love. Where everything is possible.

‘Standing in the light of love. Where everything is possible.‘ by Susan Blanda – @susanblanda – “This image was created entirely on an iphone 7plus using an intuitive process of flow. I moved back and forth between Snapseed, VSCO, Mextures, and Enright apps until the image captured the emotion, light, and composition, that I desired.

As with most of my work, this image came about after experiencing a life situation. It reflects my sense of reclaimed focus, after recovering from the deep loss of a loved one.

My insight over the years, is that Love is always there to pull you back from disappointment and loss— into the arms of Grace—-no matter what the loss or challenging situation.”

‘Stairs‘ by @yycfred – “This photo was taken at Studio Bell which is located in Calgary, Alberta, Canada and is the home to Canada’s National Music Centre. This ultra-modern building was opened in 2016 and encompasses the Canadian music museum, performance hall, live music venue, recording facility, and broadcast studio. It’s a beautiful building that adds character to the East Village area of Calgary’s downtown.

As you wander through Studio Bell, one can’t help but be captivated by the building’s unique design, the open spaces, the colour and finish of the tiles. The interior design and open spaces provide numerous interesting vantage points and angles which led to the photo of the stairs, the earthen tiles and the angled “lines” of Studio Bell.

This was taken with an iPhone 7 as a square photo and I did some minor editing (HDR and image tuning) was done with the Snapseed app.”

‘Tiles for miles‘ by @chris_tadros

This week, the theme for the photo challenge is ‘The World Around Me’. For this challenge think about sharing your best mobile photos that capture the world around you. It’s a fairly open ended topic and could encompass street and urban locations, stunning landscpes, animals and nature or your home.

To enter the challenge simply start sharing your best images on the theme of ‘The World Around Me’ that were taken and edited with a smartphone by using the hashtag #mobiography_49 on Instagram.