Landscape photography is the theme of this week’s Mobiography Flickr Group showcase. I have always had a soft spot for landscape photography, partly as I love to be out in nature, it is a place I can relax and unwind. Some of the highlights of this weeks showcase include Ludwig Wagner’s snowy country scene, Chris Harland’s scottish landscape and the reflections of Scott Woodward’s ‘Boshack Blues’.

Light Snowstorm on the Farm

‘Light Snowstorm on the Farm‘ by Ludwig Wagner – “I was on the family farm in Northern Ireland where we spend every Christmas when it started snowing and I ran out to take some photos with my iPhone5s. I prefer to use ProCamera with the HDR option for low light and cloudy landscapes, especially here in the UK where our days can be very dull and grey. I always save a LDR version too which I can adjust separately and layer in Superimpose if need be (sometimes the HDR images turns out too bright). In this case I only needed to adjust the ambiance of the HDR image slightly in Snapseed to ensure the white snow was pure white and adjusted the saturation to bring out the green more. I was lucky I guess, the effect was an almost surreal combination of only green, white & black. I then used the edger brush in Repix to enhance the black lines of the tree trunks and branches slightly. That’s all, I didn’t add any other effects or filters or remove any elements, and the snowflakes are as shot.”

‘Untitled‘ by Gianluca Ricoveri – “I took this picture last autumn at sunset not far from my house. I used VividHDR, and edited with Snapseed and Mextures.”

‘Prosperous in Discipline‘ by Paul Yan – “It was near the end of a photowalk in a botanic park near my home in Beijing when this image was made. Dusk was approaching when I discovered for the first time this corner of the park where the fallen leaves were layered on the ground to make up a yellow carpet. It was pretty dark already and as I hadn’t bothered to bring a tripod along, I had to reluctantly set the ISO to 400 (noise would be unbearably loud already at ISO 200 even on an iPhone 6 Plus in low light situations) in the ProCamera app; I set the shutter speed at 1/5 second; adjusted the white balance manually; focused on the nearest tree trunk, and tried to keep my hands steady while my lips pressed one of the volume +/- buttons of the earbuds cable to fire the shot. The image was edited in Snapseed’s [Tune Image] module: brightness, ambience, contrast, saturation and highlights slightly boosted with shadows slightly decreased.

While I was observing the trees and their fallen leaves to compose the frame, I envisioned monks and disciples of the Buddha listening to the awakened one’s teaching on how one can mindfully let go of one’s attachments and tame oneself to live in peace, joy and freedom, i.e. being “prosperous in discipline”. ”

‘Boshack Blues‘ by Scott Woodward – “I took this photograph at Boshack Outback, a farm stay in Bolgart, Western Australia. This was the final location of a 9-day advertising shoot across beautiful WA for Nikon, and our crew and I spent a night here photographing and filming on the sprawling 350 acre property. WA was filled with amazing adventures and breathtaking locations, and Boshack was no exception. I captured this image overlooking a small lake on the Boshack farm with my iPhone 6S and processed it using Snapseed before posting the picture to Instagram.”

Always do what you are afraid to do.

‘Always do what you are afraid to do.‘ by Flavio – “The picture was taken in Switzerland near Zürich on my daily walk with my dog. I really love the forest and specially with the light shining through the trees. I used a iPhone 6 and edited with HDR from Snapseed and a VSCO Filter. ” 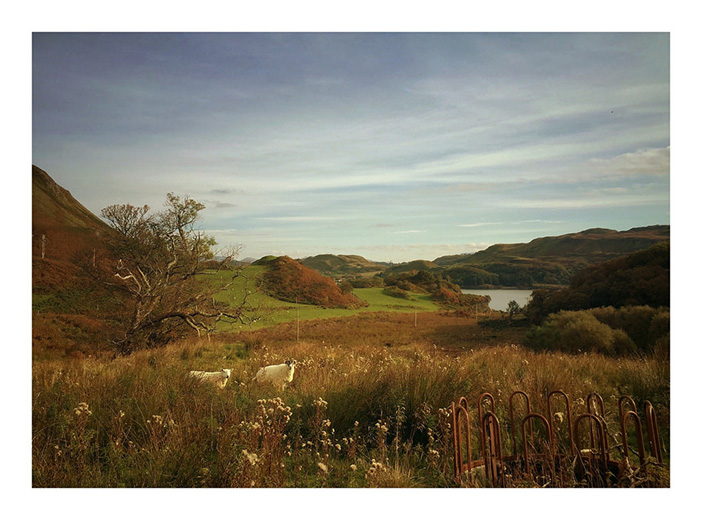 About the Image: As seems to be more often the case than not, I’d come to the Island of Kerrera (off the cost of Oban) with one objective in mind, but ended up with images of almost everything BUT that subject.

My goal was to make a picture of the beautiful Gylen Castle, perched precariously above the sea on the very Southern coast of this little island. Having got slightly lost on my way, I arrived at the spot I’d pre-determined to shoot the castle from to find that what initially looked to be a promising morning had clouded over and I was presented with a rather dull view….and though I managed a number of passable frames, I felt I had nothing truly exciting, and that Gylen Castle would have to wait for some future re-visit.

Rather dejected, and keen to ensure I made the last pre-midday foot ferry back to Oban, (and on to my next location) I turned back.

Taking a different route back I was presented with two unexpected and glorious views: firstly a distinctly ‘classical’, Turner-esque view of Oban from the Upper reaches of Gylen Park, and then, minutes later, this view of the lower slopes leading down to Little Horseshoe Bay. Upon reaching it I was met by these two curious sheep, and I knew I had the makings of a worthy composition, with enough elements to lead the eye through and around the picture.

Working the image, I had still in mind those echoes of Turner and Claude Lorrain in my mind, so finished the image with the richer, earthier tones you see here, and was keen to slightly soften the textures to add a kind of Arcadian glow, enhancing the ‘rural idyll’, atmosphere of an Island which – with no cars or roads – still feels true to that ideal.”

‘Tides out‘ by Gary Hayes