10 Beautiful Examples of Flower Photography Taken with a Smartphone

As we head into September and the summer begins to blend into Autumn (at least in the northern hemisphere anyway), I thought it would be appropriate for the theme for this week’s Mobiography Flickr Group showcase to look at a selection of beautiful examples of flower photography. From the vibrant colour of Gianluca Ricoveri’s poppy field landscape to painterly styled photo by Anne Highfield, this weeks showcase includes an awesome selection of images that all convey the beauty and colour that the humble flower holds.

?Let us know if you have a favourite and in the comments section at the bottom of the page.

Don’t forget Mobiography Magazine is currently running a new Instagram Tag Challenge. A selection of the best photos will be featured in the next issue of the digital magazine due out in October. To enter simply tag your Instagram photos with #mobimag10.

‘Sunflowers‘ by Elaine Taylor – “The simple fact is I adore sunflowers: sunny, happy, proud and bold. They are very special to me (there was no question they would be the theme for my wedding. I even persuaded my husband and his groomsmen to wear brown and yellow. Sounds awful, I know. But it wasn’t. Honest!).

This is one of a series of images originally inspired by the textured floral creations of Paul ‘Skip’ Brown (@skipology). Paul has been a huge inspiration to me and has introduced me to some fabulous apps, including Handy Photo and Stackables, which I used here.

The original image was shot through Hipstamatic (Sergio/Sussex). I tidied and extended the background using Handy Photo, then cropped and straightened the image in Snapseed. I also made some minor adjustments to brightness, contrast and ambience. Then I played around with some of the effects and formulas in Stackables to create more subtle tones and apply a layer of texture. Finally, I used the Union app to make the sunflower heads pop out of the texture.”

As you sit up, your soul comes back to you, and you forget everything. 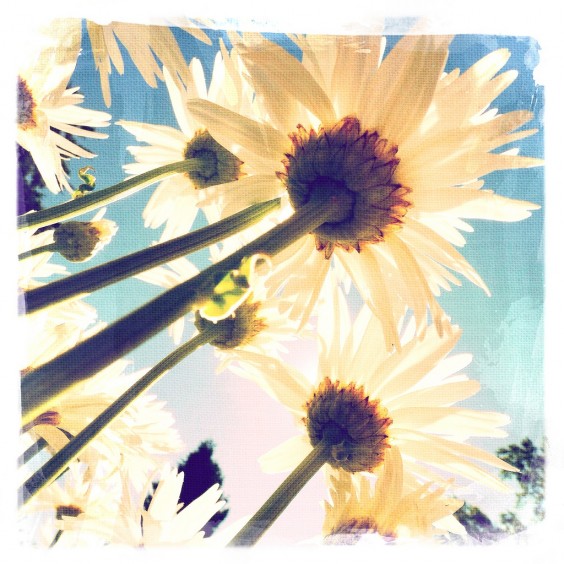 ‘As you sit up, your soul comes back to you, and you forget everything.‘ by Nick Kenrick

‘Rullino foto-2115‘ by Gianluca Ricoveri – “I took this photo in June in a country Lorenzana, about 30 kms from Pisa where I live. I tried to make it in a natural way the contrast of the field of poppies with clouds in the background and the green of the hills, so I used to shoot 6×6 and I did the editing in Snapseed.”

‘Seduction‘ by Jeffrey Simpson – “The inspiration for this shot is pure simplicity and the seduction of great lighting. I have an affinity for classic black & white and this image is minimally processed using Snapsed and Filterstorm Neue.”

‘Good morning!‘ by Mark Whitcombe – “We were house-sitting / cat-sitting for friends in downtown Toronto. Bleary-eyed the first morning, I was desperately waiting for the coffee to finish. I spotted these carnations backlit in an east window. Grabbing my iPhone, I opened my favourite camera, Mattebox, and quickly snapped this image. By luck — or happy mistake — I had overexposed the background and mis-focused on it as well. Instead of trashing the result, I applied a custom filter previously designed to accentuate snow squalls. This blurred over-exposed mistake is the result. ‘Good morning!’.”

Aren’t We a Pair?

‘Aren’t We a Pair?‘ by Anne Highfield – “This pair of flowers from my garden was in a vase on my kitchen windowsill and caught my attention one morning because of the way they seemed to be reaching away from one another, as if they were almost human. I moved them to my dining room window, which was getting a good bit of filtered light on that cloudy day. I used Pro HDR to capture the image. Then, I did some general editing in Snapseed, which included some minor cropping, brightening, a grunge filter, and a little saturation of the color. I saved this image as my base image. Next, I added some filters through Glaze to give it a slightly more painterly feel, and blended the Glazed image back with the base image. After a few layers of grunge from Mextures, I used Snapseed one more time to adjust the brightness and decrease the warmth a bit.”

‘Sunflowers at Kew‘ by Vivi (Veevs) Hanson – “I am lucky Kew Gardens is only a 10 minute cycle ride from me. Went to spend a few hours on a sunny weekday there, when it was nice and quiet and for once not too windy as I wanted to take close up photos of the beautiful flowers. This was in July so all the flowers were blooming! Took a photo of these beautiful sunflowers, there were so many of them! I took photo with Procamera 7. Then opened up photo in Oggl. Wanted to add more colour to the photo so edited it with VSCOCam and then DistressedFX”

I know I am but summer to your heart, and not the full four seasons of the year. Edna St. Vincent Millay

‘I know I am but summer to your heart, and not the full four seasons of the year. Edna St. Vincent Millay‘ by Nikki Vlatos