This week’s showcase of mobile photography looks at a selection of iPhone photos that use clever compositional viewpoints to create some interesting images. From Marco Lamberto’s ‘Framed’ which cleverly uses a pair of legs to frame the view of a lady on an escalator to Luison’s ‘Charlie Chaplin’ which make use of the reflections from a puddle to frame a Charlie Chaplin character in the street. The lesson this week is that there are so many different ways to frame a photograph which means there is almost always a photo opportunity available no matter where you are.

‘Untitled‘ by antoaurand – “This photo was taken just hours before the terrorist attacks on Paris, in my friend appartment not far away from the gunfight… That’s unfortunately one of the things that makes this photo quite special for me. The photo is a close-up/macro shot of an Ikea lamp, you know the one with a paper white lampshade. I was very close from the light, that’s probably why I was able to shoot a crisp photo by hand, without a stand. The idea was to capture the light (you can almost see it under the paper), and make a contrast with the dark lines of the lampshade.”

‘Charles Chaplin‘ by Luisón – “The background to this photo is very simple, as it is with all my street pics. Nothing is planned, people don´t know I´m capturing them. I usually walk around with my iPhone in my hand, ready to shoot, so when I saw this Charles Chaplin coming towards me, carrying a suitcase and with that sad expression on his face, I didn´t doubt it. I shot and got this pic.

Almost no editing at all, because I shot it directly on Hipstamatic (Jane lens and BlacKey Supergrain film). I used Snapseed to crop the frame and get a little bit of shapness. Nothing else.”

‘Victoria’s Victorious Monday‘ by Paul Yan – “I was photo-walking the eastern part of Beijing City one early morning when I came to this pedestrian platform beneath a pair of parallel overpass roads that led to The Forbidden City and Tian-?n-Men Square down the horizon.

In order to add perspective interest to the scene, I mounted the Manfrotto KLYP+ Wide-angle lens to my phone. Having manually set the ISO and shutter speed in the ProCamera app, I held and suspended my phone down to the pavement with the lens pointing up to simulate a dog’s point of view, composed the frame as a “trap”, the earbuds’ volume button between my lips ready to be triggered, and waited for my prey. Three minutes later, Victorious Victoria came in to play. The shutter was fired when she had her wide stride at the centre of the frame.

The photo was then rendered black and white in the Snapseed app. I then mildly darken the shadow areas under the overpasses with the brush tool, and applied vertical linear lens blur to give a feathery feel to the the Big V.” 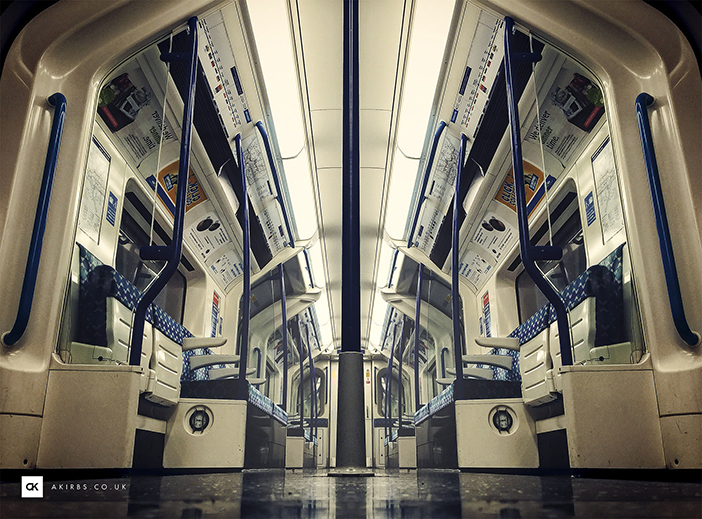 ‘Tube‘ by Andy Kirkby – “I’m an early riser so on occasion I’m fortunate enough to find myself in an empty tube carriage, something any Londoner will tell you is rare.

Taking photos of everyday scenes often works best if they are taken at a viewpoint other than eye level and being a designer I have an obsession with symmetry.”

‘318 / 365‘ by Luis – “This photo was taken recently at Copenhagen at the City Hall Square (Radhuspladsen) it was sunday and there was some kind of festivity and there was this band playing. The day was clear, no clouds and harsh light no way to take a decent photo. So I decided to take a picture of the silhouettes. I like the result and edited with Snapseed. I crop it, converted to B&W, enhance contrast, shadows and midtones to improve floor texture. I even like the little handprints at the right top.”

‘Napoli / Centro direzionale‘ by Raffamuffin Vibes – “This shot is one of a series of nine pictures made for #igers4Leicabuildings, a challange by igersitalia on instagram. The building is one of the Skycrapers of “Centro direzionale”. Completed in 1995 and designed by the japanese architect Kenzo Tange, is the only complex of skycrapers in Italy and southern Europe. I used my iphone6 and I edited the photo with snapseed increasing structure. The filter is noir and finally i adjusted the light with the native photo app.”

‘Framed‘ by Marco Lamberto – “I was going to work with Marzia Bellini @milkydrop when I spotted those shoes. We were on the escalator so I exploited Marzia taking a picture of the same shoes by standing still before me. I lowered a bit and used her jeans for framing the scene. I took a couple of shots trying to sync with the lights and picked up the better one. The editing process went through Adobe Photoshop Express (mostly for de-noise and clarity) and VSCO Cam for the final touches.”

I believe cats to be spirits come to earth. a cat, i am sure, could walk on a cloud without coming through. – Jules Verne

‘I believe cats to be spirits come to earth. a cat, i am sure, could walk on a cloud without coming through. – jules verne‘ by La_ma_rie