The theme of this week’s showcase of mobile photography from the Mobiography Flickr Group looks at a selection of brilliantly colourful photos all taken with a smartphone. From Scott Woodward’s vibrantly colourful train shot to the pastel tones and lines of perspective in Raffamuffin Vibes image and Sandra Becker’s abstract impressionist piece of artwork. All photos showcased this week illustrate how effective it can be when you open your eyes to the colour that surrounds us and how you can use that colour to contrast and highlight a scene. 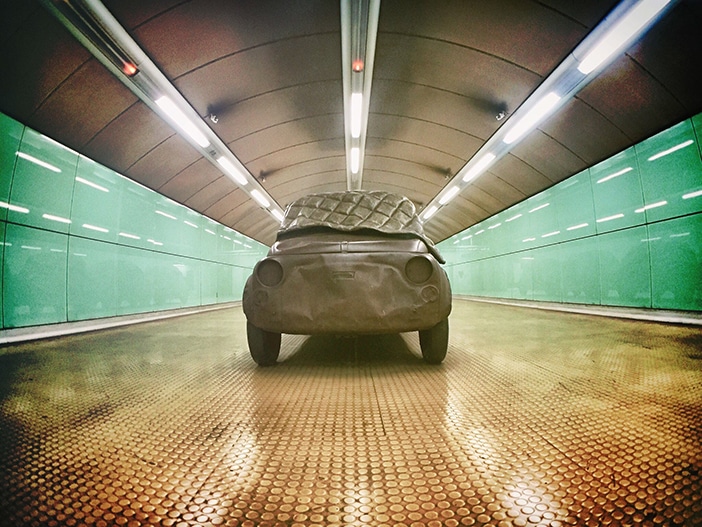 The correct title of this amazing art work is: A subway è chiù sicura / The subway is safer (2001)

In the picture you see only one of the four 500 that make up the work.

The official site of the Metro society describes in this way the opera of Perino e Vele : “Four well-loved Fiat Cinquecento cars in a line and covered with fibreglass and papier-mâché. The title of the installation The subway is safer sheds light on the poetic message: the metro is better than the car – it is safer and more ecological. ”

I took this shot with my “broken glass” iPhone6, using a 165 wide angle by Optrix , during a photowalk in Napoli together with my friends the #Chimps : Marco Lamberto (Polyml) and Marzia Bellini (Milkydrop). If you want, you can take a look at the #chimpsinnaples on instagram. I edited the pic with the native camera setting ( more point of black) and i finish the editing process with “vignette filter” by Enlight.”

‘Untitled‘ by Remi – “As I’m amateur iPhone photographer and I challenge 366 alway looking for the opurtunities to get some shot. It’s the eye to be train to recognize the right scenery. It was taken while waiting at local NCT Centre. Recently that warehouse were repainted and has attractive color. I liked the sun shine crates the shadows. More of my photos could be seen on Instagram @remrstr”

‘The Velvet Underground‘ by Scott Woodward – “Taken with iPhone 6S, Processed Using: Snapseed. I made this photograph on a recent visit to Japan. As I was rushing through Tokyo’s bustling Shibuya Station, I noticed the train conductor at the back of the subway step out of the final car and watch all the passengers disembark/embark before stepping back into his car and signalling with his gloved hand that it was safe to depart the station. It was a fantastic little scene — a brief choreographed routine that is repeated thousands of times every day at Metro stations across Tokyo — but it seemed to go completely unnoticed by the crowds rushing past. I decided to stop and wait for the next train to roll in, my iPhone in my hand. I didn’t need to wait long; within a few moments, another subway appeared, passengers flooded in and out, and the conductor drill was repeated. This time I was ready, quickly snapping a few frames before the train disappeared into the tunnel.”

Go with the Flow, Against the Stream

‘Go with the Flow, Against the Stream (National Center for the Performing Arts, Beijing)‘ by Paul Yan – “The National Center for the Performing Arts, a block from the western border of the Tian An Men Square, has been quite an intriguing work of architecture to me because the dome structure is surrounded by water. As the interior and roof lights are turned on, the water and the colors it reflected become all the more interesting.

This image was shot in a windy evening with the ProCamera app, in HDR mode, in my iPhone 6 Plus on a small tripod at the north side of the water’s perimeter. I remember having to knock down the EV for a couple of stops or else the app would choose an ISO that would be too high, generating an over-bright image with excessive noise. The phone’s earphone cable was used as cable release to fire a few shots. This one was made when the wind blew quite strongly and has the most ripples reflecting the lights in quite a dramatic manner.

Editing was done with the Snapseed app: [Tune Image] to increase Ambiance, Saturation and Highlights. Shadows was slightly decreased. [Selective] to enhance the water reflections and to darken the sky. [Crop] to cut away a portion of the sky purely for personal compositional preference.”

‘Sunrise Edinburgh‘ by Neill – “I work shifts and on a quiet shift I was driving in the north of Edinburgh and saw the sun start to rise. The longer I stood there the more colours appeared and the more amazing the sunrise was. My main attempt was to get a shot of the big ball of sun over the new flats and reflecting off the glass front. But I needed to wait a few minutes in between shots for the sun to rise a bit more. In these down moments I started taking close ups of rocks and pebbles with the sunrise in the background. One of which was he one I posted here. It was taken on an iPhone 6plus and tweaked a bit in snapseed to enhance the contrast and colours.”

‘Homage to Abstract Impressionism‘ by Sandra Becker – “This piece was inspired by the spontaneity and gestural action of abstract expressionism. The photo used was one I had used in three other totally different manipulations to get me to explore differing approaches to manipulating photos. I first turned the photo into a drawing in iColorama and Procreate where I applied areas of bright color. The image was then brought into Repix for much of the dripped and spattered brush effects. IColorama was then used to create a mixed up twirled effect for much of picture (Form>deform), the lettering & small flowers were then stamped on. Lastly I used Flowpaper for the white swirls and Lenslight for bright round spots.”

‘Lwów‘ by Marek Zajac – “I made this photo on my phone Nokia 625. I used the reflection on the hood of the car, which gave the effect of a curved line. The image was processed in PhotoScape. Lviv is an old and beautiful town in Ukraine. ”

It’s Wednesday, have some yellow

‘It’s Wednesday, have some yellow‘ by Olycow