Capturing the Moment in April – Edition 1

It’s been another strong week of submissions to the Mobiography Flickr Group. Choosing a favourite five has been tough. This weeks featured photos come from Petyrc, Andy Butler, MarDiet and Bobocinema’s stunning portrait ‘Local Hero’, and another from the Urban Isolation Series by Mark T Simmons.

As usual if you want to become a part of the growing Mobiography Flickr Group head over and sign up.

‘Local Hero’ by Bobocinema -“Take a picture of me” said my friend Accursio while we were doing the last test for the show that was going to start in a few hours. I took my iPhone 5 and shoot. He played Giuseppe Garibaldi, the Italian hero. The picture remained in the film roller. Unused. A few days ago, scrolling through the album I saw it again. I was inspired to develop it with various App (superimpose, scratchcam, picgrunger, Snapseed, etc.). And the hero has become a bigger hero. A Local Hero …

‘Urban Isolation #6’ by Mark T Simmons – “I shoot a lot underground as I find it mirrors London life perfectly. At times it can be so overcrowded that you feel like you just cannot breathe, sucked up and dragged along in the moment, while other times it can be so empty that it feels like the loneliest place possible. The image Urban Isolation #6 tries to capture that moment when you wait for transportation in one of the busiest cities in the world, only to find you are alone.

The image was created for a body of work I am putting together for Hipstography.com using only Hipstamatic films and lenses. The combination used was BlacKeys SuperGrain Film, James M Lens and no flash.” 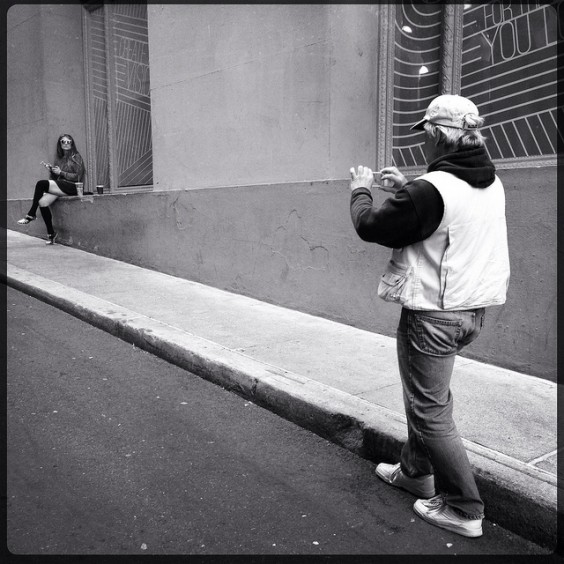 The Capture by petyrc – “I went out shooting in San Francisco with another photographer, Egmont Van Dyck, who runs the “The iPhone Arts” website. Egmont’s a very good street photographer and has no fear in getting the picture he wants.

For this picture Egmont saw a woman alone in the alleyway and saw a picture there. As Egmont approached her, I thought I would take a pic of Egmont taking a pic. I tried to quickly align myself to the best possible angle to catch the girl and Egmont in the same frame before she became aware of our presence. I was just lucky enough to catch the proverbially right moment.”

‘Texting Solitude’ by Andy Butler – “Texting Solitude came about during one of my lunchtime photo walks. At the end of the street I noticed a man stood against the wall of the town hall texting on his phone. There was a sense of loneliness about the scene, no passers by, no movement from the man, he was just deeply focussed on his phone. I hope I have managed to capture the feeling that I saw that day.

The photo was edited in Snapseed, converted to back and white with contrast adjustments before burning in the outer edges.”

No need for a title I

‘No need for a title I’ by MarDiet