Capturing the Moment in August – Edition 4

This weeks showcase features another fantastic selection of photography from the Mobiography Flickr Group. It is truly amazing to see such high quality photographic work being consistently put out there by the mobile community. This weeks feature includes work from Veevs3, Alon Goldsmith, Paul Brown, Patty Larson and Mohsen Chinehkesh.

‘Sightseeing is knackering!‘ by Veevs3 – “I was visiting Sagrada Familia in Barcelona and spotted this tourist fast asleep on a bench! I loved the way her camera was angled. I was able to get quite close up to take the shot 🙂

I imported original photo into Oggl (with the new update), removed the frame in Snapseed. Then tried out the 2 new brushes in Repix (chalk and cracks) and then used DistressedFX.”

‘Sol Savior‘ by Alon Goldsmith – “I have to admit I got lucky with this image, which is often the case because I like to shoot skateboarders from the hip without looking at the viewfinder. Somehow, the guy didn’t wipe out. Looks like he was saved by the sun. I shot this with my iPhone 5 using Oggl. The combo is Wonder lens with BlacKeys film.”

‘Vuela‘ by Patty Larson – “The creation of this self-portrait is for all women warriors, who have gone through difficult changes in your life, in this portrait is talk of patience (snail), about how hard it is to learn to be patient, tells us what must be strong (elephant), but once you do it you’ll have something beautiful in your life (butterfly wings on the eyes).

Dancing in the Streets of Lincoln on World Photography Day

‘Dancing in the Streets of Lincoln on World Photography Day‘ by Paul Brown – “This image is probably yet more proof that my iPhone is more an iCamera to me. My iPhone5 was in to be repaired and I was temporarily without a connected iPhone but still couldn’t wander the streets without a camera. This image was captured on my previous iPhone4 which is still loaded with apps and has wifi capability. I think I would have been lost without it even for a few days.

It’s an image of 2 people who decided to have a spontaneous dance to the music of the band in the background. I just happened to be wandering through the area at the right time and because this isn’t a very typical scene for me to stumble across I was really delighted. The only issue really is that I was in the wrong place. I grabbed a couple from a less than perfect spot and then fortunately managed to get to this position where I could tell the full story by getting both the dancing ladies and the band in the shot before they finished their dance.

Processing. Captured in Oggl, cropped slightly and converted to B&W in Snapseed.” 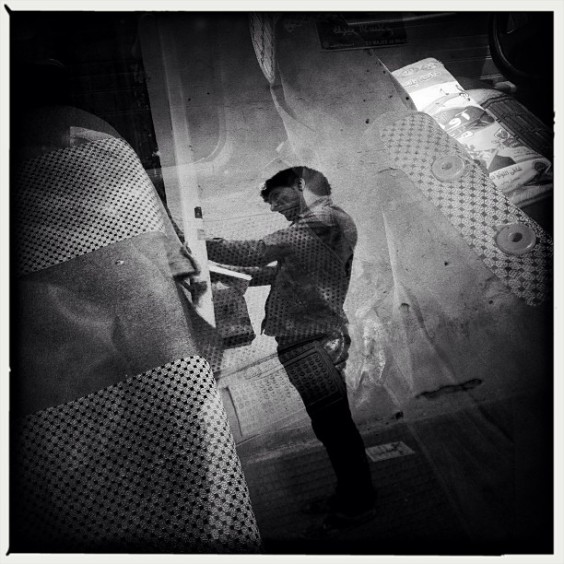 ‘Untitled‘ by Mohsen Chinehkesh – “I believe a successful street photographer should be able to use all the elements of urban life. Recently I’ve started to focus more on reflections. Reflecting surfaces let me blend two or even three simultaneous scenes in one frame. The photo is a Hipstamatic shot and no further editing was applied.”

Do you have a favourite?