This weeks Mobiography Flickr Group showcases a selection of amazing black and white iphone photos. These ten images illustrate beautifully how black and white photography can be used to stunning effect. From the high contrast in dr pajchiwo’s ‘Street of Mind/In the Spa 1’ to wonderful connection you get with the portrait of a Haitian boy by Darrell Jesonis.

‘Untitled‘ by Federico Racchi – “These photos are from my travel series to Buenos Aires, Argentina. They are taken with the ProCamera App and editing with Noir app.”

street of mind/ in the spa I

‘street of mind/ in the spa I‘ by dr pajchiwo – “For the most part I don’t plan my photos in 100% – just I know when and where I go, but I like an improvisation and the surprises during my photo walks. They give a taste to the all process…

I’m nevertheless arranged the most of details this time – the place, the moment, the row of the pillars giving the string of the shadow and the light; even the point of view.
But the all things not for this photography…

This one I planned just as a common portrait of my daughter (in the same place and moment), but during the editing I noticed that right the photo is more expressive, more dynamic and less affected! And the added (= accidental) value – the people’s reflexion on the right!

So, taking photos DON’T expect the unexpected – it will find you anyways…

The photo was taken with Soviet Kam (the camera app for Windows Phone) on Nokia Lumia 800; cropped and edited with Fhotoroom.”

‘Tokyo‘ by Brendan Ó Sé – “I took this on a subway train in Tokyo. This elderly gentleman was sitting opposite me on the train. I am always struck by older people in the pride they take in their appearance. I really liked this guy’s hat. I wanted to get him fully in frame so I placed the iPhone on the floor, as discreetly as I could in an effort not to draw his attention, and clicked. The sunlight streaming through the window gives the image a nice dreamy feel to match the man’s contemplative look.
I used Snapseed to crop in square format and convert to black and white. ”

‘Haitian Boy at local church‘ by Darrell Jesonis – “My friends and I first went to Haiti in 2010. We have a friend named Roberteau Desilomme who is the head of ‘Ywam Mountain of hope ministry’. He lives in a small farming community in the mountains of Fond Baptiste, Haiti. Since our first trip we have been performing construction projects for his base facility, and more recently have expanded the work with other churches in the States to do construction projects for churches in Fond Baptiste’s. This image was taken at a local church while our team was putting a metal roof on the church. In Fond Batiste when an event like this happens much of the community shows up to offer help and see what the commotion is all about. This little guy and his friends actually helped carry the metal sheets for the roof from the truck up a hill. We set up a tarp near the construction site and sang songs with the children and played games to help with math and English skills. This little guy seemed really intrigued by me and wanted to see a picture of himself. I shot this using an iPhone 5s, Hipstamatic App with a Florence Lens and Black Keys Extra Fine film. These children have nothing, but they are full of all the wonder and happiness that one would associate with childhood. Matthew 19:14”

‘Untitled‘ by e_rnst – “This last summer I visited the city of Salamanca in Spain for a couple of days trying to capture some interesting pics.

I was walking in the old town when I saw this boy with a cap and the big headphones, it was a narrow street full of tourist so I tried to isolate him. I noticed this big wall with the circular window and I used it for make the composition.

The shot was made it with Hipstamatic app (Blackeys Supergrain and Lowy lens combo) and I edited it with Snapseed adjusting contrast, pushing up a little bit the grain and adding the frame. That´s all.”

‘Untitled‘ by lee atwell – “This photo was captured at the end of the day at the Seattle Art Museum Outdoor Sculpture Park. I was captivated by the dance of the shapes of the shadows and the ‘fan-like’ metal sculpture mounted on the cement wall, when a man walked by carrying an orange construction cone. I used the Hipstamatic app with Watts Lens and AO Black and White Film.” 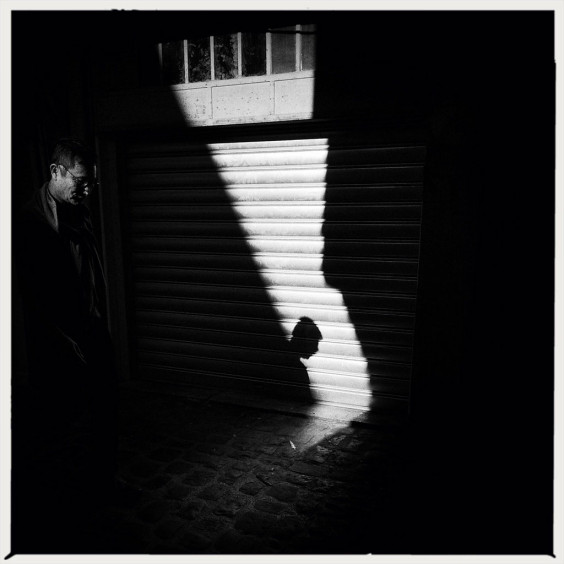