Albion is up there in my top 10 list of mobile photographers from this year. There is a beautiful quality about the photographs he takes which mainly features black and white hipstamatic style images of urban and and street scenes. His photographic signature style balances the heavy contrasts between the dark shadows created by the strong Australian sunlight. Albion has been featured in several Capturing the Moment showcases as well as Mark T Simmon’s ‘The Photo I Am Most Proud of‘ and ‘More Than Just a Snapshot‘ series 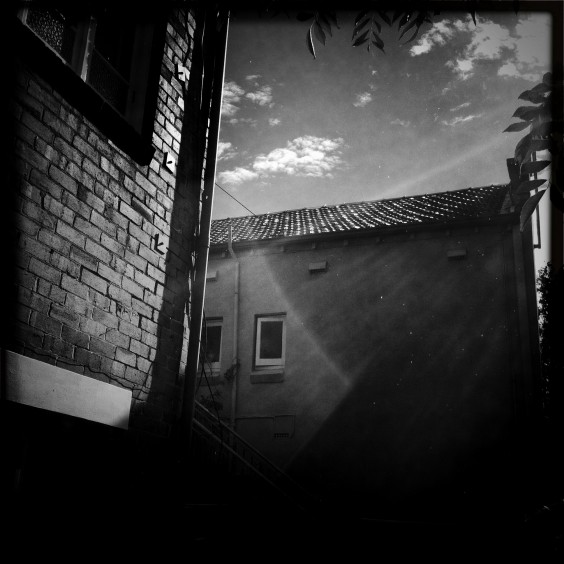 First off I would say have fun. Remember that despite the craft side of photography and technical skills, it is also an art. And art requires play, expression and experimentation. So have fun, play with it, try new approaches and let your imagination take flight. The more you open yourself to different ways of seeing the more you allow for learning and those serendipitous moments of discovery that really help one’s growth.

Linked to that would be to do it as much and as regularly as possible. In this day of digital photographs, you can take as many as you’d like and it can be useful to go through moments where you take a shot of anything and everything that interests you. If you think it might be a good photo, take it. You can always delete it later. I found that taking shots regularly, most days where possible, and scanning through them at least once very soon afterwards, really helped me learn what I was doing much more quickly. Not that you ever stop learning!

Which brings me to another important tip. Learn to assess your own work. In many ways I suck as judging my own work, but I usually know when a photo is a bit shit, boring or just not quite there. You need to be able to divorce your pleasure in taking it, or perhaps in achieving something specific you were trying for, from what the overall impact of the image is. Is there really enough interest to it?

Two last tips would be to always remember the importance of light to photography. Light is what you are using to make the image and the ways in which differing types of light impact on the photograph are essential to understand. Lastly, look. Look at the world around you and look at other photography and art. There’s a ton of it easily accessible in libraries and on the internet. If you like a photo, try and understand what about it appeals to you.

The shot I’ve chosen to illustrate these points is a very early shot of mine, taken early last year. A quick explanation of how it relates to some of my tips;

I was taking shots almost every day at this stage, even if they were just of things around my flat or on the way to work (ok, ok, not much has changed…). This shot was taken in my back garden after days of rain, as the sun came out. I took the opportunity to duck outside and take a few shots for quarter of an hour. As I made my way to the back of the block of flats, a bit more rain sprinkled down and I thought it’d be nice to catch some of those drops in the sunlight that was still shining. So I gave it a go. As I was playing with how best to capture the mood of the moment, I noticed that the sun on the brickwork was good and I remembered that I’d seen some hipsta shots of brickwork and how great the tones in that could be, so I shot in that direction. I’d already started shooting into the sun occasionally but mostly in the hope of gaining a good silhouette, but here pointing towards the light gave me that lovely conical ray of light cutting across the image, which interplays nicely with the angles created by the two walls. Playing with the way lens flares can become part of an image is something that I became increasingly obsessed with shortly after this. I say I thought these things, but to be honest I half thought them. My final piece of advice, trust your instinct.