The theme for the last Mobiography smartphone photo challenge was ‘Symmetry’. For this challenge the Mobiography community were asked to share their best mobile photos of symmetry be that with the use of reflections or compositions that create balance in the image. Here is a small selection of photos that were tagged for this challenge

To enter the challenge simply start sharing your best images on the theme of ‘Connections’ that were taken and edited with a smartphone by using the hashtag #mobiography_challenge_136 on Instagram.

‘Barcelona’s extraordinary Palau de la Música‘ by @allophile – “Among the many Catalan modernista buildings in Barcelona, this concert hall designed by Lluís Domènech I Montaner in 1905 is one of the most stunningly joyful structures that I’ve ever been in. It is definitely worth the cost of the architectural tour to be able to appreciate the interior. The main auditorium is the only one in Europe that is illuminated entirely by natural light, largely via its stained-glass ceiling, with its perfectly symmetrical choir of female singers surrounding an inverted dome that distills the Mediterranean light. With its colors and rhythm, this ceiling is truly music made visible.

I took this photo with my iPhone 5, (it’s been a few years), standing directly underneath the center of the stained glass—the daylight was enough to illuminate the details. I used Snapseed for only the slightest bit of ‘digital dodging and burning’ and cropping.”

‘V u e l t a s‘ by @alopezc72 – “This is a photo of the stairs of an old building in Valencia downtown. I was visiting a friend and realized that the stairs architecture was amazing for a photo… so instead taking the elevator I did some exercise looking for the best point of view. Only little edition of lights with Snapseed.”

‘A floating pier on Krabi Thailand beach‘ by @aniraz95 – “This photo was made during a trip with girlfriends to a beachfront resort in Krabi, Thailand in April 2019. The resort is secluded in a bay and surrounded by a national park, accessible only by boat, and there is no jetty except this floating pier. I was very excited to take photos and on the first morning, at first light, I was already out on the beach hunting for subjects to photograph. I always love the cool, dark early morning time of day when the sun is still below the horizon. The colours that day were amazing; emerald green water in the dark orange-ish sky. The floating pier was bumping gently and I got my shot of the day!

I made slight edits on Snapseed mainly to bring out the details of the rock in the mid-background and increase slightly the general brightness as the photo was quite dark.”

What a beautiful subway station!

‘What a beautiful subway station!‘ by @detailsofberlin – “The photo was taken in one of the many subway stations of Germany’s capital Berlin. It was taken with my LG Velvet which comes with an amazing wide angle lens which is perfect for architecture shots. I didn’t do much editing, since I try to shot as perfect as possible. But I usually like the photo brighter than it comes out of cam, so I changed that and edited as usual with Enlight and VCSO. ”

Scenes from the weekend

‘Scenes from the weekend‘ by @hipstamonica – “I shot the image with my iPhone XS Max and used the Hipstamatic app to edit it. The photo was taken in La Jolla, San Diego – CA.

I love going to the La Jolla tide pools area for sunsets because of the variety of things I can capture there. That day I wanted to get pictures of the silhouette of rocks and sunset reflections on the tide pools. When I found the perfect spot, this boy got right in front of me, hunting for hermit crabs. I waited a little while hoping he’d leave soon, but he didn’t – so I decided to use his silhouette and reflections. I’m so glad I did, he made my pictures much better that night!”

‘Surf’s up‘ by @itisi_siru – “I’d been taking some beautiful timelapse videos using my iPhone and the Skyflow app of the clouds reflected in this puddle for a number of consecutive days. However on this particular evening I had decided to take some still photos. It was a great decision as a steady stream of people ended up passing by the puddle, perfectly reflected in the water. I went with this pic of the “surfers” (actually paddle-boarders) as it reminded me of a scene from California. As usual, I processed the photo using the Photoshop Express app.”

Under the mystery of the road junction of the Trinity 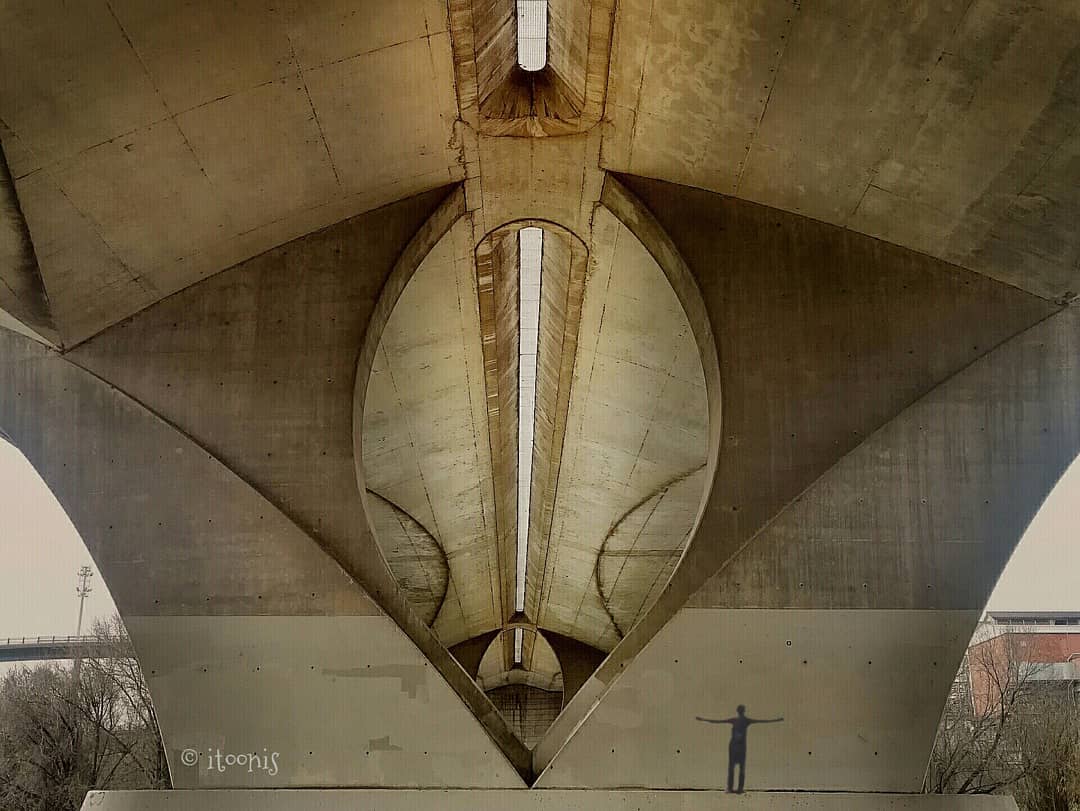 After the construction of this bridge in the photograph, the traffic problem was solved and everyone said: The mystery of The road junction of the Trinity knot has been solved.
The photograph was taken with an Honor 7 phone and edited with Fotor and Pixlr.”

‘Untitled‘ by @jm_ragsdale_photo – “DC architecture provides limitless photo opportunities. On every trip I try to explore different areas. This was taken at Union Station early in the morning before it became busy. The arched ceiling is a fascinating work of art and structure. Shot on iPhone 7s in noir mode. This seems to accentuate the lighting and details. The row of statues provided an excellent silhouetted foreground for the image. ”

‘I Love Rain‘ by @redkuku_red – “Recently I have been out in the rains, a lot. Once I got caught in a sudden downpour, so heavy that I had to take shelter in a subway entrance with my trusted umbrella to shield me from the slanting rainfall. The pattern against the light and rain caught my eye. It is then I took this shot with my iPhone. My bias towards black and white photography shows again. Simple, attractive and delightful… Symmetric!.”

‘Aligned‘ by @jawdoc2 – “These are two images I took on my iPhone 7 plus. The first was a simple silhouette and the second, a person walking in a pedestrian underpass. Initially I converted to black and white and then increased the contrast. I then had some fun with the double exposure feature, all in Snapseed. Symmetry and the leading lights worked really well together.”

End of the line

‘End of the line‘ by @_plantmyheart_ – “This photo was shot at the Pamlico Sound on the Outer Banks of North Carolina at sunset. It was a lucky catch for me and the local fisherman, supplementing his regular income with this side-gig. He was pulling in fish with a cast net and filling plastic laundry baskets. The evening lighting, awesome symmetry, patterns, and silvery fish were hard to ignore. While my kids were occupied poking and examining the fish, and peppering the fisherman with questions, I ran back to the car to grab my phone (Samsung 10e). The photo was edited with Instagram’s tools. I boosted contrast, sharpness, and saturation, applied the lo-fi filter, and then added significant vignetting to highlight the fish and create a “tunneling” to draw the eye inward.”

‘Time To Reflect‘ by @emmafwright

To enter the challenge simply start sharing your best images on the theme of ‘Connections’ that were taken and edited with a smartphone by using the hashtag #mobiography_challenge_136 on Instagram.