This weeks Mobiography Flickr Group showcases a selection of iPhone photos that feature ordinary objects which are photographed in interesting ways. From Steve Hynds Hipstamatic Tintype photo of a box of handwritten recipes to a selection of vibrantly coloured door handles, I think this weeks selection illustrates how even the smallest of objects can make beautiful subjects and compositions.

‘Wherever you are‘ by Tomaso Belloni – “I was visiting friends for a couple of days and they had this wooden mannequin in their living room. It was trapped inside a glass bell, set in this position of the one who is looking for a way out. At the time I was feeling more or less in the same way and how I feel always finds its way into my photos. I looked for a way to get a good shot, but the light was not good. Then some hours later sunlight came through the window and created that rippling shadow going through the glass bell, which I immediately noticed and did not miss. I got exactly the effect I wanted, I can almost see the expression on the face of the little fellow. I hope he managed to escape.

I shot with the default camera app on an iPhone 5 and edited with snapseed and mextures on an iPad mini.”

‘Window‘ by tania_konnerth – “I took this picture in Willemstad, Curaçao, a small Caribbean Island. This wooden sealed window immediately caught my eye. It was just a small alleyway and I did not expect the light to be any useful. But actually it was beautiful and it brought out the special colors so well. I used Hipstamatic for it (lense: Jane, film: Blanko), no additional editing.”

‘Smiling door knocker thingy‘ by Andy Butler – “I took this shot earlier this year on a fmily holiday to the beautiful island of Mallorca, Spain. I was struck by the tonal quality and texture in the door and the rustic feel of the door knocker surrounded by etchings of names and symbols. The photo was shot with Oggl using Jane lens and Sugar film, two of my favourite film/lens combos.”

‘Annecy, France‘ by Cecily Mariece Caceu – “While traveling in France this summer I saw this scene and could not pass it by. To me it is the quintessential view of how “Old Europe” should look but this scene had a slight twist to it. The juxtaposition of old and new is what attracted me … old architecture, lace curtains and then some random graffiti thrown in. This sort of sums up Europe to me in a nutshell and is why I love to travel there so much! I wish Americans would embrace wooden shutters more! This image was taken with my iPhone 5s native camera, and processed lightly with snapseed.”

‘Recipes!‘ by steve hynds – “I have some tins of handwritten recipes and the labor behind the efforts of the long ago home cooks interests me. Many of the recipes are likely family favorites handed down through the generations. I enjoy taking objects that don’t usually draw attention to themselves and elevating them in importance with a “studio” setting photo, even if my studio skills are meager at best. Shot with iPhone 5S and Hipstamatic Tintype against a backdrop of oily shop rags under a fluorescent shop light.”

‘Frappez fort‘ by Ichut – “The eye is attracted by the peculiarities of doors during movement urban. There is often a geometry and attractive colors on doors. This image was taken with Hipstamatic at Poitiers, France”

The time between accidents 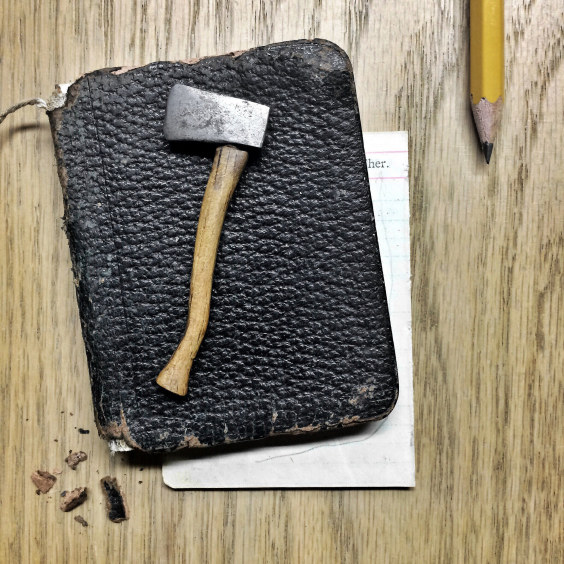 ‘The time between accidents‘ by pictrola – “I love tiny objects, and fell in love with this axe, but for the longest time couldn’t find a composition or background I felt showed off its scale, detail, or that told any type of story. One night I was determined to figure out a solution, and that’s when I stumbled across a tiny book I had used in a previous image. Everything started to fall into place. The book, circa 1921 is falling apart. I broke down its corner to mimic the wood shavings created when using an axe, and pulled a out a page slightly to reveal part of a word and a scribble. The pencil is the device used to document the life of the axe. I wanted the viewer to guess what the owner of the items looked like, and to draw conclusions as to what they may be used for.

I arranged the objects on a old wooden plank and shot them with ProCamer7 for iOS. Perfectly Clear was used for initial image adjustments, then it was opened in Snapseed to enhancee the contrast, and add +38 of the Drama Filter. I used Color Manager to remove a trace of blue that was present in the book cover. The ambiance was increased +43 in Snapseed, and unwanted specks were removed with TouchRetouch.”

Diary of a light snob

‘Diary of a light snob‘ by Ryan Vaarsi