Ryan Vaarsi’s photography captures the street scenes and characters that frequent them. He is a Juxter and has been featured in Mobiography ‘s Capturing the moment and Mark T Simmon’s proud of series.

The Photo I am Most Proud of is… 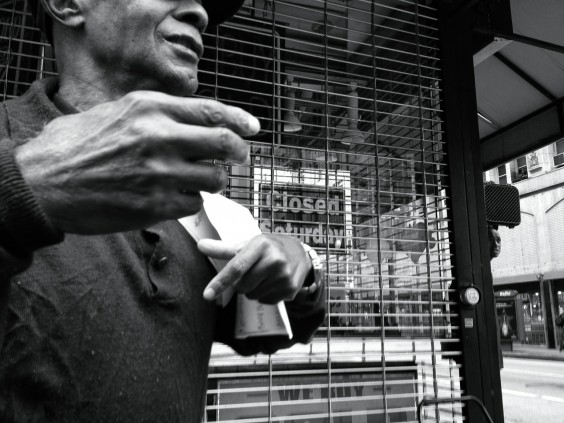 I’ve heard it argued, compellingly if also cynically, that street photography is middle-class wankery. Privileged folk using expensive toys to photograph those less fortunate than themselves. And some of it is. But street photography can also bridge the gaps that exist between most of us, regardless of socio-economic status. This photo of Elbert–a man with whom I’d otherwise have never interacted and, if I’m being fully honest, might have gone out of my way to avoid–resulted from the moment when I first made that connection.

Camera-in-hand, my inclination is to be a fly on the wall. Not because I find that approach aesthetically superior to others, but because I have the social skills of a distempered wolverine. And so I hover, I snap. I attempt discretion, with mixed degrees of success. I like the idea of capturing people unaware, when they’re behaving “naturally.” But the other way, the direct approach, the hand shake, the street portrait–I respect that and intend to do more of it.

In June I took part in a workshop put together by the founders of the 24-Hour Project, Sam Smotherman (@whittiersam) and Renzo Grande (@aliveinnyc). I had signed on with the express intent of demolishing this damned weird fourth wall I’ve constructed around myself. I spent the morning wandering with Robert Stacey who, it should be noted, is a photographer of outrageous talent. His blog, http://visualwhiplash.com/, is awash in Magnum-caliber photography.

Robert and I encountered Elbert near the halfway point of our stroll (of which more is said here). I don’t approach strangers easily, certainly not strangers who are standing on a corner in downtown LA brandishing hand-written screeds touting a sort of bespoke Islam. Elbert’s not a physically imposing man. He’s small and life has had its way with him. He looks a bit older than his 73 years. From a remove, which is how I might otherwise have opted to photograph him, his energy seems a little skewed, vaguely manic. His smile could be interpreted in a few different ways and he seemed a little too eager to present me with his hand-made tract (I think we’re referring to this sort of thing as Locally-Sourced Philosophy these days).

But Robert took the lead and broke the ice. And the simple act of speaking with Elbert –a man who 9 people out of 10 would ignore or consider a nuisance–and taking his photo with his consent changed the way in which I approach street photography.

Each of us has a story and each of those stories has value. The process of making first contact, offering some of yourself in exchange for some of them: it’s an alchemical thing that doesn’t clarify under scrutiny. Taking this photo helped me realize how dearly I enjoy the act of making those connections, even if I’m still tripping over the first few steps to some degree.

Elbert’s life has been less than easy, but that’s not the point. The quotient of happiness we’re each allotted in this life varies wildly and the harrowing tales are not always the most interesting ones. It’s the act of telling the tale, of being allowed to tell it by the person who’s in the process of living it, that I find so compelling.

Understand that this is not some sort of Razor’s Edge moment, I’m not headed for the hinterlands to live in a yurt and drink fermented yak’s milk. My approach to photography hasn’t done a 180 so much as a 90. I find myself better able to engage with the people I photograph. I’m still not a natural ice-breaker. For whatever deeply-neurotic reason it still takes me a concerted effort to make that initial connection. I’m training myself to slow down, to not run after the photos but let the photos come to me. My fervent hope is that this will create the kind of serendipitous territory in which the connections almost make themselves. And if that happens, then it started with this photo.